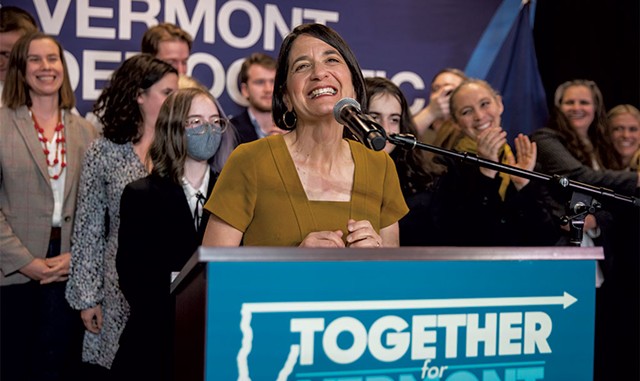 For the first time in Vermont’s history, voters have elected a woman to Congress. Democrat Becca Balint, a state senator, cruised to victory on Tuesday night over Liam Madden, a self-proclaimed independent who ran as a Republican.


Around 10 p.m. on election night, Balint took the podium to declare her victory to hundreds  of Democratic supporters who had assembled at Hula in Burlington. Her triumphant message had an undercurrent of darkness, a recognition of the deeply polarized climate in which she'll begin her term as Vermont's first congresswoman.

In Washington, D.C., Balint told reporters, she believes she can bridge political divides by appealing to the better instincts of Republicans who have rejected Trumpism.

"What I know is people are people," Balint said. "As I talk to my soon-to-be colleagues in the House, they say that the Republicans, the backbenchers, they know what's going on. They don't like it. And they don't know how to have the courage to stand up and do something differently."

Meeting Vermonters during her campaign, she told her supporters, restored her faith in the possibility of a more humane politics.

"We believed that we could reject cynicism and run a grassroots movement that could be fierce and joyful," she said. "I know that Vermonters believe that politics can be different."


Balint, the first openly gay person elected to represent Vermont in Washington, said people told her during her campaign that she wouldn't succeed in her bid for office as an out lesbian.

"I am so proud that we didn't listen to people who said an openly gay woman could not run statewide and build a broad coalition, and we did," she said. "So I think we can be a beacon of hope in the nation that we can move beyond this horrible, horrible cultural war we're having right now." 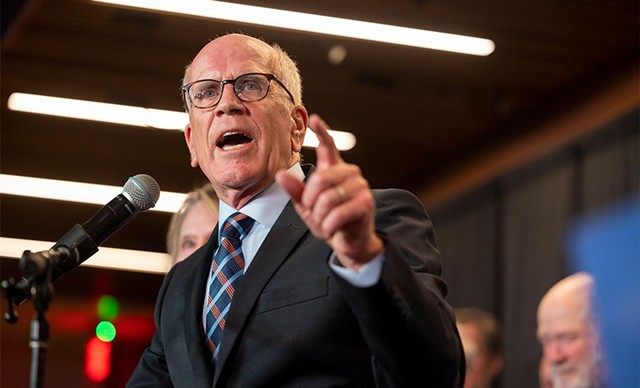 It was a successful night for the Dems. At Hula, retiring U.S. Sen. Patrick Leahy (D-Vt.) and wife Marcelle made an appearance, as did U.S Sen. Bernie Sanders (I-Vt.).

In Vermont's other congressional race, U.S. Rep. Peter Welch (D-Vt.), who has served as Vermont’s sole delegate in the House since 2007, easily won his bid for the seat held by retiring Sen. Leahy. The Associated Press called the race for Welch at 7 p.m. — exactly when the polls closed.

He defeated Gerald Malloy, a Trump-endorsed Republican and first-time candidate.

Leahy, wife Marcelle, Sanders and his wife, Jane O'Meara Sanders, were among those on hand to listen.

Leahy offered a few remarks to congratulate his newly elected successor, while Sanders took the stage to denounce billionaires, the greed of the fossil fuel industry and the lack of affordable health care.

In his speech, Welch addressed the significance of this election in ensuring the survival of democracy and highlighted Vermont's history of fighting for justice. 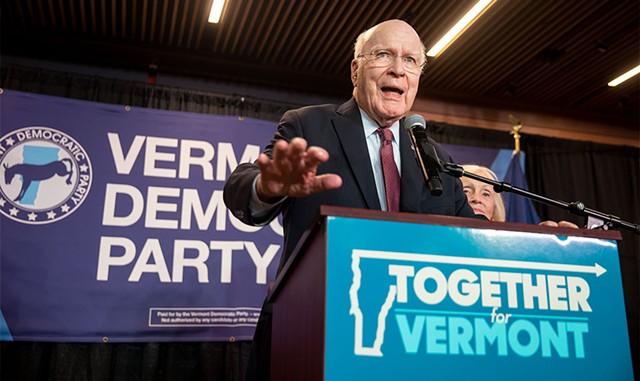 "Ours was the first state, in its constitution, to ban slavery, and during the Civil War, it was Vermonters, more than any other state by population, who enlisted in the Union to save our union and to abolish slavery," he said.

And Welch made an appeal for what he described as the Vermont approach to civil public discourse as an antidote to division.

"We understand that listening is more important than talking," he said, "and that by having an approach where we seek the common ground for the common good, we can make a better and more just society."

The contest between Welch and Malloy presented voters with a stark choice. Malloy, who tried to elevate his profile by appearing on right-wing media programs such as former Donald Trump aide Steve Bannon's "War Room" podcast, said during a Vermont Public primary debate that he "wished" he'd been at the U.S. Capitol during the January 6 insurrection.

Welch, who was in the Capitol building when the mob stormed in, retorted that he wished the violent events of that day "had never happened."

Balint, who represents Windham County as a state senator and served as president pro tempore of the Vermont Senate during the last legislative session, was also a starkly different choice than her general election opponent. While she likely won't have much clout as a first-year representative, Balint will be a reliable Democratic vote on major issues. She has a progressive bent, which earned her primary election backing from Sanders and Sen. Elizabeth Warren (D-Mass.)

But Balint pulled ahead in the final stretch of the primary, aided by $1.6 million in political action committee spending and her readily visible track record in the Statehouse on the issues she has promised to champion in Congress.

How Balint Won — and Gray Lost — the Democratic House Primary
By Chelsea Edgar
Politics
In the run-up to Election Day, Madden, who made his critique of the two-party system the centerpiece of his campaign, attempted to cast Balint as a well-meaning but fundamentally entrenched politician.

A former Marine who made a name for himself in the early 2000s by protesting the Iraq war, Madden’s penchant for iconoclasm appears to have extended to his interpretation of campaign finance law. On October 27, he admitted during a live radio interview on WVMT’s "The Morning Drive" to funding his bid for Congress by draining his wife’s business bank account and redistributing the money to various family members, including his 3-year old son, to “donate” to his campaign.

He employed this creative accounting technique, he told "Morning Drive" hosts Kurt Wright and Anthony Neri, in order to qualify for primary debates with a minimum fundraising threshold, a participation requirement that Madden “thought was BS.”

Veteran, Anti-War Activist and GOP Congressional Candidate Liam Madden Defies Labels
By Chelsea Edgar
Politics
In an interview with VTDigger.org, the director for federal campaign finance reform for the Campaign Legal Center in Washington, D.C., called Madden's scheme “so blatantly illegal”; Madden has publicly insisted that he did nothing wrong. "I thought I was using a loophole to get around a totally absurd rule to disqualify and marginalize candidates without huge donor lists and networks of elites," he wrote recently in an op-ed published in the right-wing Vermont media outlet True North Reports. "I’d do it again."

The Federal Election Commission has so far taken no enforcement action against him.