For years, Donna and Travis Jocelyn have wanted to sell their New North End home and downsize to a condo with lower property taxes. In February, the couple finally found a buyer for their 1970s ranch house and was about to purchase a brick townhome in Essex Junction, closer to where their 10-year-old daughter goes to private school.

Then came a bizarre twist: The buyer's attorney did a title search to make sure there were no unpaid taxes or other claims on the property and discovered that the Jocelyns didn't actually own the land their house sits on. By virtue of an obscure centuries-old document, it belongs to the City of Burlington.

To get a clean title and complete a sale, the couple needed the city to relinquish its claim on the land.

The Jocelyns, who live on North Avenue across the street from the J.J. Flynn Elementary School, aren't the only Vermonters residing on what's called "lease land." Whether they know it or not, a number of homeowners in Burlington and around the state could face similar legal complications.

"Our guess is, this is going to affect hundreds, if not thousands, of Burlingtonians," City Attorney Eileen Blackwood told the council on Monday night.

Vermont's lease land dates back to the 1700s, when the governors of New York and New Hampshire — who acted under the authority of the crown of England — set aside plots to be rented in order to raise money for distinct purposes. Income from leases on what was called "glebe land" went to the Church of England. (Glebe likely comes from the Latin word gleba, meaning a clod of soil.) Schools also received proceeds from lease land.

The leases, which often contained provisions allowing the lessees to occupy the land for "as long as grass grows and water runs," were essentially permanent. And while colonists couldn't sell the land on which they settled, they could sell the leases to it.

After the Revolutionary War, individual towns took over responsibility for the lease land. They continued to remit money to schools but, with the separation of church and state, stopped using it to finance religious institutions.

In the ensuing decades, most towns stopped bothering to collect the rents — typically a pittance in today's dollars — and switched to levying property taxes. But the practice, though largely forgotten, was never outlawed or otherwise removed from state statute.

Paul Gillies, a Montpelier attorney with an affinity for the arcane, describes it as "a historical anachronism with a little bit of punch yet left in it."

He said he gets a handful of legal inquiries about lease land each year, and the conflicts occasionally end up in court. As in the Jocelyns' case, the questions usually arise when property is changing hands.

Twenty years ago, attorneys rarely flagged it, according to Gillies. But in recent years — as part of what he describes as "an evolution of ever more restrictive analysis of the record" — "some title attorneys have made this an issue because they regard it as a defect of title," Gillies explained, noting that attorneys are exercising more caution because they can be held liable for overlooking potential problems.

The Jocelyns' attorney, Jonathan Stebbins, has noticed this change, too. "The issue has really been a hot topic in the last year," he confirmed. His firm recently handled several similar cases in Fairfax, but they were quickly resolved when the town agreed to sign quitclaim deeds.

Stebbins was reasonably prepared when the people trying to buy the Jocelyn property called him about an 1885 deed identifying a 12-acre wedge of land, including the Jocelyns' 0.1 acres, as glebe land. Written in neat cursive, the document states that the land is "subject to an annual rent of $1.65 payable to the City Treasurer on the 1st day of January each year."

Stebbins responded by asking Burlington for a quitclaim deed, with which the city would relinquish any claim to the property and transfer ownership to the Jocelyns.

Blackwood said her office has gotten similar, albeit simpler, requests — for example, to sign a letter forgoing rent collection. She and her staff spent weeks researching how to respond.

Legally, nothing was preventing the city from giving the Jocelyns the deed to the property. In the 1930s, the Vermont legislature passed a law allowing towns to transfer ownership of lease land.

But the law's wording was ambiguous about whether towns had to charge money for the deed. And there were other factors to consider: By giving up lease land, Burlington would also be signing over rights to its underground resources, such as minerals and water.

Further complicating the city attorney's research: Like many municipalities, Burlington hasn't kept reliable records of its lease lands. Blackwood and her staff have been trying to figure out just how much lease land Burlington has, and where it's located. 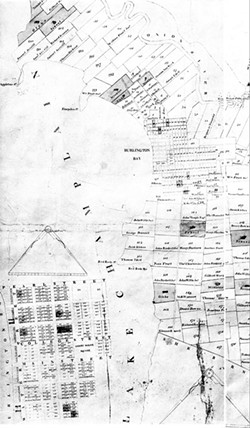 "We've been digging through old dusty volumes," Blackwood said. Last week, she brought a reporter into the vault room in Burlington City Hall where land records are kept in hefty red books stacked to the ceiling. She took out a laminated map from 1810 that shows the shaded rectangles marking lease land. The map has no street grid, making it tricky to figure out how those shaded blocks correspond to current-day properties.

The largest sections are concentrated around Appletree Point, Rock Point and the South End, with a scattering of smaller areas in the Old North End and downtown. Based on that map, Blackwood estimates there are "hundreds of acres" of lease land in Burlington.

As the city's legal team pored over archaic documents, the Jocelyns lost the condo they were going to buy in Essex Junction's Brickyard. The closing date on their current home — April 22 — came and went, and while the buyers agreed to push it back to June 13, that new deadline was fast approaching.

In the end, the city acted — just in time. After a detailed presentation from Blackwood on Monday, the council voted unanimously to grant a quitclaim to the Jocelyns for a modest fee of $50. Councilor Joan Shannon, who is a real estate agent in her day job, observed, "It's pretty devastating in the process of a sale to discover something like this in a deed."

In a separate interview earlier that day, Gillies suggested a longer-term solution for lease-land dwellers: a statewide, 21st century policy that would put this quirky, precolonial problem to rest.