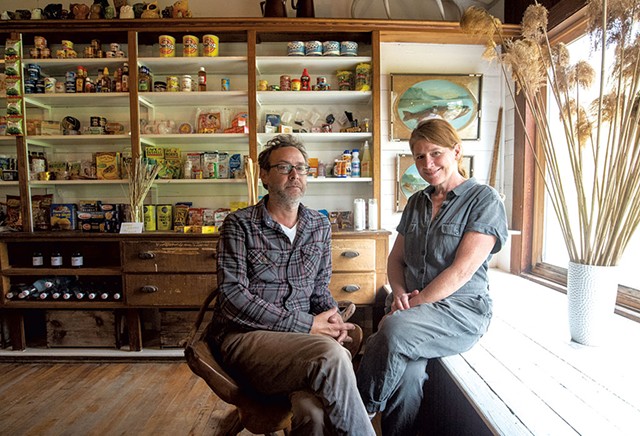 Two weeks ago, Justin Mason took his first trip to Hinterland Market, a new store in South Albany. Mason, 24, is the assistant clerk of his hometown of Albany. He noted and appreciated the array of inventory: housemade pretzels and kimchi, hot sauce and throwback candies, and a spicy flavor of Lay's potato chips — India's Magic Masala — that he'd never eaten before.

"I think it adds a little variety, some uniqueness to Albany," Mason said. "It's nice that they bring a little bit of culture, which I personally feel the town needs."

Karin Weiner and Aaron Malys opened Hinterland Market on South Albany Road in June. The multitalented, artistic couple, who resurrected the village's bygone general store, are creating their own brand of cultural hub, as Mason observed. They've stocked the store with yogurt and eggs from down the road, Vietnamese bánh tráng and pho shipped from Brooklyn, a rack of vintage clothing, and baked goods made on-site. Described on its website as "the bodega in the middle of nowhere," Hinterland Market also houses an exhibit of paintings by South Albany native Eunice Rowell Kinsey.

"I appreciate that this store seems to be mostly an aesthetic project and the creation of a community space." Jim Daniels tweet this

The market occupies a big timber-frame building that was the South Albany store a century ago. The brown clapboard structure on a dirt road dates back to 1917, a few years after a fire burned most of the town to the ground. In those days, the proprietors traveled by sled to Barton in the winter to purchase supplies for the market, and farmers stocked up on grain there. Townspeople gathered at the building for card games, silent movies and dancing to live music.

These days, Weiner, 50, and Malys, 49, are thoughtfully and playfully bringing the erstwhile store to life, after multiple owners and five decades of dormancy.

Weiner grew up in Warren and majored in art at the University of Vermont. She moved to New York City after college, rented a studio and began making art. She went on to exhibit her collages and sculpture around the country as she worked various NYC gigs: serving in restaurants; painting houses; managing a "fake" general store, as she put it; and working as a thrift store picker/buyer.

Malys worked in NYC as an art director, photographer and graphic designer. One of his interests is designing and building skateboards. Though Weiner and Malys lived about a mile apart in Brooklyn for more than 20 years, they never met until five years ago in Vermont, where both had moved.

They were ready to leave New York for a change of scene and, for Weiner, a return to her home state. She was experiencing "a little urban burnout," she said, "and wanting to go back to the country." 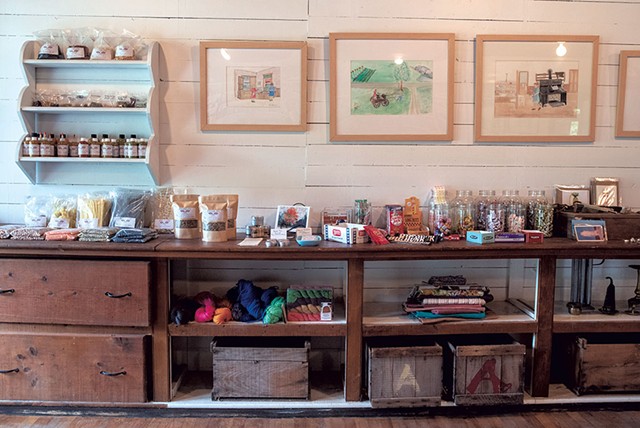 The couple lives primarily in a 19th-century Montpelier carriage house that they gutted and renovated. Four years ago, they purchased the defunct general store in South Albany and started spending summers there. With a pond out back, a garden across the road and apple trees whose limbs droop over a side deck, the property made an appealing seasonal camp.

They kicked around the idea of opening a business and considered an art gallery in South Albany or a skate shop in Montpelier. Plans for Hinterland Market germinated last winter, when the couple thought, "Maybe [the space] deserves to be a store again," Weiner said.

At home in Montpelier, Weiner practiced baking and taught herself to make what she calls "authentic pretzels." In February, she posted a notice on Front Porch Forum, offering pretzels to the neighborhood. The first weekend, she got orders for 14 dozen. Malys added kimchi and hot sauce to the homemade goods, and soon they had a mini food business with weekly pickups on their front porch.

"It kept us busy and not depressed during the pandemic," Weiner said.

Those efforts were the springboard for opening Hinterland Market in June. (By coincidence, another store opened in Albany that month, the community-supported Genny: Albany General Store on Route 14.)

Hinterland Market stocks Weiner's pretzels and Malys' ferments. Weiner also bakes bread and makes meat pies. The savory pastries are stuffed with meat from Sweet Rowen Farmstead in East Albany; their shells are a vibrant yellow, colored by turmeric that Weiner adds to the dough.

Market items include pantry staples and global foods, such as panko, borscht and chin-su sauce. There are baked beans, sardines, ranch dressing and toothpaste. The store also offers a selection of nonfood items, including yarn, hummingbird feeders, toys, colored pencils and bear fat salve made at Cate Hill Orchard in Greensboro.

"We have fun finding eclectic things to mix in with the general store merchandise," Weiner said. "And we would love to have a bigger variety of stuff."

Neighbors appreciate what Hinterland Market brings to the area. On a recent Saturday, Jim Daniels and his 11-year-old son, Fred, ate meat pies and Necco Wafers on the front porch. Fred said he likes having a store that's less than a 10-minute drive from his house in East Albany. Daniels, a carpenter, said he's pleased by the nature of the endeavor.

"It always amazes me that every town [in Vermont] has a pizza store and a creemee shop," he said. "I've always found that indulgent and excessive. I appreciate that this store seems to be mostly an aesthetic project and the creation of a community space."

Recently, Weiner and Malys cleared space to make room for Hinterland Market's first art exhibit: Kinsey's watercolors. They hung 14, painted her signature on the wall and hosted a wine-free opening, per the artist's request.

"She was like a princess in the corner," Weiner said of Kinsey at the opening. 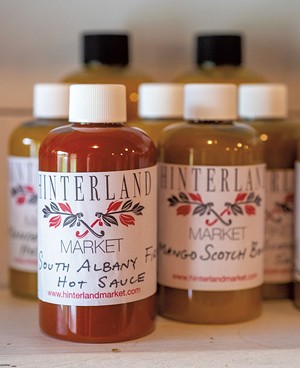 Kinsey, who will turn 94 on October 24, resides a few miles from the market on the Craftsbury farm where she's lived since 1949. From her front porch, she can see across the fields to a maple tree that stands at the intersection of Craftsbury, Glover and Greensboro — towns her ancestors helped settle.

The exhibit features a selection of Kinsey's illustrations from The Rowell Girls: Two Generations of a Vermont Farm Family, the 2003 book she wrote with her older sister, Louise Rowell Kinsey. (Louise and Eunice share a birthday; Louise will turn 95 this month.)

Created at the request of their daughters, the book tells stories from Louise and Eunice's childhood on the family farm in South Albany. At that time, the farm overlooked what is now Hinterland Market.

Eunice Kinsey first learned that the old South Albany store had been brought back to life from her son Earl, 67. He's done some "tinkering" on the building, he said, including jacking it up and rebuilding the foundation.

Kinsey's paintings have been exhibited previously, including at the Vermont Folklife Center in Middlebury and Catamount Arts in St. Johnsbury. When she told Weiner she had 14 of her 44 watercolors left, they arranged to mount a show at Hinterland.

"I hadn't planned anything, except to reveal that I didn't know what to do with the paintings," Kinsey said. "At my age, I'm thinking about emptying the house."

Six of the paintings had sold as of September 30; the remaining watercolors, all for sale, will hang at Hinterland Market until it closes for the season at the end of October. Through the winter, Weiner and Malys will fill online orders and sell their pretzels at Uncommon Market in Montpelier, the Roots Farm Market in Middlesex and the Plainfield Co-op.

Earl Kinsey recalled showing up at the market when it opened with a question for the owners. "I'm new around here," he joked. "Where the hell is Hinterland?"

People are finding out.