The most determined hiker might take years — even decades — to climb the highest 46 peaks in the Adirondacks, the lowest of which measures 3,820 feet.

Adam Valastro aims to do it in less than four days. The Lake George, N.Y., resident wants to set a new speed record when he sets out September 1 on a carefully planned route that involves 58,500 feet of elevation gain — that's nearly twice the height of Mount Everest — through some of the most remote and rugged trails and bushwhacks east of the Mississippi.

"The people that do this enjoy getting up to that limit, seeing if they can surpass it," said Jan Wellford, who set a new fastest known time, or FKT, on becoming a "46er" 11 years ago. In the spirit of succession planning, Wellford is helping Valastro — a challenger — figure out the best way to beat his historic time of three days, 17 hours and 14 minutes.

Peak performance isn't the sole motivation for Valastro's mountain marathon: Last November his wife, Bri, went to the hospital with muscle pain and heart palpitations. She was eventually diagnosed with Lyme disease, a tick-borne affliction that has been spreading steadily northeast. After fighting with doctors and insurance companies about poor follow-up treatment, Valastro wants to raise awareness about what he predicts will soon be a public health crisis.

"I started thinking, What is it that there is around here that I can do that will get attention?" Valastro recalled, acknowledging that only a record-breaking finish would be newsworthy. He announced his intent to an Adirondack hiker Facebook group and shared it within the small but active online Lyme community. His own Facebook page, Quest 46, now has more than 1,300 followers. They receive vetted, credible info from the nonprofit Lyme Action Network, with which Valastro is partnering.

Valastro also shares progress reports on his training, but I got to see it for myself on a Saturday in June. Every weekday since late March, he's hiked the steep trail up Prospect Mountain in Lake George — a mile-long stretch with nearly 1,500 feet of elevation gain. On the day I tagged along, he made it to the top in 32 minutes. By the end of the month, he said his time was down to 23.15. 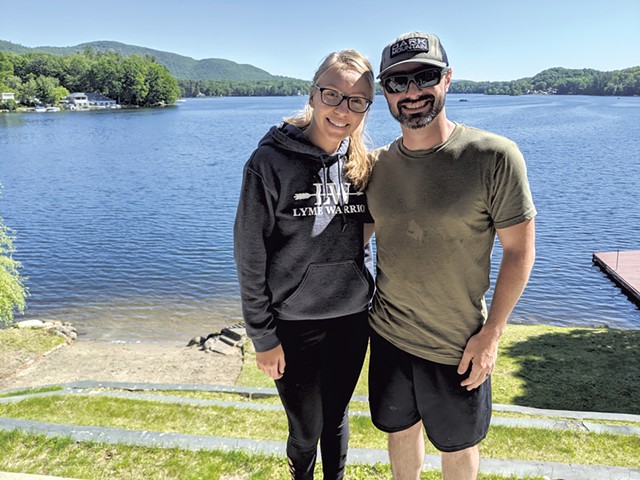 Until last year, it would've been a stretch to call Valastro an athlete. The 35-year-old is a systems administrator at a mental health hospital who spent time in the woods hiking and hunting, but he wasn't a runner and had no experience in endurance sports. Now he's aiming to join an elite club of individuals who push their minds and bodies to the limits.

There are three basic FKT categories. "Unsupported" indicates the athlete carried all the food and gear needed for his or her entire journey, as record-breaking 46ers Mike Jock and Lukas Wear did earlier this month for six days, 23 hours and 45 minutes in the Adirondacks. "Self-supported" allows for resupply caches or stops at a store along the route.

Valastro's approach, described as "supported," allows for a team that provides food, drinks and encouragement to the contender. Friends and family will drive Valastro between trailheads, feed him and run with him to help keep up the pace. He plans to rest four hours out of every 24.

With the "supported" approach, logistics are key. Alyssa Godesky, a 34-year-old professional triathlete from Virginia, learned that when she set a new female FKT on the Long Trail last summer. Unlike the ultramarathons and triathlons she'd been doing for years, the Long Trail had no aid stations stocked with food, water and a medic.

To plan the trek, she and her boyfriend took out a Long Trail map and, using pieces from the board game Life, played out the whole thing in miniature.

"You have to just think through what cars will every single member of your crew be in, how will they get from point A to point B," she said. "We literally had to visualize it."

Godesky had "pacers" with her — a rotating cast of runners who accompanied her over 273 mountainous miles in five days, two hours and 37 minutes. On their fresh legs, they ran at the pace she needed to stay on schedule. "The real challenge is getting as close as possible to perfection while also being flexible," Godesky said. It poured rain the first day. Descending Camel's Hump, she got hammered by storms.

"I started thinking, What is it that there is around here that I can do that will get attention?" Adam Valastro tweet this

Distance running has been part of the human experience since ancient tribes chased their prey until it collapsed from exhaustion. Speed records on pedestrian routes are a more recent development. That's largely because people didn't have the time, resources or desire to seek out arbitrary challenges that required months or years of training, in which suffering is guaranteed and success is less likely than injury.

Wellford said setting records on foot requires "the ability to push beyond the walls that your body is trying to set or your mind is trying to set ... You learn a lot about yourself, and there's a great feeling that comes with that."

Success in most athletic endeavors — especially those with a timer involved — usually means doing what it takes to stay on top of the leaderboard and gain an edge over challengers. But to Wellford, that's not what FKTs are about. The informal rule is: Anyone going for a new record should let the existing record holder know, and it's common for veterans to help the next generation along.

"Every FKT suitor stands on the shoulders of the person before them," Wellford said, crediting Ted "Cave Dog" Keiser for setting the 2002 record he broke six years later. "Basically, it's meant to be broken, as far as I'm concerned, and the next person always has an advantage."

Applying that logic, Wellford has proposed a route for Valastro based on what he learned in 2008 — and he shares it with anyone who asks. His only request: "I'd like to see it done in better style."

Wellford didn't stay on public land for his entire route and shaved off some time by moving the finish line — adjustments that bother him now.

The previous record holder, Cave Dog, finished at the summit of Whiteface, which has an access road that allowed supporters to greet him. But the hike up Whiteface is relatively short, and Wellford figured out that by finishing on a more remote peak, the long descent from that final summit would be off the clock.

"By ending on Dix, which is 6.8 miles from a trailhead, I kind of saved a few miles there," Wellford said. "So that's kind of lame, in my opinion."

While finding route improvements and other tactical advantages are part of setting an FKT, there are unspoken ethical guidelines: walking every foot of trail instead of cutting through a switchback; following all regulations for wilderness travel in the region; actually touching the summit marker; disposing of waste properly; hiking on trails instead of up access roads. In other words, cutting the fewest possible corners — both literally and figuratively — in order to accomplish the goal.

"Say you were doing an overnight, and you didn't carry a bear canister. Everyone else has to use that rule. Like, why are you more special because you're a record attempter?" Wellford asked.

He said he wants to see his record broken by someone who only travels on public land and ends at the final trailhead instead of the last summit.

Can Valastro go the distance on Wellford's new, improved route? In less than a year, he has gone from running an underwhelming 12-minute mile to nearly setting an FKT on a different set of mountains in the Lake Placid region.

In May, he ran the Lake Placid 9'er Ultra — a 32-mile slog up and down a smaller set of mountains that involved roughly 10,000 feet in elevation change. Valastro completed it in less than 14 hours. He might have set a new race record if not for a wrong turn while driving between mountains.

Thirty pounds lighter and sporting the lean, toned legs of a hiker, Valastro looks like a young man in his athletic prime, except for streaks of gray in his goatee.

Bri said her husband's physical transformation has been "amazing." She said the daily training has also forced him to get more organized about scheduling his days, which she likes. "I know where he's going to be," she said.

She's worried about Valastro's ambitious plan — "even with safety precautions, it's dangerous" — but she believes he's doing it for the right reason.

"All these people have Lyme disease, and ... nothing's really being done about it," Bri said. "When he told me he wanted to be kind of a voice for these people and for me — I'm a shy person, I'm not a social media person, I don't really like to talk to people I don't really know ... Adam's always been the person ... to take that stance."

"Yeah, I'm nervous," she continued. "On the other hand, you don't really know what you could accomplish until you try."

The original print version of this article was headlined "A Very Brisk Walk in the Park | Hiker aims to break 46er speed record of three days, 17 hours and 14 minutes"