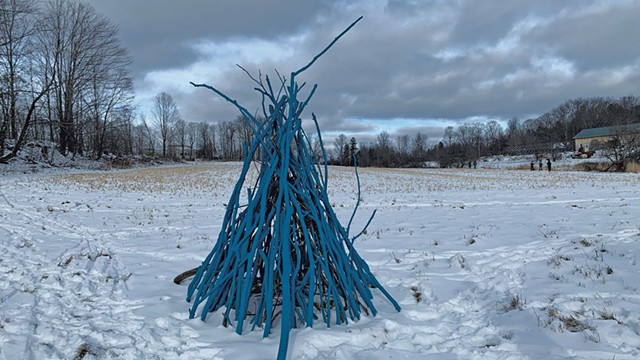 Weekend visitors to the Highland Center for the Arts in Greensboro will likely encounter a friendly face at the café window taking food orders: that of Keisha Luce, the center's executive director. Luce also cocurated the current outdoor exhibition, called the Open Air Gallery Ski & Snowshoe Trail, with Greensboro artist Maya McCoy. "She does everything," one employee said of Luce during a recent visit.

The Open Air Gallery is a pandemic-escape experience not to be missed. Visitors can walk, snowshoe or cross-country ski a 1.8-mile trail through the grounds and adjacent Wilson Farm fields, stopping to look at 17 works of art by 11 Vermont artists. The trail is open dawn to dusk every day. But on Saturdays and Sundays through March, the excursion can begin or end with the café's homemade hot chocolate, spiked coffee and creative grilled-cheese sandwiches — featuring nearby Jasper Hill Farm cheeses and root vegetables from Pete's Greens in Craftsbury. Seating consists of tree-trunk stools placed around several socially distanced warming fires.

Luce, the former head of an arts and historic preservation nonprofit in New Hampshire for nine years, began as HCA director in mid-January 2020, two months before the pandemic arrived in Vermont. An ardent cross-country skier, she hit on the idea of a ski trail after the success of HCA's outdoor show in September, "Wonderland" — an Alice-themed walking trail intended to evoke the topsy-turvy nature of both Lewis Carroll's fictional world and the real pandemic one.

During a phone call, Luce elaborated, "Greensboro typically has a lot of snow, so we thought, Why not capitalize on what we have?"

The trail will be groomed throughout the season with a machine Luce and the board constructed after watching several YouTube videos; a neighbor pulls the contraption behind his snowmobile. In a fun touch, single cross-country skis stuck into the ground at intervals act as trail blazes.

The trail picks up in front of the café terrace, at Phil Thorne's "Fourth Confluence."Visitors to Lemon Fair Sculpture Park in Shoreham, home of the fifth and sixth works in Thorne's series, might recognize the Norwich sculptor's slightly bowed sheets of brushed aluminum. This edition is shaped into an open pod that partly encloses a reflective ball.

The bright color and movement of Judith Wrend's "Cloud Hands," and her "Say Something Nice" farther along the trail, provide a welcome contrast with the gray-white landscape and sky. The rotating tops of these kinetic works draw something of their shapes and red color from Alexander Calder's mobiles, while the Morrisville sculptor's distinctive bases have a presence of their own. The female curves of "Say Something Nice," for instance, give its title a droll ring.

"There are so many wonderful artists who do outside work in Vermont." Keisha Luce tweet this

Peter Schumann and his Bread and Puppet Theater in nearby Glover contributed three groups of works. Luce said that longtime puppeteer Alexis Smith offered "a ton of pieces" when she heard of the planned exhibit — a response that convinced Luce and McCoy an outdoor show was feasible.

"There are so many wonderful artists who do outside work in Vermont," Luce said.

Schumann's series of small, painted, bas-relief concrete panels mounted on rebar, called "Lamentation Road," appear like gnomic signposts along one curve of the trail. His 10-by-10-foot "Handout Series" alongside the art center features giant hands cupping the Earth, clasping in the sky or sprouting trees from their fingertips.

More hands appear in the trail's final installation, "Domestic Resurrection Services," a series of four block-printed banners made from bedsheets. These are stretched between trees at intervals along the edge of the woods.

The HCA Scene Shop — an art collaborative that includes Luce, Maya and Brent McCoy, HCA board member Willy MacNeil, and HCA staffers Meghan Rublee and Ted Donlon — created several works for the Open Air Gallery. One rearranges the center's "Wonderland Wickets" — the previous exhibit's giant croquet arches made from pipes painted yellow or red — into a Christo-like series of gates that one can ski through. Another installation encouraging procession is Brian Gluck's "Cedar Arch," a graceful bent-branch arch erected specifically for this show.

Blakeslee's own "#182" nestles like a treasure in the crook of a tree not far away: a giant white egg contained in a thick, bead-lined shell. But the snow can obscure it altogether. 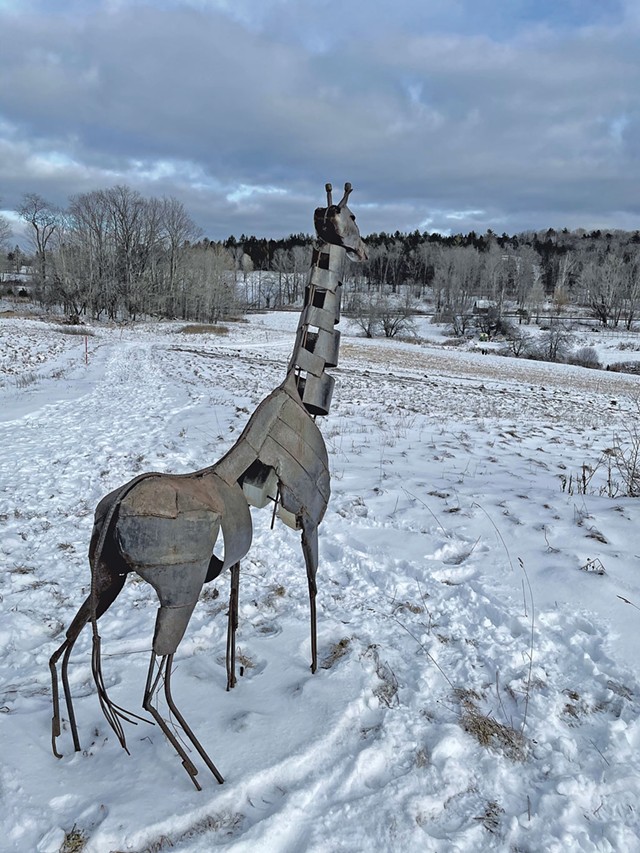 Johnson artist Harlan Mack has sited three of his earlier works along the trail. "Bear Suit," crafted from bike parts, won the 2016 Upcycle Art Bike Competition grand prize from Catamount Arts and Kingdom Trails. The other two, "Giraffe" and "Granilla," are among the first sculptures Mack made, in 2006. Welded scrap-metal creations, they appear remarkably animated; the latter, a gorilla, reaches out a friendly hand from his perch on a preexisting fieldstone.

Rusted metal parts come together in a graceful abstraction, titled "Celestial," by Underhill sculptor Gerald K. Stoner. His Jericho neighbor, Thomas Douglas, used stainless steel for "Aloft," an evocation of industrial machinery and speed in the spare form of a paper airplane angled into the sky.

Douglas previously worked as a gallery assistant at the now-closed West Branch Gallery & Sculpture Park in Stowe, co-owned by sculptor Christopher Curtis, so that may explain the two artists' affinity for a polished presentation. Curtis, however, foregrounds stone in his two works at the Open Air Gallery. The piece titled "Where Do We Come From? Why Are We Here? Where Are We Going?" — always relevant questions — features a tawny 540-million-year-old slab of quartzite, minimally sculpted, standing atop a cruciform and slightly anthropomorphic, stainless steel pedestal. The work rests on a polished gray granite base. Future and past unite in this sumptuous tripartite form.

Luce wanted to introduce an audio element to the Open Air Gallery, so she commissioned Greensboro musician Roy MacNeil — Willy's son — to compose a piece for it. His evocative soundscape using instrumental, electronic and found sound can be heard on HCA's website and even played on one's phone while traveling the trail.

Back at the warming fires during my family's visit, Willy MacNeil was delivering a truckload of firewood onto the property. He subsequently allowed my 14-year-old son to take charge of replenishing our bonfire, a gift that more than made up for the onus of viewing sculpture with his parents.

Both activities were consistent with Luce's comment about the Open Air Gallery's overall goal: "I've been reading a lot about that Danish idea of embracing winter," she said, "and thought, Well, we might as well embrace it."