Highh Def, 'Darren to Be Different' 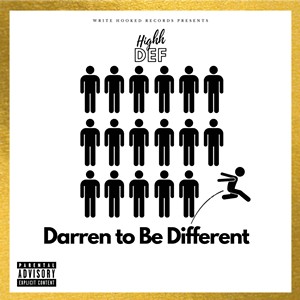 South Hero native Darren Gardner, who performs as Highh Def, made a name for himself in the local hip-hop scene with his 2019 single "Floetic." It was a knockout slice of country rap with real heart and soul, showcasing his tightly written bars and warm, confident singing.

His debut album, Darren to Be Different, is both impressive and surprising. The country rap influence is still there, but there's an equally strong dose of Jason Mraz-style folk-pop. It is a musical journal of sorts, recorded at home as he bounced between Boston and Baltimore.

Album opener "Distortion" sets the tone: Highh Def is equally comfortable singing and rapping, but he blends the two to great effect. He is, first and foremost, a songwriter with a lot to say. The pop sheen is downright deceptive. Beneath the breezy beats and carefree melodies, the song takes a brutally honest look at the cycles of generational addiction.

Hard-won sobriety comes up again on "Cut Different," a party song about being alienated from party culture. Even with his smooth delivery, it's impossible to miss the rapper's tightly packed bars. Highh Def makes intricate rhyme schemes sound natural and effortless — exactly like a true MC should.

There are some stylistic curveballs in the mix, such as "on the low." The cut brings a half-reggae, half-Gorillaz feel and one of the best choruses on an LP full of earworms.

"Kimberly" is basically a ballad, stripped down to a guitar progression straight from Jack Johnson's campfire. This could be a face-plant for a less dynamic artist, but here it's a standout.

The song also makes a stark contrast to the next cut, "b.all.in," one of the best joints on the whole project. It's one of the fullest arrangements, too, packing a serious punch on the low end. The production touches here are smart and effective. This is radio-ready stuff.

Darren to Be Different is a strong debut, but there's always room for improvement. The sound quality throughout is superbly polished, thanks to engineer Chris Ellis. However, many of the tracks are heavy on the midrange — all guitars and vocals. And while the album is cohesive, the tone is perhaps too consistent. Many tracks sound too similar to each other; many of the hooks crowd into the same keys and melodies.

These are small quibbles, though, especially in the face of Highh Def's sheer talent. The album is a statement marking the arrival of a strong new voice. Clearly the result of much experimentation and soul searching, it's an inspiring testament from a survivor disguised as a collection of relaxing summer jams.

While rap purists might balk at his unabashedly pop aesthetics, Highh Def is making some outstanding hip-hop. His bars are on point, but, most importantly, he's speaking from the heart, being himself instead of imitating his influences. Darren to Be Different is a welcome addition to a thriving local scene that's never been more vibrant.

Darren to Be Different by Highh Def is available on Spotify and Apple Music.