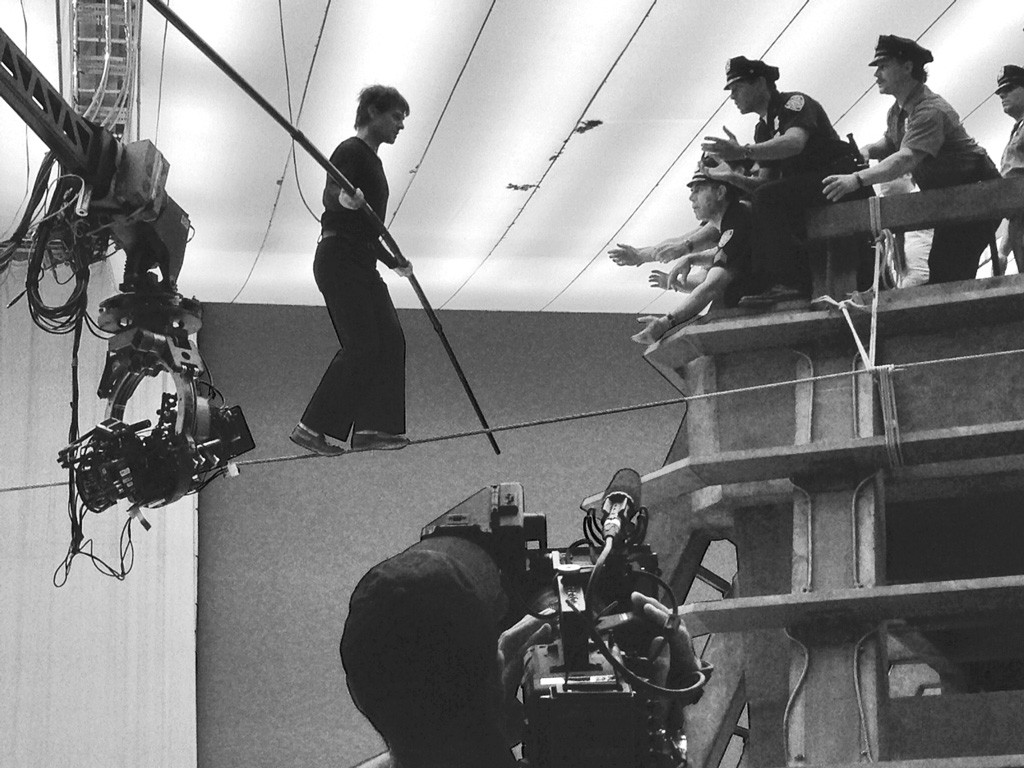 On a spring day in 1997, Jade Kindar-Martin went for a stroll across Burlington's Main Street. Not on Main Street — above it. Kindar-Martin is a high-wire walker, and his rooftop-level perambulation took him back and forth between the Nectar's and Chittenden Superior Court buildings. His daring, without-a-net walk took place in a smaller city and at a lower elevation than that of his idol, Philippe Petit: In 1974, Petit walked a tightrope strung between the two towers of the World Trade Center.

Nearly 20 years later, Kindar-Martin, now 41, found himself walking in Petit's footsteps, as it were. In The Walk, Robert Zemeckis' new film about Petit's legendary feat, the Vermont-born wire walker appears as the stunt double for star Joseph Gordon-Levitt. As Gordon-Levitt as Petit, Kindar-Martin retraces that legendary feat, which was also the subject of the 2008 documentary Man on Wire.

Two days after seeing The Walk for the first time, Kindar-Martin, who lives most of the year near Nîmes, France, sat down with Seven Days to discuss his experience on the set of a film that's already being mentioned as an Oscar contender.

SEVEN DAYS: How did you get interested in high wire?

JADE KINDAR-MARTIN: The very first reason why I'm a high-wire walker is [Circus Smirkus founder] Rob Mermin. He opened up a whole new world. My first year at Circus Smirkus, when I was 14, I learned a little bit of wire, and I was immediately pulled in. It came pretty easy to me. When I graduated from [Champlain Valley Union] high school, I was accepted at both the Tisch School of the Arts at New York University and at a small circus school in Montréal, the École Nationale des Arts de Cirque. The message I got one night was that you can be an actor whenever you want, but you're 18, and you can only learn high wire now.

SD: You're a wire walker, not a stunt man. How'd you land the gig on The Walk?

JK-M: I have an amazing life. [Laughs.] Ten years ago, my wife decided to leave Cirque du Soleil — she's an acrobat — because she wanted to become a stunt woman. Within a week or two, she got her first job: with Bob Zemeckis, making The Polar Express. (When I see Polar Express, I'll see a girl sitting on a bench swinging her legs, and I'll say, "That's Karine!") She became friends with the producer, Steve Starkey. Ten years later, he calls her up and says, "I remember that your husband is a high-wire walker. We're doing this movie — would he be willing to come and teach Joe how to walk on the wire?" Karine asked who was the stunt man for Joe, and I IMDb'd Joe, and we're the exact same height, the exact same build...

SD: I gather that Philippe Petit was an inspiration for you.

JK-M: When I was 14, my mom bought this book for me: Philippe Petit's On the High Wire. And I absorbed this book. I slept with it by my bed. He has a list of all the different tricks he'd seen, and I kept ticking off the ones I could do. Philippe Petit is really my inspiration to become a high-wire walker. So on the first day of filming, I was in Philippe Petit's black jeans, black turtleneck and top hat, riding a unicycle down the streets of Paris. It was bizarre, because I'd read about it, I'd seen those pictures, I'd searched out how he tied his rope.

When I got out of Circus Smirkus, I found a high-wire teacher in France: Rudy Omankowski Jr. This man was an eighth-generation high-wire walker. We clicked. His father, "Papa Rudy," in The Walk is the character played by Ben Kingsley. That's my teacher's father. So I'm in the "line" of Philippe Petit in that sense.

SD: Why would a movie like this even need the services of a real high-wire walker? Why not just have Joseph Gordon-Levitt walk along a beam and digitally drop him into a scene?

JK-M: That is what happened for some shots. Something I suggested was to make a plank and set the wire in the middle of it, so he could feel it. Otherwise, his feet would go all over the place. So, a lot of times [in the film], it's him on the plank.

Part of the reason that I came was that it wasn't just wire that I did. I did all the juggling, all the unicycle work and all the slack-rope work. Also, Bob wanted it to look as real as possible. In the trailer, you see the feet of a character walking out [on a rope], and that's me. If you watch the movements, they're different from those of someone who had never done high wire. Unconsciously, we know. We see things, and they make us believe or not. Little movements that we don't even know about. I think [Zemeckis] wanted it to be as real as possible, since he knew that everything around it was going to be digital. Adding some kind of flesh and blood to the mix.

SD: What kind of instruction did you offer to Joseph Gordon-Levitt?

JK-M: The nature of my instruction was as much mental as it was physical. Being a high-wire walker is 90 percent mental. You really have to know that you're going to get to the other side, to know that you're not going to fall. It's an attitude. If you're scared, then immediately your shoulders start coming in, you round your back, you start closing in to protect yourself. You have to conquer that fear: Open your chest up, throw your shoulders back, head up. I would constantly talk to him about that.

SD: You did stunts in the movie, but you were also a consultant, right?

JK-M: Yes, I was consulting on everything from the diameter of the wire and how it should be rigged to what lighter Papa Rudy should have — the gold one or the silver one? I was the only one other than Philippe Petit who knew that he had a gold lighter. At one point, I got called into Bob's office, and Bob, Steve and the stunt coordinator all look at me, and I'm like, Uh-oh, what's going on? They said, "We've decided that you need a stunt double." I said, "I am the stunt double!" They said, "No, you do juggling, slack rope, unicycle, high wire. If you get hurt doing a trip-over-the-box stunt, then the whole last month, which is the walk between the Twin Towers, will have to be scrapped." So the stunt man had a stunt man.

SD: You just saw the film for the first time. What did you think?

JK-M: We saw it in 3D, and I'm always a little skeptical of 3D. But in this movie, it works. At one point, [Petit] falls and the balancing pole comes straight out, and everybody went like this [ducks]. With IMAX, you're going to be transported straight into the backs of his eyes.

I was really happy that it was Bob Zemeckis who made this movie. The attention to detail that he has, and the way he twists the camera angles, is like no one else. I got chills seeing the movie.

SD: How does The Walk add to what filmgoers already know from Man on Wire?

JK-M: I think they're complementary. When we see the documentary, we get this kind of outsider's perspective. Whereas with this movie, we are literally behind Philippe's eyes. We follow his evolution as a wire walker, and as a person.

The Walk is now in limited release. It will expand to Vermont theaters on Friday, October 9.

The original print version of this article was headlined "Vermont Man on Wire: Jade Kindar-Martin Talks About Filming The Walk"