High Mom: The son of a local aviatrix also arises 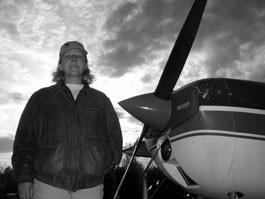 Mom has a loving way of opening up the engine of her plane — a brief, nondescript but vital task. She flips back the flap in the cowl near the nose and peeks inside, shaking her head at the black grit that has started to encrust the pistons. Someday soon she will have to clean them, as even a surface layer of grime can deteriorate the delicate parts. She checks the gas in the wings for the single droplet of water that could be fatal and surveys the windswept runway, watchful for dangerous spots of brake fluid. In the precise world of avionics, a lone impediment can keep a pilot grounded. And Mom can’t stand to stay on the ground.

Every few days, my mother, Gail Isenberg, takes an N6155 Foxtrot cruising across the Champlain Valley. She bought the small, two-seater, 1974 prop plane last year in a timely business deal and, after fewer than three full years of flight school, she can pilot it on her own.

Today I’m flying with my mother for the first time without an instructor. I watch, feeling a bit useless, as she performs the mysterious pre-flight check. She studies the ailerons and the rudder, talking to herself: “Ailerons are okay. The rudder’s looking good…” Mom is a petite woman wearing a brown leather bomber jacket and a self-knitted scarf. She moves nimbly around the fuselage. At last, after a good 20 minutes of inspecting every inch of her third child, she ushers me into the passenger seat.

Mom squeezes into the cockpit and grasps the yoke — she forbids me from calling it a steering wheel — and we fasten our seatbelts and affix our headsets.

“Clear prop!” she calls into the empty airstrip, and she slams the door. A few moments later the propeller is spinning, then it vanishes into a circular blur as the engine ignites. After a quick exchange with the control tower — coded gibberish to me — we taxi onto the runway, facing the distant mountains. The pale walls of Burlington International stretch out behind us.

“You ready?” she asks, her eyes gleaming.

“All set,” I say, suddenly recalling what many of my friends have said: You get in a plane with your mother? I don’t even trust my parents to drive…

During our previous expeditions, her instructor, Byron Danforth, was always there to grab the wheel, er, yoke in an emergency. Now I’m occupying his former seat, and our lives are held in Mom’s small hands. I hear the voice of the air traffic controller crackle in my ears: “6155 Foxtrot, zero, one, maintain runway heading, clear for takeoff.”

We begin to accelerate. I feel the initial force pressing against my chest — and the 6155 Foxtrot is speeding down the tarmac. My stomach burbles as we climb smoothly into the air. Looking down, I see a black blotch crawling across the receding brown grass — the plane’s shadow. My God, we’re flying! With a flash, I realize my Mom is not only cool, she’s astounding.

It all started with flowers. Mom was buying me a bouquet back in May 1998 — celebrating the conclusion of my first year of college — and the florist cheerfully convinced her to enter a drawing for a free private flight. Amazingly, she won. She had forgotten that Addison County has a small, functional airport, hidden behind a small wood in East Middlebury. Her complimentary flight was piloted by Danforth, a tall, burly man with a sense of humor as slippery as old machine oil.

In the middle of that flight, as Danforth soared over the rich green forest, Mom confessed that she was interested in learning to fly — a fleeting fancy as improbable as any other, perhaps inspir-ed by that year’s bestseller, Inside the Sky, by William Langewiesche.

When he heard this, Byron apparently became excited and coaxed her into handling the yoke. The lesson went smoothly — it’s the takeoffs and landings that daunt new pilots — but when Danforth retook control, he made a swift turn. Mom lost her sense of polarity, watching in dismay as the horizon was knocked diagonally. She threw up everywhere. Unfortunately, Danforth had forgotten to replace the vomit bags that day.

He called a few days later and left a message on the answering machine: “Gail, for obvious reasons, I’m offering you a second flight.”

As chivalrous as the offer was, Mom was reluctant to fly again, and even less convinced that taking lessons was a wise idea. The expenses were significant: renting the plane, hiring an instructor, and even fueling the engine, at $2.80 a gallon for low-lead, would add up quickly. The Foxtrot, a very small aerobatic plane, takes 22.5 gallons of usable fuel, which lasts fewer than six hours. Costs aside, Mom’s time was limited: She had jobs as an adjunct psychology professor and director of psychological services at an institute for the deaf. So she waited until August to take Danforth up on his offer.

This time she guarded her stomach against several more tight turns. Over the course of the flight, she realized flying was what she wanted to do. By the time they landed, Mom had thrown caution to the wind: She decided to take lessons.

Since the days of biplanes, fewer than 5 percent of American pilots have been women. Avionics is a splinter of the vastly male-dominated mechanical arts, and the most celebrated pilots tend to be either in the military or veterans. Amelia Earhart was the most famous woman to break the gender barrier — due in large part to her husband’s influence. She co-founded the Ninety-Nines, an organization for female pilots, so called because it had 99 original members. Since her disappearance, no woman has ever matched Earhart in fame.

Still, the so-called “aviatrix” is far from extinct. Mom doesn’t know any in the area, but she frequently flips through Inter-national Woman Pilot magazine to connect with the small but proud community. Perhaps more important, the men at the airfield have welcomed her from the get-go.

The Middlebury airport is tiny, consisting of a single runway and no control tower. Most of the planes are simple two- and three-seater props, which park in ordered lines outside the main office. The office itself is a simple affair with a lobby, a coffee maker, flight charts, stacks of magazines and a classroom for ground school. In such an intimate area, community comes first: For years men have been gathering here to share stories, gulp coffee and get ready to tinker with engines. According to Mom, they rarely talk about anything other than airplanes.

It was intimidating at first for a 47-year-old female to saunter into such a guy-club environment, smell the fumes and shake oily hands. She remembers feeling entirely out of place — many of the Middlebury mechanics have worked on engines since their teens, and all of them are male. When she expressed her doubts to Danforth, he sent her a curt e-mail ensuring, “You are as welcome as anyone else.”

It’s a testament to the small-plane community that Mom hasn’t confronted antagonism from her peers. “Without exception,” she says, “I’ve been en-couraged from the very beginning.” Hanging out at the hangar has inspired her to explore the guts of the airplane. It’s also changed her Christmas list — from knitting needles and shoes to screwdrivers and a Leatherman Super Tool.

Mom had never really considered buying her own plane until a casual get-together in Septem-ber 2000 with Danforth and airline pilot Bill Schwartz. They were discussing the economics of recreational flying — the price of private lessons was making Mom uneasy.

Schwartz mentioned that he knew of a little plane for sale, a certain 6155 Foxtrot. Danforth remembered it, and suddenly both men were convinced my mother should buy it. For $25,000. At first this seemed outlandish to her — 25 grand is a lot of money even for practicing psychologists. But Danforth and Schwartz enthusiastically pitched it like this: Unlike a car, a plane always appreciates in value, guaranteeing a profit if she ever sold it. To own your plane and pay for space and fuel would eventually be a better deal than renting a plane for every lesson. Plus, once she got her license, she could fly on any clear day and park the Foxtrot in either the Burlington or Middlebury airport.

“I realized it was a good idea,” Mom recalls. “And I turned to them and said, ‘Byron, Bill, just one favor: Can you help me convince my husband?’”

Sitting next to Mom in the Foxtrot, I saw clearly that her life has changed dramatically. For years she has worked as a therapist and tea-cher. She’s fluent in American Sign Language and has a bachelor’s degree in music — your classic liberal Renaissance woman. Until four years ago, flying was as alien to her as lion hunting, and yet now she has a pilot’s license and a plane. Her dog-eared logbook is filled with entries from hundreds of cross-country hours. By September, Mom hopes to become a certified flight instructor and train others professionally — accepting the fact that flying can no longer be a hobby. Teaching is the best way to finance it.

But Mom isn’t thinking about any of these things right now, while we’re sailing over the lush, flat countryside, passing the slim, silver bar of a jet, watching the sun blaze across Lake Champlain. She must devote all her attention to the wind currents, the clouds ahead and, above all, the little dials that keep her flying straight and safely. “I don’t get in a plane and not have a little bit of fear,” she confides. “But the rush is so much greater.”

We head toward the ground, skirting the mountains. As we arc around the Middlebury runway, the branches of pine trees reach up to the Foxtrot’s belly. Mom zeroes in on the runway and the asphalt widens like a mouth. She’s landing now, feeling the familiar jostle of tires hitting pavement. But even before her plane touches the ground, I can tell Mom is calculating how soon she can take off again.