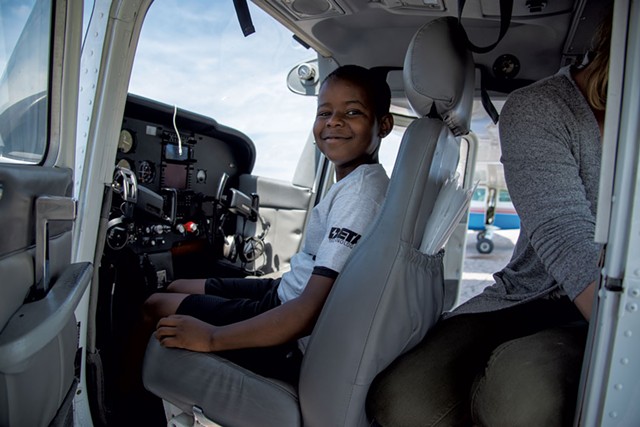 Tyler Brown admits that he "wasn't the most motivated student" as a teen attending South Burlington High School. But something clicked when he started in the aviation program at Burlington Technical Center.

"Being around airplanes changed my life," Brown said. "I went from being a typical student to a straight-A student."

He went on to work at the Vermont Flight Academy, which is based at the Burlington International Airport. Now the academy's executive director, Brown wants to inspire the next generation by giving them an airborne experience. On June 5, the academy and Beta Technologies partnered to officially launch Flight VT, a program that provides free hourlong aerial trips for young people. Beta brought its electric Alia aircraft for attendees to see, and the Vermont Air National Guard brought an F-35.

"It was a frickin' awesome event," Brown said. The best part? "The faces on the kids," he said.

The academy and Beta are working with several youth-oriented nonprofits to find participants. About 15 took flights at the kick-off event, and the program aims to provide 100 total this summer. Each includes a pre- and post-flight briefing, and the journey goes over the kids' hometown so they can see it from the air. Every participant gets a personalized logbook, "which counts towards getting a license," Brown said.

"This isn't a joyride," he said. "They are literally going through flight training, and they're literally the pilot in control of this airplane above the skies."

Brown said there's a perception that flying is "reserved for the ultra-elitists." The program, he said, aims to "make it attainable to everyone."

He acknowledges that not all participants will become pilots.

The kids "can really challenge their preconceived notions of what they're able to do," Brown said. "That's really what this is all about."

The original print version of this article was headlined "Flying High"