High-Class Glass: In Burlington, sales are smoking for designer bongs 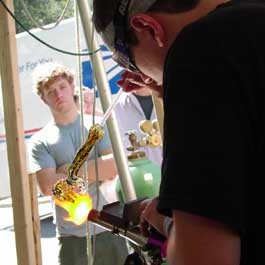 Art and cannibis culture have always been intertwined. In the generation that came of age in the 1970s, this connection was expressed simply: a single marijuana leaf on a jean jacket or T-shirt, “trippy” graphics on rock posters, etc. But bongs were generally of the homemade variety, crafted out of toilet paper rolls or plastic bottles.

Today the bong is an art form unto itself. At a time when the stock market is down and the economy sluggish, some college kids still seem to find a way to afford one of life’s finer pleasures: the $1000 bong. A far cry from a simple pipe, these costly, complex creations combine art and function to deliver a new meaning to the word “high.”

These one-of-a-kind, hand-crafted sculptures may look like something you’d pick up in Venice: colorful depictions of underwater seascapes, uncanny replicas of flowers or cacti or even an abstract modern design. But three strategically located holes are what set these models apart from the ones you see along the Adriatic Coast.

And, of course, they are not supposed to be used for the inhalation of illegal substances.

Bongs are sold legally in Vermont by virtue of legislative changes that took place seven years ago. The law makes it permissible for stores to sell the special smoking tools to adults. In line with the letter of the law, talk about smoking pot from these pipes is taboo, among both glass blowers and store owners. Even vague references are grounds for expulsion from Threads of Zion, Full Tank or Good Times Gallery. Their respective owners — Kellie Alpert, Chris Shaw and Shea Beaumont — also keep minors and foul language out of their Church Street stores.

Officer Jim Muller of the Burlington Police Department confirms that the sale of glass “tobacco” pipes is legal, provided they are sold to persons at least 18 years old, for the ostensible purpose of smoking tobacco.

Alpert has owned Threads of Zion for the last four years and in that time has witnessed a steady increase in the demand for expensive glass. “When I first opened the store there was no market for things over $200,” she says. In 1999 she sold her first pricey piece. Since then, the demand for colorful, detailed merchandise has boomed. Alpert’s shop sells at least one expensive piece a week.

Who are the buyers? Alpert says her customers run the gamut from college kids to professionals and “old-timers” given to impulse buying. “I’ve learned over the years to give everyone that comes in respect. Every day I am knocked off my feet by what people buy,” declares Alpert.

But twentysomethings account for the bulk of Threads’ clientele. Each entering freshman class represents a whole new slew of recruits. Most make a small pipe their first purchase, but many are lured into acquiring the art glass after seeing the paraphernalia of their peers. “They get hooked,” Albert says simply.

Costly bubblers are also an emblem of cool, according to Chris Shaw at Full Tank. “Collections are a status symbol,” he notes. For some, apparently, amassing a stockpile of lavish bongs is the high-end equivalent of collecting baseball cards.

Beaumont, a 10-year veteran of the glass business who recently opened Good Times Gallery on upper Church Street, said he sells $150 pieces on a daily basis, but unloading an extravagant model — say, a $2000 pipe complete with a miniature VW bus encased in a clear orb — is rare. “It takes a special person to buy a $2000 bubbler… someone with a fascination and love for glass,” Beaumont says. “To some it’s no more than a tobacco pipe, to others it’s art.”

Apart from its aesthetic value, glass has become the material of choice for its practicality — it provides a more refined smoking experience. Metal and ceramic degrade over time. Glass doesn’t. According to Beaumont, it’s a cleaner and less toxic way to inhale.

Its initial use for smoking dates back more than a decade, to the times when legendary pipe-maker Bob Snodgrass sold color-changing pipes in the parking lots of Grateful Dead shows. The craft has come a long way since then and now encompasses many colors and styles, including traditional Italian lampworking techniques.

Common pipe types include the classic J-shaped Sherlock, reminiscent of pipes smoked by Sherlock Holmes; the linear-style Hammer, designed with a straight stem and bowl; the Sidecar, a variation on the hammer, with the bowl on the side of the stem; or a classic tube or bong, a cylindrical shaft with a round water reservoir at the base. Some styles, like a bubbler, are specifically designed for filtering the smoke through water; others are made for dry smoking. Sizes can range from a piece that fits in the palm of your hand to sculptures more than a foot high.

Intricate designs are what really set a costly piece apart. Works designed by renowned pipe-maker Bob Badtram feature farmyard scenes, a portrait of a skunk in the woods and a girl petting a deer. Pyrex sculptures of turtles, fish, dolphins and flowers are fused onto some items to add artistic flare. In others, churning ribbons of color are turned inside-out, creating a psychedelic look.

What makes a deluxe bubbler or Sherlock worthy of dropping a grand? “What you’re really paying for is time,” Shaw suggests. Not only the time the artist spent creating the piece but the investment they’ve made in education and training. More beautiful pipes will also fetch higher prices. Add in the cost of materials, equipment and mark-up — up to 100 percent on smaller pieces — and they can put a serious dent in the trust fund.

Feeding — and feeding off — the glass craze are a growing number of producers. Four years ago, local retailers had only two or three glass workers to buy from. Now, between 400 and 500 torch workers from across the country and Canada market their wares in Vermont. “Glass has gotten huge,” Alpert reports. “The number of trained, highly skilled blowers has really grown. From kids with a kiln in the garage to factories pumping out glass… It’s amazing the stuff that is available now.”

Gone are the days of buying glass smokeware out of a black briefcase at a party. Glass has become a multi-million-dollar industry, with countless online stores supplying pipes, bongs and other accessories to anyone old enough to read and use a mouse. Sites sell the gamut of products, from deeply discounted pipes to unique collectors’ items. Online forums allow customers to express their glassy gratitude. Sleuth drug references abound at most of these sites, which also maintain an 18-year-old, tobacco-only policy for legal purposes.

Burlington is home to a limited number of pipe-makers who create elaborate pieces. Armed with an art degree and six years of experience, 27-year-old Washington transplant Joshua Gerry gets more than $2000 per. His focus has never been on small items, but elaborate, foot-high sculptures with surrealist overtones influenced by Salvador Dali and filmmaker Tim Burton. In creating a tribute to Bob Marley, he worked to the tunes of the famous Rastafarian and infused red, gold and green in flag-like designs set against a black background. Solid-glass heads, replete with finely sculpted faces and luminous brains, sleek, deep-hued blooms and claw feet adorn some of Gerry’s smooth, thick pipes.

When he sets out to work, Gerry doesn’t try to make a masterpiece. Rather, he strives to come up with something original. Though he is continually learning new techniques, whether from other artisans, in classes or through practice, Gerry says his interest in pipe-making is waning. Like many others in his field, he wants to move away from functional art and into pure sculpture.

“Pipe-making is not as appealing. I’m not pushing myself,” he admits. “There are people going further and I’m not interested in keeping up. I’m interested in putting more work into the design end, into drawing, things that are more experimental.” Gerry has started making non-functional sculptures, but blowing pipes remains his major source of income.

Mike Fro, 24, recently moved from San Diego to Burlington to learn East Coast artistry and styles. With memories of homelessness not far behind him, he’s still motivated to be the best in his field. “I work harder than anyone I know,” says Fro, who puts in 10- to 12-hour days at the torch six or seven days a week. His artistic influences come from the shapes and colors of graffiti. His pieces are characterized by vibrant reds, blues and yellows swirled in trippy designs against bold black, ribbons of glittering glass accented by a hallucinogenic marble, and orange-tinged flames and octopus-like arms cascading out of a pipe. “I have a general idea before I start a piece,” he says. After that, he blows as he goes to achieve the finished product.

Pipes are continually evolving into more complex art forms as a wealth of new styles, techniques and up-and-coming artists emerges onto the glass-blowing scene. For collectors, this is all good — with or without the smokescreen.

Speaking of Back Issue, cannabis Related