Herding Sheep in Hanover: The Premiere of 'Doggie Hamlet' 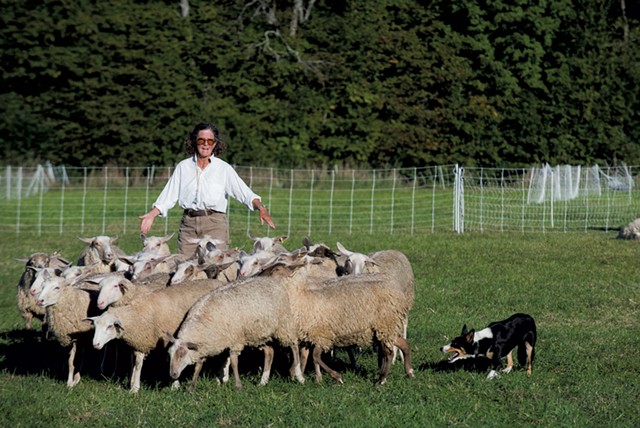 Here's a quiz: What world-premiere performance in Hanover, N.H., this week was inspired by William Shakespeare's Hamlet, Rudyard Kipling's The Jungle Book and David Wroblewski's 2008 novel The Story of Edgar Sawtelle? No clue? Try this: It involves five people, a couple dozen sheep and a few border collies. Hmmm...

OK, the answer is Doggie Hamlet. Presented by Hopkins Center for the Arts, the unique work combines dance, theater and sheepherding, and will be performed twice on Thursday, June 29, on the Dartmouth College campus green. Imagine choreographed swooshes of fluffy white sheep against the verdant backdrop, accompanied by highly trained dogs to keep them from succumbing to stage fright and running willy-nilly. And, yes, there will be a fence. The performances are free and open to the public. (No food or other dogs are allowed.)

The visionary behind Doggie Hamlet is Ann Carlson, a Los Angeles-based, internationally lauded choreographer and performance artist whose work has long included unconventional participants and locations. In fact, notes Hop programming director Margaret Lawrence, Carlson was one of the first people she commissioned when she arrived at Dartmouth some 20 years ago.

"That piece was about, and starred, the custodial staff of the college," Lawrence says. "Ann has an incredible view of people. She's very interested in the ways humans and animals interact."

Carlson has worked with other animals before, Lawrence says, but not sheep.

A different breed would like to see the choreographer's work put out to pasture. As New York Times dance critic Gia Kourlas noted in April, Doggie Hamlet earned Carlson scorn from the flock of conservatives who would dismantle the National Endowment for the Arts. Kourlas references an article on right-wing site the Washington Free Beacon that witheringly sums up Doggie Hamlet as "actors yelling and running at sheep in a field in Vermont." (That commentary, by writer Elizabeth Harrington, was based on a brief promo video for the piece; a preview presentation took place last September in Westminster West.)

For her part, Kourlas defends Carlson the artist, whose work, she declares, "poignantly explores social issues through the lens of performance." In her nonlinear piece, Carlson raises thoughtful questions, Kourlas argues: "What does it mean to follow? What is instinct, and how does that differ from a reaction? What is our relationship to animals and to land?"

Such thematic concerns aside — and regardless of one's opinions on taxpayer funding for the arts — it's hard to see how anyone could resist cute sheep and well-behaved dogs.

The canines in Doggie Hamlet are not, of course, professional dancers. But they are pros at herding; in this case, the trainer is Diane Cox of Andover, N.Y. According to the Hop's description, she issues commands to the collies, which in turn "use movement and an intense gaze (called 'eye') to prompt the sheep to huddle, move as a united group or scatter."

South Strafford sheep farmer Stephen Wetmore, who owns the critters being corralled in Doggie Hamlet, is also a nationally ranked sheepdog trainer who's competed in border collie trials for four decades. This will be his herd's first — and likely last — showcase on the Dartmouth green.

Lawrence says she was thrilled to work with Carlson again again and calls Doggie Hamlet "a mysterious, poetic set of ideas for you to enter." The 70-minute piece is performed in silence (other than random bleats, the galloping of little hooves and the trainer's calls), with no obvious narrative. Lawrence admits she can't predict how audiences will respond.

"It's quite meditative," she says. "I compare it to poetry because, when you read poetry, it opens up your mind to something." In addition to its aesthetic qualities, she notes, the performance brings up philosophical ideas of boundaries and borders — fraught concepts in these times.

"On the other hand," Lawrence continues, "people may just want to bring their families to come and see the sheep. And that's fine, too."

Either way, viewers can take advantage of other activities and events affiliated with the adorable ruminants, ranging from a film called Rams to "sheep to shawl" wool demos to sheep products at the local farmers market. To that point, Lawrence notes that the Doggie Hamlet project evokes the area's agrarian traditions, which once included widespread sheep farming. "Hanover at one time had 12,000 sheep," she points out. "Not until the Industrial Revolution did that change."