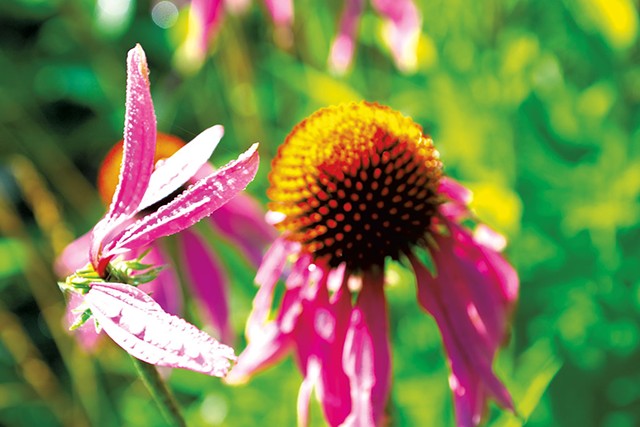 The tincture shot leaves a cool burn in the back of the throat, like the lingering chill of a cough drop. It's bitter but delicate. The emerald-green drops glint as they fall from the stopper.

This is Free Verse Farm's digestive tincture, a concentrated solution of chamomile, peppermint, ginger, fennel, burdock root and dandelion steeped in alcohol — in this case, organic neutral cane spirits. The medicinal tincture is a product of the farm's small herb-growing enterprise off a snaking dirt road in Chelsea. Where the land's original owners once grazed cows, Taylor Katz and Misha Johnson have planted the rolling hills with apothecary purpose. Everything but the ginger is grown here.

The tincture is just one of the couple's creations. Harvested and crafted by hand, their herbs are made into tisanes, medicinals, remedies and body-care products, as well as culinary ingredients. Katz, who is also a poet, and Johnson, a photographer, sell their wares online and in local farmers markets. The Free Verse farmers are part of an expanding community of local herbalists — both growers and educators — who strive to shift the modern disassociation between what one eats and how one feels.

But eating for wellness does not have to entail a $15 "superfood" smoothie or vitamin supplements in rainbow colors. The idea of Western herbalism is much simpler, says Katz: Use the plants that are natural to your environment.

"The spectrum of Western herbalism focuses on what's native to Europe and North America. We focus on growing what's natural to this environment," says Johnson. "There's no reason things like peppermint, chamomile and calendula can't be grown in Vermont." Indeed, chamomile, a daisy-like plant known for its calming and anti-inflammatory effects, grows on the fringes of Free Verse Farm. More commonly, it is bulk-shipped to the United States from places as far as Egypt.

And, like numerous farmers, beer and wine makers, and spirits distillers before them, Katz and Johnson say they "want to give our products that inherent Vermont terroir."

Johnson and Katz met during freshman year at Connecticut College. She studied poetry; he studied environmental science. The two hit it off and together began the learning curve that would eventually result in an herb farm in Chelsea (with a name alluding to Katz's literary passion).

In college, Johnson was particularly interested in ethnobotany — in his words, "the study of how people use and relate to plants across the globe." Work in the college gardens, an internship with a biodynamic farm in Costa Rica and a few years' experience at two organic farms in San Diego gave the couple the foundation for growing and consuming plants.

"But we were curious about what else we could tap into," says Johnson. The pair moved to Norwich, Johnson's hometown, in 2013 and began planting the herbs that had captured his attention in his studies. After two years of planting in backyard garden boxes, the couple found the plot on Baraw Hill Road in Chelsea, a hillside property with 20 acres of uncultivated fields and 20 acres of woodland for foraging.

"We transferred all our plants, built a dehydrator and started seriously growing," Johnson says. By 2015, Free Verse Farm was registered as an LLC.

He and Katz sought further instruction at the Sage Mountain Herbal Education Center in East Barre under Rosemary Gladstar. The Vermont resident is widely considered "the fairy godmother" of modern Western herbalism. Soon after contacting her, Katz and Johnson began collaborating with her daughter and son-in-law, Melanie and Jeff Carpenter, owners for nearly 15 years of Zack Woods Herb Farm in Hyde Park. In May 2015, the Carpenters published the tome on medicinal herb farming, The Organic Medicinal Herb Farmer: The Ultimate Guide to Producing High-Quality Herbs on a Market Scale. With the Carpenters' guidance, the Free Verse farmers expanded their knowledge of Vermont-specific herb growing, which eventually led to a partnership between them for trading supplementary herbs. Benefits of the teamwork were immediately clear: More Vermont herbs meant a larger Vermont apothecary. 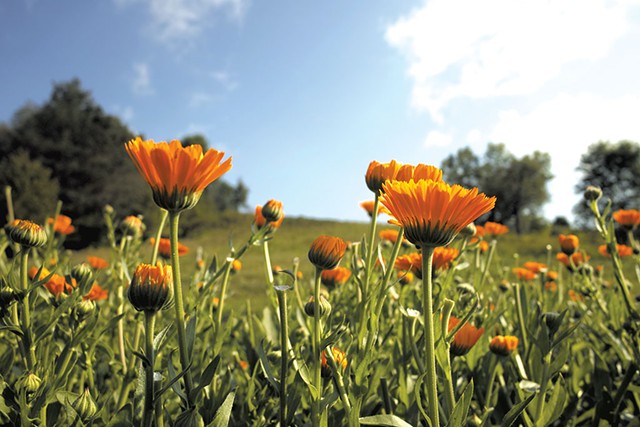 The couple markets their ever-expanding apothecary online via their website, at the Norwich and Chelsea farmers markets, and through an array of specialty stores in Vermont, Boston and New York City. Though Free Verse Farm bears an increasing number of online orders and bulk-herb inquiries from across the U.S, "most of our sales are to Vermonters," says Johnson. Since setting up shop two years ago, the couples' sales — and the contents of their apothecary — both portray a steady climb. 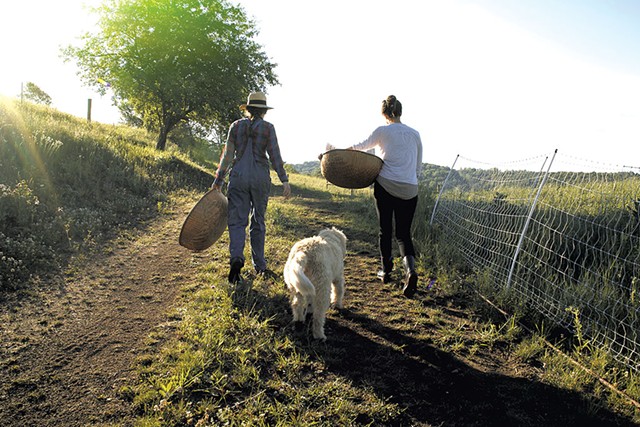 Vermont is nationally known for cheese, beer, maple and dairy — and rightly so — but the same agricultural landscape that fosters the state's artisan culture also acts as a hub for herbal aficionados. Not only is the scope of northern woodland prime fodder for foraging, living in Vermont requires a closeness with the elements that makes the plants themselves more familiar.

"Vermont is among a few areas in the country that seems to have a higher-than-average concentration of herbal enthusiasts," writes Jeff Carpenter in an email. "Plus, our state pretty much epitomizes the 'buy local' movement. Herb growers have the good fortune of being able to market our produce in our own communities."

Even with a relatively short growing season and harsh winters, "many of the most popular types of medicinal herbs used today are native to this bioregion," Carpenter adds.

That statement is key to the practice of herbalism: Unlike the often-pricey chemical concoctions in modern pharmacology, herbal ingredients can be as accessible as one's backyard. Those "weeds" alongside roads might be elderberries, burdock, chicory or mugwort. And, as Johnson, Katz and Carpenter agree, this is especially true in Vermont.

"Herbs are the people's medicine," says Johnson. "They don't require patents or big labs or lots of money to make. They can be available for anybody to use, and they're meant to be used as companions, not crutches."

That's another central feature of herbalism: Herbs are meant as aids, not treatments.

"There are global interpretations of herbal medicine," says Larken Bunce, cofounder of the Vermont Center for Integrative Herbalism in Montpelier, in a phone call. "The crux of Western herbalism is the focus on herbal education. It's about using medicinal plants as food for prevention of, and aid for, different kinds of health care concerns. It's about connecting with a sense of well-being within a larger ecological context."

In a nutshell, what Bunce means is that herbal medicine takes into account the patterns of nature as well as the patterns of physiological processes. If it's freezing and wet outside and your digestion is out of whack, for instance, warming spices such as turmeric and cinnamon can work in your favor.

"But," Bunce adds, "we are careful to emphasize that we're not practicing medicine like someone with years of medical-school training. We do not legally diagnose a disease and offer subsequent treatment. Herbalism is not about treating an illness," she says. "It's about incorporating plants into everyday use to increase our general wellness."

Katz and Johnson agree that the pathways of modern pharmacology and herbal medicine needn't be mutually exclusive — in fact, it's better if they aren't. The scope of medical advancement in the past century is enormous, and useful. Consider that the 1918 influenza pandemic killed more people than did World War I; these days, a preventative shot is available at your local pharmacy. Except among the very vulnerable, the illness is no longer fatal.

"It's unbelievable what modern Western medicine has accomplished in terms of treatment and care," says Bunce. "What [herbalists] add is the notion that no bodily system is immune to things like fear, politics, money or the weather."

The tendency with modern medicine is to seek a quick fix, or to try and overcome the cards biology and genetics have dealt us. "But as human beings," Bunce says, "we're not just a part of nature. We are nature. We can't divorce ourselves from the natural world ... but we can use plants to bring ourselves closer to our bodies in an attempt to understand our complicated physical and emotional selves." 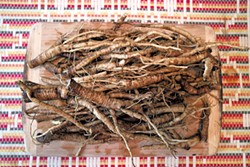 Downing a teaspoon of herbal digestive tincture isn't like taking a sugarcoated tablet of Tums or Pepto-Bismol. And that's the point: An herbal antacid requires being present in the process of consuming it. Free Verse Farm's digestive tincture is strong in flavor, scent and mouthfeel. Its soft burn lingers like menthol — first hot from the cane spirits, then cooling from the peppermint. And it might take more than one dose to begin affecting your gut.

"Herbs aren't always intended for immediate relief," says Katz. "It's gradual. It takes figuring out. You're not just asking for what will erase your symptoms; you're asking yourself what ails you and trying to answer that question by seeing yourself as a natural ecosystem of interconnecting parts."

She offers a hypothetical: You're about to leave on a three-hour drive and you have a wrenching headache, so you take an ibuprofen tablet and feel better in 20 minutes. Great.

"But if you have a headache every morning," Katz continues, "you might ask yourself why, instead of routinely covering up the symptoms." Are you dehydrated? Are you eating enough? Are you unhappy about where you're driving?

Admittedly, she says, thinking about yourself in that way is difficult. It's easier to consider your headache a random bodily event than the side effect of, say, a stressful relationship. But questioning your constitution — how it reacts to cold versus heat, how it responds to crowds or heights — can make a complicated system more familiar.

"Herbalism isn't an attempt to fix existing ailments," says Johnson as Katz steeps lemon verbena leaves in hot water. She pours the brew into a ceramic mug and takes a sip. "It's a way to develop a closeness to the body," he says, "that makes it slightly less mysterious."

The original print version of this article was headlined "Growing Medicine"