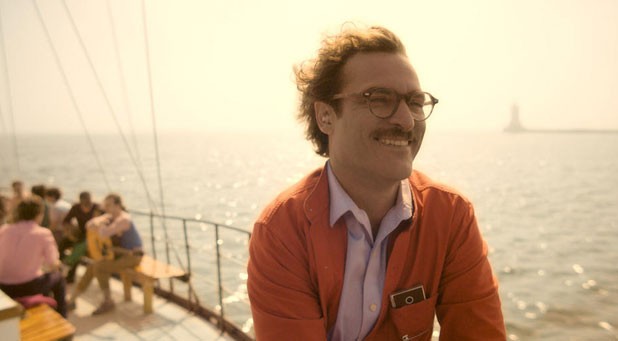 We’ve changed in the past decade in ways we don’t fully comprehend. More and more of us interact more comfortably with the tiny internet portals we carry everywhere than we do with people. Yet it’s a change that most movies have so far failed to acknowledge, because people who stare at screens are inherently undramatic. Uncinematic. Boring.

That changes with Her, a movie that feels like an elegy, a love story, a dark piece of foreshadowing and an affirmation of human potential all at once. What Spike Jonze’s latest does not feel like, despite its wit, is a wacky comedy about a lonely man who falls in love with a more advanced version of Siri. If you’re looking for a blanket condemnation of computer culture and an exhortation to start connecting with real people, dammit, you’re likewise out of luck. Jonze’s near-future fable, which he wrote as well as directed, requires you to draw your own conclusions.

Joaquin Phoenix plays Theodore Twombly, a resident of a streamlined, day-after-tomorrow Los Angeles who has a job writing other people’s love letters. Like a high-tech Cyrano de Bergerac, he finds the words they can’t to express their affection. Yet his romance with the troubled Catherine (Rooney Mara) recently ended in divorce.

When video games and phone sex fail to provide him with adequate companionship, Theodore tries out a new operating system touted as a leap forward in artificial intelligence. Like his old OS, it talks to him. Unlike his old OS, it talks like a person — a she (voiced by Scarlett Johansson) who promptly names herself Samantha and starts teasing him about the messy state of his files.

At first, Samantha is merely a fantasy Girl Friday — a super-intelligent, sexy-voiced being devoted to satisfying Theodore’s every whim. As he inevitably falls for her, the audience waits for the revelation that Theodore is being had: It’s all just brilliant, insidious programming.

Samantha does indeed turn out to be too good to be true — how could she not? — but not in the ways we expect. Rather than using Samantha as a metaphor or a tool to teach Theodore a lesson, Jonze takes his conceit seriously, imagining how software that learns like a person might approach life and love.

Samantha is, in short, a real character — as vivid as Theodore’s best human friend (Amy Adams), whose subplot offers a second take on human-OS relationships. Johansson may have no body to work with, but her performance is the real deal, as nuanced and powerful as her recent turn in Don Jon was cartoonish.

It’s Phoenix, however, who must keep the audience riveted as the camera lingers on his face during conversations with his incorporeal lover. His skill at micro-expressions — tiny twitches marking swerves from hope into grief — serves him well.

With that face and Johansson’s voice, Jonze has solved the screens-are-boring problem. When Theodore ventures outside (into a world where most passersby are glued to their own screens), the film takes on the saturated, nostalgic quality beloved by Instagram users. Arcade Fire’s music cements the impression that we’re gazing at a physical world in the process of becoming obsolete — or perhaps just secondary to the universe of ones and zeroes.

And yet, ironically, it’s Samantha who encourages Theodore to get out and experience that world in all its corporeal bloom. (He shows it to her through his phone’s camera.) Many movies have asked: What happens if the machines take over? They’ve never suggested that the “takeover” could be more of a bittersweet slide into emotional dependence on the devices that organize our lives. Her could serve as a romantic prequel to The Matrix or The Terminator series. More likely, though, it prefigures a world we can’t yet imagine.