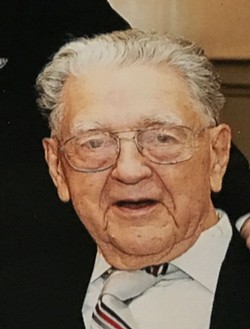 Henry Vernon Atherton passed away at his home March 1, 2016. He was an amazing man, deeply devoted to his family, a WWII veteran, a pioneer in the dairy industry, and a committed volunteer in the community.

He became a professor in the Animal and Dairy Science Husbandry Department at UVM, where he had a distinguished 36-year career as a professor, research investigator, and Dairy Extension Specialist, focusing on special interest areas of dairy and food microbiology and sanitation. He established the popular dairy bar in the newly constructed Carrigan Dairy Building, wrote the widely-used textbook, Chemistry and the Testing of Dairy Products, and mentored many of the current leaders in the dairy industry.

He became a pioneering investigator on the influence of bulk-milk cooling on the quality of milk and dairy products. For that work he was identified as a leading researcher in a 100-year history of the American Dairy Science Association. He was a founding member of the Dairy Practices Council, and president of the Vermont Dairy Industry Association, and served on several national boards in the dairy industry. He worked with the Department of the Interior and the Environmental Protection Agency to establish farm water quality criteria.

He retired in 1989, and received the Sinclair Cup Award for lifetime achievement, and was elected to the Vermont Agricultural Hall of Fame.

Henry was deeply involved in scouting and earned the prestigious Silver Beaver Award, and longtime member of the Kiwanis Club. He was active in his church, and volunteered with the Community On Temporary Shelter (COTS), the Joint Urban Ministries Program (JUMP), Meals On Wheels, The Flynn Theater, and the Firehouse Family Shelter.

Henry was married on August 24, 1947 to Phyllis Marie Hardy, daughter of Wayland and Alice Hardy, in their family home in Dummerston, VT. They celebrated their 68th anniversary this past August.

Visitation will be Friday March 4 from 4:00 p.m. to 7:00 p.m. at LaVigne Funeral Home and Cremation Service, 132 Main St., Winooski, VT 05404. A Funeral Service will be held 11:00 a.m. Saturday March 5 at the First Congregational Church of Burlington 38 South Winooski Ave, Burlington, VT 05401, parking is limited please use the parking garage and street. In lieu of flowers please make donations in Henry's name to COTS (committee on temporary shelter) in Burlington. Condolences may be shared at lavignefuneralhome.com.