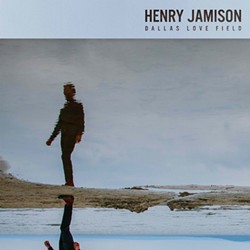 Henry Jamison has been charming local audiences since he was a teenager. His first album, Here's Hoping, released in 2006 under the pseudonym the Milkman's Union, suggested that the then-17-year-old had emerged from the nest as a nearly fully formed bard. Jamison left Vermont for school in Maine, where he built a solid indie-folk rep, and returned to the Green Mountains again. Along the way, his craft evolved from naïve to transcendental. It's no wonder his new EP, The Rains, has been gaining massive international support — it already has more than two million plays on Spotify.

The Rains was recorded a little over a year ago with Ethan West, who has since left the recording arts to farm maple syrup and honey. This may account for the touch of sweetness the EP imparts. Jamison immediately grasps the listener by the hand like a dear friend and pulls them close. He intends a kind of lyrical telepathy, and he certainly does create synesthesia. The EP is an impressionistic collection of small experiences connected by a philosophy that resembles millennial transcendentalism. Love scenes are described with a mature and feminist understanding against a backdrop of New England woodland towns.

Delicate classical arrangements demonstrate a desire to further the evolution of the genre. Jamison deftly fingerpicks intricate folk melodies on guitar. Various string instruments fill the sonic field with accompaniment inspired by synth textures. Drum progressions are energetic and unexpectedly evocative of dance and R&B. Vocal melodies and harmonies allude to choral aspirations. Jamison seems to be one of those characters who is constantly conducting unheard symphonies in his mind. His compositions move with confidence and purpose.

The EP flows in a thoughtful order. Each song has its own distinct qualities, yet they're all framed similarly. "Dallas Love Field" begins the EP with a celebration of romance amid a swell of warm chords. Bursts of bowed string phrases dance across the track, evoking the nervous excitement that bubbles at the sight of a lover. "Real Peach" feels like a contra dance followed by a campfire sing-along.

The title track is a highly visual and metaphorical telling of watching a storm rage from a safe vantage point. Cymbals crash as lighting in a gale of haunting vocal harmonies against a wall of uplifting and jovial guitar. "Through a Glass" begins with a beautiful classical introduction and shifts into a driving ballad with a bit of an alt-country sensibility.

Jamison closes the EP with "No One Told Me." "No one told me the ways of the world, how could they? / They are sundry and immense," he sings. Over a swirl of strings and brushed snare percussion, Jamison spins a story about seeing oneself through the eyes of another. Like his best work, it's a relatable reflection.

The Rains by Henry Jamison is available for purchase through all major online distribution sites, including iTunes, Apple Music, Tidal and Google Play.

Speaking of Henry Jamison, The Rains