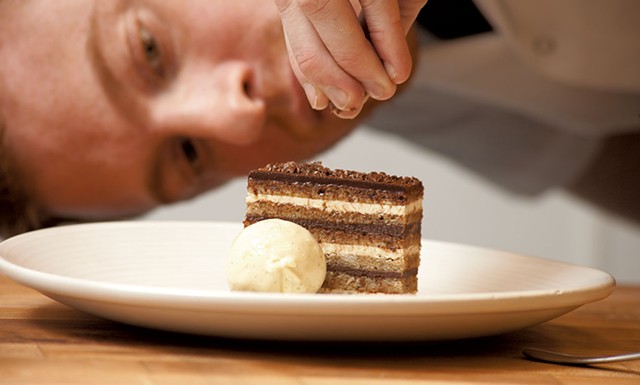 Andrew LeStourgeon, known to many as Little Sweets, left his pastry chef gig at Hen of the Wood on August 1. He flew the coop to begin a hush-hush new project, slated to open at Burlington's 111 St. Paul Street "before Valentine's Day," he says.

Now LeStourgeon can announce his collaboration with Rob Downey, CEO of Third Place and Zero Gravity Craft Brewery, as well as a partner in American Flatbread Burlington Hearth. Their "fine diner," Monarch & the Milkweed, will focus on LeStourgeon's pastry specialties.

But don't call it a bakery. The restaurant will serve breakfast, lunch, dinner and cocktails. "It's not at all fine dining, and it's not a diner, but it's a take on a comfortable sort of food that people want to eat all the time instead of special-occasion stuff," says upscale-kitchen lifer LeStourgeon.

Jeff Baumann, best known as bar manager at Prohibition Pig, will lead the cocktail program. Most importantly, Amanda Wildermuth, who worked alongside LeStourgeon at Hen of the Wood, will step in as pastry chef. "She's got a big job ahead of her. I can't even satisfy myself, so good luck," jokes the chef-owner.

LeStourgeon calls his and Downey's plans "a big business inside a little space." The pair first met when the chef visited the former Guild Fine Meats storefront in April. "I was looking at the space confidentially, and [Downey] presented himself as the landlord," recalls LeStourgeon. It soon became "less of a five-minute walk-through and more of a five-hour meeting."

The pair's goal for Monarch is to conjure the delight of childhood with a scoop shop of ice creams, sorbets, milkshakes and frozen yogurt; and savory dishes including pot pies, quiches, corn dogs and sandwiches in "cute shapes and sizes." Sweet pastries will include new treats as well as classics such as LeStourgeon's cinnamon buns, opera cake and canelés.

Guests at all hours will be able to stop in for meals or snacks paired with java from Brio Coffeeworks. And Monarch won't be the only place to get LeStourgeon's wares — he says he plans on launching a "huge wholesale department." Burlington has never been sweeter.

The original print version of this article was headlined "Sugared Start"