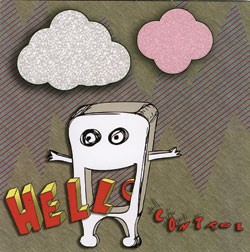 Pop. Punk. Pop-punk. Fans of the former are typically ignorant of the latter, while fans of the latter almost universally despise the former. The hybrid genre pop-punk, likely owes more to Cheap Trick than it does The Sex Pistols. It’s provided the soundtrack for suburban teenage angst — and every teen-comedy flick since American Pie — for more than a decade. As a result, bands such as blink 182, Sum 41 and Good Charlotte have dominated “alternative” rock radio playlists since the mid-1990s. Speaking of which, memo to 99.9 The Buzz: We’ve found your next “Buzz Band.” And they were right under your nose the whole time. Say hello to, um, Hello Control.

With its self-titled debut EP, the Plattsburgh quintet serves up five rock-solid tracks of melodramatic, high-energy guitar fuzzery, any of which would likely fit perfectly between New Found Glory and Simple Plan on your average high schooler’s mixtape — assuming kids still make mixtapes in high school. While the group displays all of the genre’s typical calling cards, to dismiss them as merely another cookie-cutter, radio-friendly knock-off would be a mistake.

The disc kicks off with pop-a-licious opener “Forever,” which nails pretty much every pop-punk convention with aplomb . . . in the first 45 seconds. A synth-and-drum intro gives way to a wall of driving guitars. Almost immediately, signature nasal vocals — snottily delivered, of course — take center stage over muted power chords. Before you know it, the band launches into a halftime breakdown and subsequently hits you with the requisite fist-pumping, anthemic chorus. Folks who require instant gratification will be gratified.

The following track, “Start Over,” is the closest thing to balladry you’ll find on this EP and is certainly lighter-worthy. Like most of the songs here, it’s well written and impeccably played. No individual songwriting or instrumental/vocal credits are listed in the liner notes. But whoever penned these tunes has a knack for succinct pop poetry.

The remainder of the disc showcases Hello Control’s willingness to incorporate less conventional — for the genre, anyway — techniques and sounds into the pop-punk template. In particular, their liberal use of Killers-esque retro New-Wave synth and the rowdy a cappella sing-along break on the EP’s final cut, “Tell the Truth,” are effective and inventive.

All in all, this is a fine debut from a young band with room to grow. Catch them this Monday at Higher Ground’s Showcase Lounge as the band handles opening duties for fellow pop-punkers All Time Low, Just Surrender, Mayday Parade and Every Avenue.