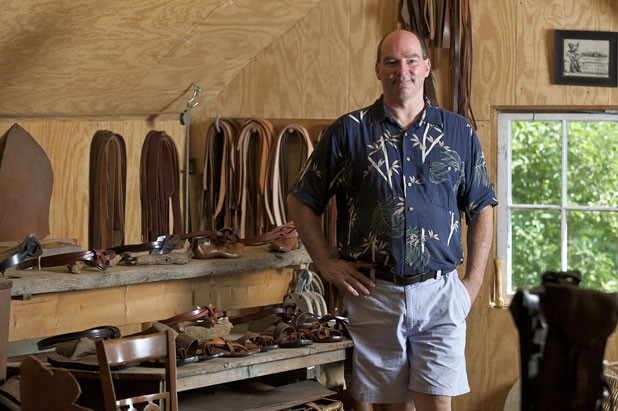 By the time Kim Rilleau was 12 years old, he had already worked with leather for eight years. As a tyke, he sewed and polished cowhide at his parents' shop, Rilleau Leather, in Provincetown, Massachusetts. At 14, he got his own bench and knife. Two years later, he could make custom leather sandals from start to finish. Now he's 58 and just beginning to go public with his talent in Vermont, showing up at the farmers' markets in Woodstock and Norwich with a display of leather goods that might have been swiped from the American Museum of Natural History.

When describing what he does, Rilleau often begins at the beginning: with his father, Roger Rilleau, an immigrant from the Brittany province of France. Roger was an artist, but instead of waiting tables to make ends meet, he put his energy into conjuring what Kim calls "the finest sandal ever made."

Kim's mother, also an artist, refined, finished and presented the sandals, belts and handbags at the shop they ran together starting in the early 1940s. "There was nothing like their designs," Kim says, "and in a lot of ways there still isn't. When you look at some of the things that they've done, it has a wonderful timelessness about it."

Kim Rilleau moved to Woodstock in 1997 and keeps his shop on the second floor of a barn next to his house. A giant set of bull horns hangs on the wall at one end of the loft space as if blessing the operation below, which includes ancient Singer sewing machines, a corner desk littered with antique tacks, and a work bench with a proper collection of leather-working hand tools. On a big table in the center of the room are the dusty record books that look like they were dug out of a town hall vault. Inside them are the foot measurements of every Rilleau Leather customer since 1947.

Rilleau doesn't see patrons from that far back, but it's not uncommon for a 30-year-old pair of sandals to show up at his doorstep for refurbishment. At a price of $275 to $375, the sandals aren't cheap, but what do you expect to pay for custom footwear that lasts longer than most marriages?

Seven Days dropped in on Rilleau at his workshop to learn the secrets of the sandal.

SEVEN DAYS: How did you learn the leather trade?

KIM RILLEAU: Primarily from my dad. Being the first-born son of a sort of a European-tradition family meant that you became an apprentice, and there was a fatherly pride in him being able to show me how to work something and then get some satisfaction out of what I was doing. I remember him showing me how to sweep the floor right. We had a great old oiled wooden floor, and there was a way that you did it - you used the right bristled broom, you dampened the floor so it kept the dust down. It wasn't like, "Sweep the floor." It was like, "This is the way you do this properly."

SD: What did you and your parents sell at the leather shop in Provincetown?

KR: We were really sought out for the custom sandals. My father had the first sandal shop in America. The other thing that's really unique is the sculptured belts. Back in the 1940s, you couldn't buy buckles; the metal was rationed. So, my father being the innovative, free-thinking guy he was, if you told him you couldn't make a belt because you didn't have a buckle, he said, "Wait a minute." So he decided to make a knotted belt. They're all cut free-hand; there's no pattern. They just lace through and you take up the slack. There's two basic designs: the figure eight and the other one's just a simple loop. My parents couldn't keep enough of those in the shop.

SD: Was there a "heyday" of sandal making?

KR: By the 1960s, sandal making was enormously popular. From 1964 to 1967, just in those three years, it went from being relatively unknown to not only being very, very popular, but lots of people started sandal shops. And at all the Meccas - Berkeley, the Village, Cambridge - sandals were part of the emblem. Even more than bellbottoms and sideburns, you needed a pair of leather sandals. Provincetown also was one of the great Meccas of the hip movement. In 1962, there were three sandal makers in Provincetown. In 1968, when we moved the shop out of the center of town down to a studio on the outskirts, there were 27.

SD: What's your definition of a sandal?

KR: I think sandals are generally synonymous with what we would think of as open footwear. But a lot of what we call sandals - Birkenstocks included - are not what I would call a sandal. I look at a Birkenstock and what I see is a ventilated shoe. In other words, it's just as enclosing, practically, as a shoe is, but there are some areas, like around the toes and the instep, where there's been an opening made. The difference with my sandals is that the strapping keeps the sandal and the foot so well matched, that it's like wearing a shadow. And you don't feel it, because you've succeeded in holding the sandal on the foot in places that don't confine the movement.

SD: What's the design theory behind the "ultimate" sandal?

KR: The healthiest thing you can do for your body and feet is to go barefoot and don't wear shoes, under the right conditions, namely in a cooperative climate . . . on a shock-absorbing surface like sod. But we're modernized, and we have artificial surfaces that are unforgiving . . . so we need to make a platform on which to walk that will accentuate a healthy stride and give that cushion to it. The second question is, how do you create these wonderfully conflicting things: something that will be as close to barefoot as possible, and something where the physics of the design does all the work? In other words, so you don't have to hold the sandal on or worry about it becoming loose or sloppy. So, you need to get the maximum amount of security from the footwear and also the maximum amount of freedom, and those two things conflict.

SD: How does the process work when an average client comes to you and says, "Make me a pair of sandals"?

KR: There's three basic questions that you want to answer about what they want. One is the design of the sandal, and by design what I'm talking about is the strapping style. How are the straps that hold the sandal and the foot together comprised; where are they placed? The second thing is the sole construction. Classically, the soles are wet-formed to the classification of the arch, laminated and glued, and then nailed. An option is, do we add a third sole, which usually will be a high-quality rubber like Vibram? And the third would be color - mahogany, tan, medium brown, dark brown. Then they initiate the process of taking the order, which is to do a tracing. So they sit, and I get a couple of pieces of leather, put it on the ground, and then the measurements are taken. And from this two-dimensional rendering it becomes three dimensional, and then we're home.

SD: What kind of leather do you use?

KR: It's cowhide almost exclusively, tanned in different ways. So the top sole is made from a nicely oiled industrial belting leather. The bottom sole is a very high-quality sole that the best shoemakers use. And then the strapping, depending on what we want it to do. So part of my job, which is really important, is to select the right material. I can't tell you how much time I take choosing which piece of leather to use on which sandal - what I call "laying out." How much flex do we want? How much firmness do we want, and how to get that right, so that the sole will give you as much support as you need, as well as the flexibility you need. You're choosing the ingredients and extrapolating how they're going to respond in two years, in four years.