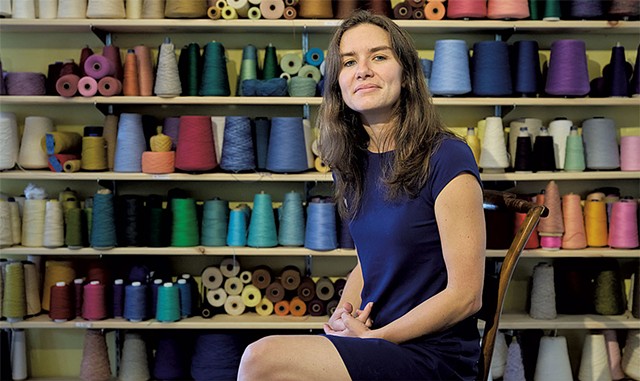 The rhythm of Heather Moore's year has been timed to an academic calendar for more than three decades, from prekindergarten in Rutland through graduate work at the University of Vermont. This fall, she will defend her doctoral thesis in education.

Though Moore's graduate studies are all but done, her schedule is still aligned with the school year: She's the new executive director of Shelburne Craft School. A month into the job, she noted a key difference between that institution and others where she's studied and worked.

"I love learning new things, and I love being around people who are curious," she said. "This place really embodies that. Without the bureaucracy."

Shelburne Craft School has been offering crafts classes in Shelburne since 1945, with hands-on instruction for kids and adults. Moore described it as a school filled with people who want to be there: the teachers, the students — and the new administrator.

"I'm in love with this place," she said. "And when you're in love with something, it doesn't feel like work."

Moore, 36, is a 10th-generation Vermonter from Proctor. After pre-K in Rutland, she attended public school in her hometown through 12th grade. She earned an undergraduate degree in history from Skidmore College in Saratoga Springs, N.Y., and a master's degree in that field from UVM. In nine years spent at Vermont Commons School in South Burlington, she taught history and served as dean of students. Moore furthered her graduate studies at UVM with her doctorate in education, which focuses on gardening for metabolic health.

Now, she's excited to take classes in a different field: oil painting in the fall, followed by weaving.

"Making art is kind of part of my job," she said. "I'm over the moon about that professional development."

Moore hung out in the art room in high school, drawing and painting, and took studio art classes at Skidmore. "I'm a chronic doodler," she said. When she travels, she visits art museums.

In her new position, her longtime side interest in the arts moves front and center. "It's been a heartbeat through my life," she said. "Now it's come into focus."

Visiting museums and making use of their collections featured in Moore's seventh-grade Vermont history class at Vermont Commons School. She started each unit by presenting students with an object from the era they were studying, giving them time to guess what it was before she explained and contextualized the piece.

One of her favorite objects for this purpose was a squirrel cage — hardly an ordinary one — at Shelburne Museum. The handsome, circa-1900 painted piece is equipped with an exercise wheel; the spinning squirrel powers small wooden figures that operate tiny saws.

Moore observed a connection between that object (and others in the collection) and the work of Shelburne Craft School.

"That kind of creativity lives on here," she said. "You can look at it at Shelburne Museum. We're doing it here: creating interesting, new beauty."

In addition to her work in education, Moore helmed a nonprofit as executive director of Camp Thorpe in Goshen, a camp for people with intellectual disabilities. She left that position last spring to focus on writing her dissertation. As that endeavor reached an end, Moore started looking for a new job. She wanted to work at a small nonprofit in Vermont, with a preference for places that brought together a "community of learners."

When Moore, a Shelburne resident, saw the job listing for the craft school, "the arts part [put it] over the top," she said.

She recalled telling her husband, artist Ben Patrick, and her parents that she didn't expect to get an interview. But she had to apply, because the job held enormous appeal. She was hired by the board in early July and started work two weeks later.

Her small office, in a former 1840s bunkhouse for railroad workers, is decorated with a painting by Sage Tucker-Ketcham, a previous executive director.

Sometimes Moore walks through the school and stops in the weaving studio just to look at the colorful spools of yarn stacked on a shelf.

"It's such a magical little spot," she said.

Shelburne Craft School teaches artisan classes and workshops to about 1,000 students a year, providing instruction in weaving, pottery, woodworking, stained glass and painting. Its programs include weekend workshops and a summer camp.

Moore succeeds Claire Gear, an architect who served as director for almost four years. In an email to Seven Days about her new position, Gear wrote: "I absolutely loved my time at the Craft School." She left because "[a]n opportunity came up to work with a local philanthropic family, as their Chief of Staff."

Andrew Everett, president of the board, said Gear "shepherded" the institution well through the pandemic, finding revenue streams when tuition — which typically covers 85 percent of costs — was on the decline.

"We're sad to see her go but happy she left us in a really strong position," he said.

Moore's fundraising ability and nonprofit management experience were clear on her résumé and important to the board, Everett said. But he also cited "the intangibles" — her sense of humor, curiosity, interest in education — as reasons to hire Moore after board members met and talked with her.

"Heather seems to have the ability to connect with anybody, from a 5-, 6- and 7-year-old through an octogenarian," he said.

Everett came to know Shelburne Craft School through his daughter, Tess, a senior at Champlain Valley Union High School in Hinesburg. As a kid, Tess took classes at the school and developed a particular interest in woodworking.

"I fell in love with the place as a quintessential third place for her," he said, apart from home and school. Craft projects teach creative problem solving and resilience, Everett said.

"You have a plan to create something, and at some point something goes wrong," he went on. "You could cry. You could throw your thing down. You could pout." Or you could figure out a way to make it work.

Moore's own daughter, Rosie Patrick, who starts kindergarten this week, will take a clay class at the craft school in the fall. It's a time when making art is of particular value, Moore suggested.

"We just lost a lot during the pandemic," Moore said. "I think something we've gained is an intense desire to be human again. And this place offers a route toward that."

Moore is excited to begin her own art making and pleased that taking classes at the school is part of her job. She said she's got spreadsheet management down.

As for being an artist, Moore said: "I will be soon."