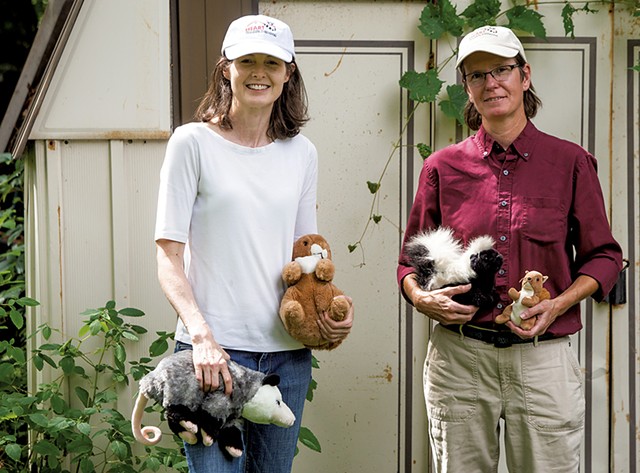 One night a few winters ago, a friend and I were making dinner at home. As I diced veggies for a stir-fry, she reached into the cabinet above the stove to grab a bottle of olive oil. And then she let out a bloodcurdling shriek. Suspended upside down in the bottle was a dead mouse.

What was truly shocking — aside from the bloated floating mouse corpse — was the size of its tomb. Not only had our doomed critter gnawed the cap away and managed to squeeze into the bottle — somehow sullying the extra virgin oil without toppling it — but its entry point was no bigger than a nickel.

As I later learned from JoAnn Nichols of HEART Wildlife Removal, that's a luxurious fit for a mouse. She explained why we've had to deal with our share of mouseguests over the years.

"Mice only need a space about the size of a dime or a BIC pen to get in," said Nichols as she recently surveyed the outside of my South Burlington home looking for, and finding, likely ingress spots. "With wildlife," she added, "if they can fit their head through, they can fit the rest of their body through."

Nichols, 55, is the cofounder and co-owner of HEART, a Burlington-based animal control company that specializes in the humane removal and treatment of unwanted wild animals. (HEART is an acronym for Humane Eviction and Removal Team.) The business is the first in Vermont to be licensed as a humane wildlife removal pest control company.

I had invited Nichols and her business partner, Patty Tashiro, 50, to my rented suburban house to advise us on avoiding another floating mouse incident. I also wanted their take on how to minimize the seemingly growing population of other nuisance animals that have lately taken up residence on the property, especially squirrels and skunks.

Nichols, a licensed wildlife rehabilitator, quickly identified a number of animal access points to the house. The branches of a large maple tree in the backyard might shade the patio, but they also act as bridges to the roof — which is probably how a squirrel was able to reach and then chew through the screen of our kitchen skylight.

"Animals will gain access from trees and wires," Nichols explained, advising us to cut the maple's branches back six to 10 feet from the house. She added that squirrels often climb brick chimneys and Santa Claus their way in from the top. Our chimneys are capped. But rodents are clever and industrious.

"You'd be amazed at all the different ways they can get in," Nichols said. "Squirrels, especially, are really good at finding anywhere that the wood is a little softer and chewing away at it and getting in that way."

She noted the plastic hose from a sump pump in our basement that juts through a wall just above the foundation. The hole in the wall is a decent fit for the hose, but Nichols advised shoring it up with steel wool. Basement window wells along the driveway should be sealed, too, she said. Ditto any part of the house where pipes or wires enter from the outside. Exhaust vents from dryers, bathroom fans or oven hoods should be protected with screens.

Anyone with rudimentary handy skills can manage those sorts of preventive measures without the aid of an expert like Nichols. "I try to do triage on the phone and help people do as much as they can themselves within the bounds of what's safe," said Tashiro, who acts as HEART's dispatcher and business manager. "But if things are more involved or outside their comfort zone, we book for JoAnn to go out."

"Mice only need a space about the size of a dime or a Bic pen to get in." JoAnn Nichols tweet this

The two women met in 2012 when Tashiro, who had recently moved to Burlington from London with her husband and young daughter, discovered a dead baby skunk in her yard that tested positive for rabies. After making calls all over the state seeking someone to de-skunk the yard, Tashiro was referred to Nichols, who then operated another animal control business called Into the Wild.

"I was all worried and nervous because I had this rabies vector die in my backyard," Tashiro recalled. "But she came and talked me through it and took the time to educate me and my husband and my daughter."

By that time, Tashiro had tried other animal controllers, and she was impressed by how much more thorough Nichols' method was: She put up wildlife cameras and checked in every day until the problem was solved. "Afterwards, I felt safe in my backyard again, which sounds strange but is true," Tashiro said.

Thrilled with the outcome, she was bewildered by how long it had taken to find Nichols. "I was like, 'Why are you so hard to find? More people need to hear about you!'" Tashiro said.

Tashiro offered to help Nichols by working the phones at Into the Wild. In 2015, they partnered officially and rebranded as HEART Wildlife Removal. The company is now contracted by South Burlington as the city's animal control.

Nichols also works with the Burlington Police Department on animal cruelty cases, typically in her capacity as the humane investigator for the Humane Society of Chittenden County. She runs HSCC's Trap, Neuter, Return program for feral cats and does educational work through the organization. Oh, and she works on an occasional basis as a vet tech assistant at Burlington Emergency & Veterinary Specialists, "just to keep my basic skills fresh," she said.

Nichols has worked with animals almost continuously since she volunteered at a shelter in her native Delaware in the late 1970s. She's done volunteer work with oil spill response teams and wildlife rehabilitation efforts all over the country.

Her only break from the world of critters came 15 years ago, when she took a job as a state correctional officer in St. Albans. "I did that for about four years and then decided that trying to work with the human species just wasn't my gig," she said with a chuckle.

Nichols undoubtedly has plenty of reasons for preferring to work with wayward animals over wayward people. But a big one might be the creativity it takes to humanely rescue, remove and rehab critters that find themselves in places where they shouldn't be.

For evidence of that creativity, one need only look at the cache of tools Nichols keeps in the back of her small SUV. Many are everyday objects she deploys for surprising purposes.

Take her assortment of different-size colanders. They're not for draining pasta but for relocating the nests of baby birds from vents or chimneys to more suitable locations until the chicks' mother returns to move her brood. The slits in the colander allow rainwater to pass through the nest.

Then there are the bedsheets that Nichols has torn and tied together to make long ropes. She lowers these into chimneys or stovepipes to give trapped squirrels an exit strategy. If the critters need extra motivation to evacuate, she uses the noise from a small clock radio.

"Animals are always looking for dark, quiet places to den," Nichols explained. "So if you can disrupt the dark and the quiet, it will help them move on."

With apologies to "Vermont Edition," Nichols suggests tuning the clock radio to Vermont Public Radio or a sports-talk station, because the voices trick the animals into thinking humans are lurking nearby.

Then there's the large, crinkly Mylar balloon bearing a picture of a bright-yellow, bug-eyed Minion (as seen in the Despicable Me movies and countless Facebook memes). Nichols uses this as a scarecrow to ward off squirrels, groundhogs (which are members of the squirrel family) and woodpeckers. When inflated with helium, the balloon bounces; the Minion's big, shiny eyes mimic those of a predator.

"With the giant eyes, it's disturbing," Tashiro said.

Nichols uses another tool that's just as curiously festive — pinwheels — around the perimeter of a property as a squirrel deterrent.

Combined with other methods such as smell deterrents, she said, her remedies have proved effective not just at evicting nuisance animals but at keeping them away.

Nichols has a second priority, though: to avoid harming or killing animals. That's not the case with many local animal control companies, she said, which typically trap and kill nuisance wildlife and pests. Such animals, Nichols noted, tend to be exempt from Vermont's animal cruelty statutes.

"Just trapping an animal and not taking any other steps is a recipe for a recurring problem," said Barry Londeree, the Vermont state director of the Humane Society of the United States. Londeree and Nichols worked together to introduce successful legislation to more closely regulate Vermont's trapping and wildlife control industries. A version of their bill will go into effect next year.

"JoAnn is really a leader on this," Londeree said.

"She has skills and knowledge that would be useful even if you were running a business that did employ lethal trapping practices," he continued. "But she also knows how to do the things that will actually solve the problem long term, so that later in the year or the next season the same animals don't come back."

As for our mice problem, I'll be taking Nichols' advice and buttoning up the house. With any luck, the critters will leave us, and our olive oil, alone.