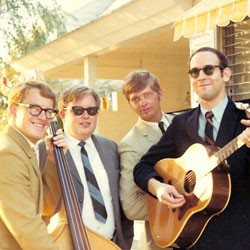 It is hard for this writer to type those words. This writer rummages for some wisecrack, some flip follow-up to take the sting out of them. (Novelist John O’Hara: “George Gershwin died on July 11, 1937, but I don’t have to believe that if I don’t want to.”)

Lussen himself would not stand for any such sentimentality if he could prevent it. “I don’t suffer fools gladly,” he likes to growl in his trademark deadpan. Then, after a beat, “But unfortunately that sometimes includes me.”

If Lussen had his way, he’d probably exit the stage with some corny line like that, at his own expense — and maybe after his “final” performance with the group earlier this month he did. He probably did.

All that said, Mike Lussen. Has left. The Woods Tea Company.

Don’t misunderstand. There will still be a Woods Tea Company now that Mike has hung up his magical five-string banjo. And his tenor banjo. And his guitar. And his bouzouki. And his bodhran. And the galluses that keep his jeans up. And the old gray fedora that even Woody Guthrie might have sent out to Goodwill.

There will still be this ensemble of professional folk musicians touring Vermont and the rest of America, connecting with the band’s devoted following that has grown to near-cult status over more than a quarter-century. The Company will still be ambassadors of Vermont, performing some of the most beloved and soulful music the genre has ever boasted.

It began for Lussen in 1961 in Elizabeth, N.J. One day the gawky 17-year-old walked into a record shop and bought an album by the reigning gods of American pop, The Kingston Trio. On the album was the song that changed his life: “The Hunter,” which featured a thumping banjo riff by the group’s lanky plucker Dave Guard.

“I have to do this,” Lussen remembers thinking. He’d never touched a banjo. He pestered his father, a tough-guy former Army Air Corps pilot, to buy him one. The old man was supportive as only dads of that era could be. “You’ll never have a pot to piss in,” he assured his son. But he grudgingly popped for a cheap banjo — Sears, Roebuck —and a Pete Seeger songbook.

Lussen taught himself the Dave Guard strum and the Earl Scruggs bluegrass stroke. “I never mastered drop-thumb, or clawhammer picking,” he told me one time, but musicians who know his work disagree. He has been hailed as one of the premier pickers in the nation.

Lussen was no armchair folkie. He rode a chartered Greyhound to Alabama in March 1965 to take part in the historic procession lead by Martin Luther King Jr. from Selma to Montgomery. As the bus was heading back north, Lussen looked out the window and glimpsed a 1963 Oldsmobile nose down in a ditch, surrounded by police. It was the car of Viola Gregg Liuzzo, who had been shot dead at the wheel just minutes earlier by Klansmen for driving black protestors to their homes after the march.

Folk singing was never just about banjo chords for Lussen after that. “I was grabbed by the spirit of those times,” he recalls. “I remember sleeping on Baptist church pews in Montgomery, being trained to assume the fetal position under police clubs. We survived on grits for a while.”

Yet, ultimately, it is the music that inflames Lussen, inspiring him to his wandering-minstrel life of 28 years. His respect for the genre endures as he approaches his 66th birthday, in June. Watching and listening to him, one never feels any of the distancing irony, that sense of “finger quotes,” that slips into the affect of many folksingers today — the need to assure a supposedly jaded audience that they are really just a little above this sort of thing, “amused” by it. There is no distance between Mike Lussen and his craft.

That was true, as well, of his longtime playing partner, the incomparable Rusty Jacobs, who was felled by a heart attack in 2007 at age 56. (It was true as well of the endearing fiddler and jokester Chip Chase, a latecomer to the band in 2006, who lasted only a year before dying of a massive embolism at 58.) Jacobs formed the Woods Tea Company in 1981 along with Bruce Morgan, a guitar-mandolin whiz and strong baritone. After Lussen joined up two years later, the trio solidified as a premier attraction in New England and around the country.

This “original” Woods Tea Company lasted until 1993, when Morgan moved to Montana. Musicians have drifted in and out of the ensemble since. The most recent iteration of the group was composed of Lussen, Howard Wooden on bass, Tom MacKenzie on hammered dulcimer, and Patti Casey on vocals, flute and pennywhistle. (Guitar playing is part of the job description for everyone.) But the Company’s lingering core identity — its persona, its enduring heart and soul — is the permanent legacy of Lussen and Jacobs.

The two complemented one another in a Tom-and-Huck sort of way: the mock-mournful, dry-witted Lussen and the elfin, secretly shrewd Jacobs winking at the crowds beneath his old cap. Audiences often knew the cornball repartee traded by these two well enough to recite it along with them, but their crisp comic timing made it fresh and welcome.

Now the pennywhistle man is gone, and the banjo picker has hung up his instruments. A musician’s life is seldom lucrative, and Lussen admits that, aside from that trusty pot, he has not accumulated much of a nest egg. “My next career might be as a Walmart greeter,” he jokes. Yet the financial future seems to trouble him less than the indignity of his arthritic hands and some troubling arterial coronary issues. He will live on in Warren, Vt., with his wife, Lisa Miserendino. He will find something to do, and he will get together now and then to jam with his friends from the far-flung New England folk community.

This fan and friend of Mike Lussen is pretty bummed that it’s time for him to be driftin’ along.

So long, Mike. It’s been good to know ya.

Castleton resident Ron Powers is the author of Mark Twain: a Life, Flags of Our Fathers and other books.