A Vermont town rallies to rescue its general store 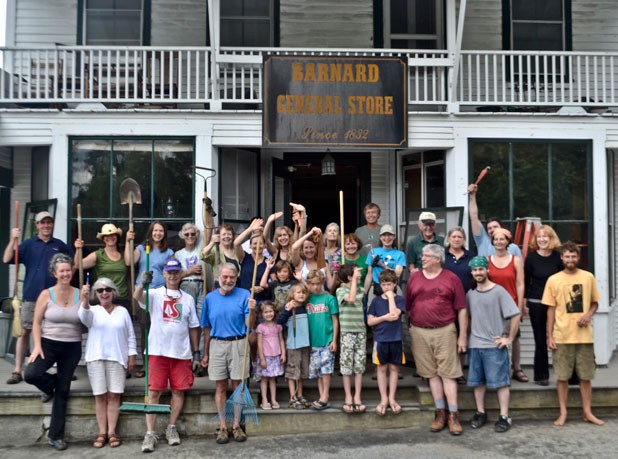 Across the street from shimmering Silver Lake in the bucolic village of Barnard, the Barnard General Store should be busy in August selling ice cream, beer and sandwiches to the many kayakers and swimmers who enjoy the lake. But financial difficulties caused the store to close its doors in May after 180 years of continuous operation — an economic-downturn story that even captured the attention of the New York Times. This summer, there is no ice cream to be had at this Route 12 landmark in east-central Vermont.

There is, however, good news: The town of Barnard is not letting go of its store without a fight. Instead, a group of determined townspeople is trying to resuscitate it.

Three days before the store closed last spring, local resident Hope Moffat used the town listserv to call a meeting in the basement community room of Barnard’s Danforth Library. Twenty-five people showed up on a Sunday morning to discuss saving the store, which was also an important gathering place for this rural village with approximately 950 year-round residents. At the meeting, Rick Carbin informed the group that, three years earlier, he had formed the Barnard Community Trust (BCT) specifically to aid the store.

In an interview conducted later, Carbin explained that the trust was his response to a letter that then-store operators Kim Furlong and Carolyn DiCicco posted in the town newsletter in late 2008, asking for financial help. Carbin connected the women with Paul Bruhn, the director of Preservation Trust of Vermont, who suggested buying the property from its owner, William Twigg-Smith. Carbin said his rationale for forming the BCT in 2009 was “to have an entity to potentially buy the real estate.”

The BCT at first offered Twigg-Smith a six-month leasing option, but he wanted to sell outright. The trust then countered his asking price of $795,000 with $450,000, which better reflected the property’s appraised value, according to Carbin. Twigg-Smith declined.

At an impasse regarding the “long-term problem of not owning the real estate,” as Carbin put it, the BCT focused on the “short-term problem of store finances”: It secured consultants to advise Furlong and DiCicco on product pricing and shelving, accounting systems, and other aspects of retail management. The store managed to stay afloat for a while. Then came Tropical Storm Irene. Carbin said the combination of Route 12’s closure after the flood and a slow winter without much snow — hence without the usual snowmobiler tourists — dealt a final blow to the store.

Again, the BCT jumped into action. Carbin, now president of the trust, and fellow board member Tom Platner returned to Twigg-Smith with a six-month-leasing proposal, and this time the property owner accepted. Some $20,000 was required for that lease. Carbin said it materialized in the combination of a $7500 balance in the Barnard General Store account at the Preservation Trust, an additional $2500 from the Preservation Trust’s revolving fund and a $10,000 donation from an anonymous community member.

On June 22, the BCT signed an agreement with Twigg-Smith. The trust has until the end of the year to raise an additional $480,000 to buy the property outright.

The morning after the papers were signed, three dozen volunteers showed up at the store to begin cleaning. They hung up pots of bright-blue lobelia and reclaimed the flowerbeds by the parking lot. When rain fell, they moved inside to continue their work — without electricity or running water. “But we still managed to get it done, because that’s Barnard,” said Moffat, who is now a member of BCT’s board.

On Saturday, June 30 — one week after the cleanup and less than two months after the closing — the Barnard General Store’s doors reopened. Although the BCT was still waiting for its vending licenses, volunteers began collecting donations for coffee, juice and homemade baked goods, which they served from 7 to 10 a.m. If the operations were skeletal, the turnout was not. Moffat estimated that about 100 people came through each morning that weekend, eager to learn about the store’s status as they sipped coffee donated by the Vermont Coffee Company. Within the first week of daily operations, Carbin reported, the “ongoing bake sale” netted $3000 in donations.

And the numbers kept climbing. According to Carbin, a $5000 grant was quickly matched, bringing the first week’s income to $13,000. In the second week of the “bake sale,” the BCT brought in $47,000. That bump resulted from a community-wide meeting about the store held at the town hall on July 9, at which, Carbin said, the BCT collected more than $20,000 and received a $25,000 pledge.

At that meeting, Carbin told the community that, though the BCT was currently running the store and owned the equipment — with the help of Preservation Trust — the group hoped a third party might be enticed to run the store. Bruhn, also present, talked about Preservation Trust, which has helped save numerous other village stores in Vermont, including one in Putney. He stressed that, for the store’s long-term sustainability, the community should own the property. “Losing that store rips out the heart of this community,” Bruhn noted sympathetically.

But Carbin conveyed a confident, optimistic tone throughout the meeting. After announcing that $25,000 had been donated that day, he challenged the community to match it within two weeks. What would happen to the donations, someone asked, if the full $500,000 didn’t materialize by the year’s end? “My goal is to raise all the money we need by the end of the year,” Carbin said without hesitation. “That’s what we’ve got to focus on.”

He added that the BCT did have the option to extend the leasing agreement and that donations could be given with the stipulation that they be returned if the store purchase fell through.

Carbin’s optimism was contagious. “If people work together, they can do anything they want to do,” opined townsperson Ralph Ward.

That just might be the case in Barnard. By mid-July, Carbin said, the BCT had $93,300 in hand and more funds pledged.

Other local groups have joined the cause. The Silver Lake Association, the Barnard Historical Society and BarnArts Center for the Arts, along with the BCT, will host a fundraiser, dubbed Festival on Silver Lake, this weekend.

“We’re moving fast,” said Carbin. Indeed. In just a few weeks, the nonprofit BCT has reopened the store with an all-volunteer staff, launched a professional-looking website, acquired 150 new members, and made plans for a pledge drive and formal mailing to the community. And, as soon as those vending licenses arrive — any day now — the store will once again offer basic groceries, including ice cream to eat by the lake before summer’s end.

Festival on Silver Lake will be held in Barnard at Route 12 and Stage Road. Saturday, August 11, will be Barnard Day, with games for children, a community boat race and history displays on the general-store porch from noon to 5 p.m. On Sunday, August 12, the festivities start with a Float Your Boat gathering on the lake at noon, followed by a community parade at 2 p.m, community art projects and live music all afternoon, and a street dance with Bow Thayer and Perfect Trainwreck from 6 to 8 p.m. $5-10 suggested donation. friendsofbgs.com