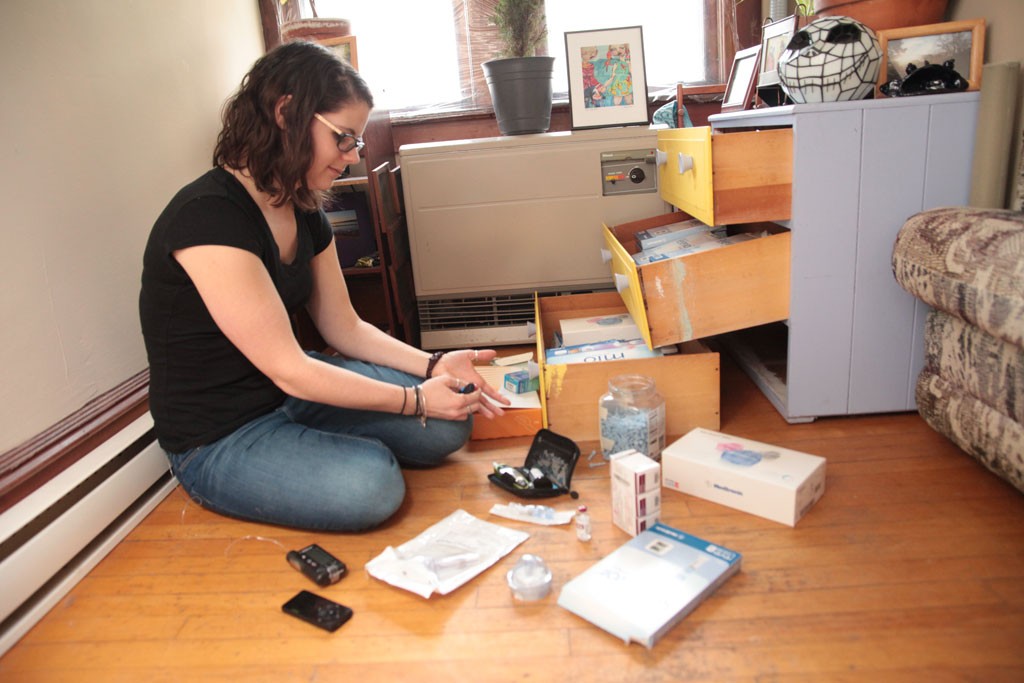 As 2014 drew to a close, 24-year-old Alissa Carberry hoped that her insulin pump wouldn't need to be replaced. Carberry has Type 1 diabetes, a chronic disease that requires expensive medication and constant monitoring. On paper, she was lucky: She had insurance through her employer, Burlington Children's Space, so her monthly insurance premiums were covered.

Yet Carberry still struggled to pay her medical bills. She faced a $1,900 deductible before her insurance — obtained by her employer through Vermont Health Connect — even kicked in. When it did, she was still on the hook for 40 percent of the cost of her medical supplies. The pump alone, with a $5,000 price tag, would cost her $2,000. She said she comparison-shops whenever possible, but "There is no generic for insulin pumps or insulin." 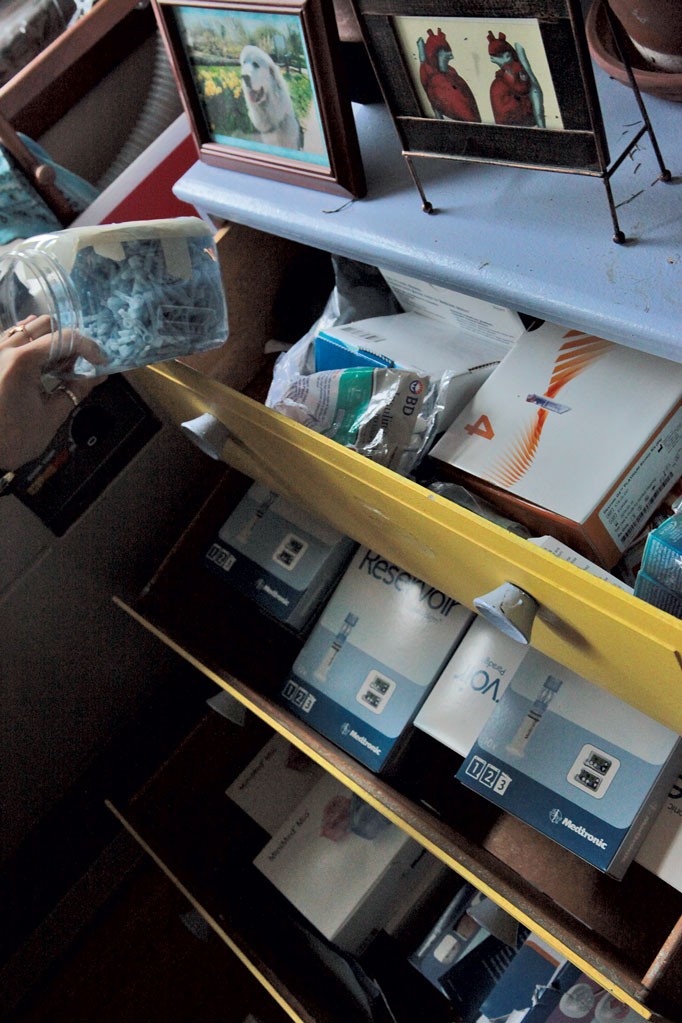 Carberry is one of many Vermonters who can barely afford health insurance but also can't live without it. A large portion of her $30,000 annual income is consumed by medical costs.

This year, Rep. Paul Poirier (I-Barre) introduced a bill to boost state subsidies for low-income individuals who have policies through Vermont Health Connect — policies that, Poirier argues, don't do enough.

Poirier has pushed for an increase in aid to underinsured Vermonters since the state first adopted the health exchange — as mandated by the 2010 federal Affordable Care Act. When that happened, two aid programs designed to help people pay medical costs were eliminated: the Vermont Health Access Program and Catamount Health.

To make up for the loss, the legislature and the Shumlin administration allocated $3.8 million to reduce premiums, and $1.5 million to shrink deductibles and copayments for those who earn up to 300 percent of the federal poverty level and are ineligible for Medicaid.

The online exchange, Poirier believed, was temporary: The state was scheduled to move to a government-financed health insurance system that covered all residents by 2017. But in December, Shumlin pulled the plug on that plan, saying he couldn't make the financing work.

That, said Poirier, made it more important to address the financial burdens placed on people who buy insurance through the exchange. His push to reduce the cost-sharing burden took on renewed urgency.

Federal law allowed states to raise the income eligibility for their Medicaid programs — which Vermont did. It also offered tax credits to reduce premiums to individuals and families with incomes up to 400 percent of the federal poverty level when they bought insurance through the exchange.

The Shumlin administration also proposed other reforms, including an increase in cost-sharing assistance. "What we had been hearing from hospitals and consumer advocates was concern around cost-sharing," explained Robin Lunge, the governor's health reform director. Despite a multimillion-dollar budget gap, the governor proposed adding $2 million for cost-sharing aid to be offered when new policies take effect in January. A full year at this higher level of aid would cost $4 million.

Poirier's proposal called for twice as much: $4.1 million in next year's budget and $8.3 million the following year. The House Health Care Committee voted for Poirier's plan. "Our committee considered this a very high priority," said committee chair Bill Lippert (D-Hinesburg).

"There are too many Vermonters who have insurance but can't afford to use it," agreed vice chair Chris Pearson (P-Burlington). Pearson, Lippert and Poirier all said hospital officials told them they were seeing more insured people defaulting on their co-payments. They cited data from the 2014 Vermont Household Health Insurance Survey last fall that found 27 percent of Vermonters with private health insurance could be considered underinsured — facing high deductibles and out-of-pocket expenses they could ill afford based on their income.

Trinka Kerr, chief health care advocate at Vermont Legal Aid, said her office hears complaints about high deductibles and co-pays for insurance obtained through the exchange. "When people compare it to Catamount, it falls short," she said.

For example, a person earning $29,000 would have a $600 deductible under the House plan, compared with $1,500 under current health exchange plans. That person would pay $1,000 under Shumlin's proposal.

The Health Care Committee's challenge: to find a way to pay for the expanded subsidy given that the budget writers working across the hall from them in the Statehouse can't spare a penny. The House Appropriations Committee has been grappling with financing existing programs as the state faces a projected $113 million revenue shortfall.

The health care panel proposed a 0.3 percent payroll tax — half as much as the governor suggested to pay for his health reform plan — along with a two-cent per ounce tax on sugar-sweetened beverages. Both potential revenue sources have plenty of critics, especially among businesspeople. Legislative leaders also have yet to commit to the House health care plan.

"Cost-sharing is pretty important," House Speaker Shap Smith (D-Morristown) said. But in the next breath he noted, "We can't afford what we are doing now." That House Appropriations Committee chair Mitzi Johnson proposed to eliminate funding for the current cost-sharing plan just one day after the House Health Care Committee voted to expand the program illustrates the conflict.

"We are going to try to figure it out," Smith suggested, indicating that the promise of increased cost-sharing aid wasn't dead.

It's not a priority for House Republicans. House Minority Leader Don Turner (R-Milton) argues the state should focus first on fixing Vermont Health Connect. "Until we get our house in order, we shouldn't put money into anything new," Turner said.

"The affordability question is important," said Senate Finance chair Tim Ashe (D/P-Chittenden). But he said he wants to better understand the need. "You don't want to pour new money into a system for folks who don't use it." As for how to fund a potential increase, "The priority on the Senate side is to see if we can address the affordability for consumers with dollars already being spent in the system," Ashe said.

Last Friday, the Shumlin administration created new uncertainty when it announced that if the online exchange fails to meet specific milestones, the state will move to a hybrid federal exchange beginning in 2017. Such a move could threaten the state's ability to offer its premium and cost-sharing assistance.

Poirier, experienced in wheeling and dealing on bills, remained hopeful that a compromise could be found on the funding for expanded subsidies. A penny-per-ounce tax on sugar-sweetened beverages, perhaps?

Vermont's cost-sharing assistance has always been restricted to individuals and families buying private policies rather than ones through employers, which mirrors restrictions on federal assistance. Poirier's proposal wouldn't change that.

Carberry now has better health coverage through her partner's employer, a large business that isn't required to purchase the health insurance plans sold on the state exchange. She pays $86 a month and has a $1,000 deductible and a total out-of-pocket maximum of $2,000. When she replaced her insulin pump in February, her share totaled $1,200.

Given Carberry's income, though, those expenses are still not sustainable. "This is not a solution for me," she said.

Carberry believes lawmakers should make insurance affordability a priority, but she sees subsidies as a temporary solution.

"It is hard to say what the real remedy would be," she said. "There is so much work we have to do. It really involves a lot of people coming together and hashing it out."