Heads Up, Beethoven Fans, for a Live Concert and Free Download 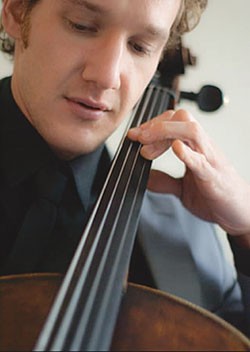 Here’s a holiday-gift alert to Vermont’s classical music fans: Beethoven’s complete sonatas for piano and cello are coming your way soon. These five extraordinary duo pieces, written over the course of Beethoven’s career, will be performed at a single concert in Burlington by two young New York City-based musicians, pianist David Kaplan and cellist Benjamin Capps, on January 5. Burlington Ensemble is hosting the concert for a mere $5 per ticket, with most of that donation going to support the Vermont Youth Orchestra.

You can also hear the complete cycle for free. Over the last couple of months, Kaplan and Capps have been recording the sonatas at Vermont Public Radio’s studio under the eye of classical music host and producer Joe Goetz, the musicians’ friend and fellow late-twentysomething. VPR will offer downloads of these live, minimally edited recordings on its website during the month of January.

This kind of collaboration is a first, says BE cofounder Michael Dabroski. “VPR does not give up their studio space like that,” he notes. “It’s an extraordinary gift to BE and to the community.”

More typically, the classical team at VPR invites musicians to do a one-time live performance in its studio just ahead of a scheduled public concert.

Goetz came up with the Beethoven recording idea, Kaplan says. “This project came about mainly because of his enthusiasm,” says the Yale School of Music-trained pianist. Goetz says he will launch the free-download month by airing the recordings of all five sonatas on January 2, 3 and 4 during his program, which runs from 3 to 7 p.m.

Capps and Kaplan, who were formerly at the Juilliard School together, reconnected at a Perlman Music Program festival two years ago and have been playing together “here and there ever since,” says Kaplan.

Goetz met Capps at a Manchester Music Festival; learning the cellist needed gigs, the radio producer suggested he contact the “fledgling chamber group up in Burlington.”

On the recordings, Goetz will include clips of both musicians talking about the music. Kaplan, after dryly assessing the sonatas as “not bad,” waxes eloquent. “Each one offers something completely different,” he notes. “The first stretched the form of the sonata. Beethoven had an ax to grind” — he needed to be noticed in Vienna — “but of course it’s never just that, which is what makes his music great.

“The third is a very heroic piece,” Kaplan continues. “It fits right into Beethoven’s ‘heroic’ period, which tends to showcase protagonists, like the fifth symphony and the fifth piano concerto.”

The last two sonatas are of a different order, says the pianist. They push form in “much more spiritual” ways, and “they’re at once unified and impossibly fragmented. They keep you on your toes from phrase to phrase and note to note,” Kaplan adds. “Then you reach the end and you realize not a single note could have been different.”