Going "wild" at the Farmhouse 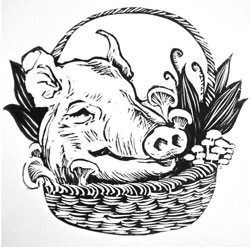 A recent advertisement for a Wild Edibles event at the Farmhouse Tap & Grill caught my eye. I had never before been dared by a restaurant to eat “heads, feet and tongues” or “various marine cephalopods.” Yet every time the staff at the Farmhouse plays with the food, customers seem to eat it up. This seemed as good a time as any to find out why.

The Burlington gastropub has been a raging success since it opened, in May 2010, in a renovated McDonald’s on Bank Street. Although a burger at the Farmhouse costs $14 — $13 more than a McDouble — many locals apparently would rather bite into grass-fed beef from Jericho Settlers Farm than a machine-formed disc from Lopez Foods. The Farmhouse menu offers more than fancy burgers, though. The restaurant hosts themed food and drink events every Wednesday. Some feature such culinary concepts as snout-to-tail meals — where every edible part of a whole hog is prepared and served — while other evenings might be devoted entirely to a brewery such as Montréal’s Dieu du Ciel.

These events inject a little color into the kitchen routine, and, as chef Phillip Clayton puts it, “We have the staff and the audience; what is there to lose?”

The theme nights also drive sales and volume, turning Wednesday evenings into a second weekend for the restaurant. More than just a marketing ploy, though, the events allow the chefs to playfully apply their skills. The menus can be unusual, but most are in keeping with the key concept of the Farmhouse: locally sourced ingredients and simple, gastropub fare.

Clayton welcomed me behind the scenes as he assembled the Wild Edibles courses and detailed the origins of the ingredients and the preparation of each dish. The menu was certainly adventurous: corned beef-tongue salad, pig’s feet and beans, fried headcheese, wild foraged mushroom pasta, and grilled baby octopus served over braised lentils and young fennel. But, having already tried cricket, wildebeest, Rocky Mountain oysters and pigeon pie in various locales, I was looking for something bizarre — brains, maybe, or amphibians, forest insects or unusual roots or tubers.

Though this Farmhouse menu seemed like an understated interpretation of “wild,” I was happy that most of the ingredients were seasonal and local. For instance, farmer Langis Anctil, who supplies the Farmhouse with rabbit meat from his Fresh Tracks Game & Poultry in West Haven, provided morels foraged on his land. But some of the items on the menu weren’t wild at all — I certainly haven’t heard of wild beef cattle — or local, given that the octopus came from Greece.

I could not help but drool as I watched a line cook assemble a delicate fan of live scallop ceviche topped with pickled radishes, followed by a towering salad of greens and confit beef tongue. I decided to try the headcheese, because I felt challenged by the idea of a cold, gelatinous square of boiled hog skull. But Clayton chose to fry the headcheese and serve it with arugula, buttermilk and pickled onions. I was relieved by the texture, and the flavor was salty and savory enough to distract me from thoughts of head cartilage, snout and boiled teeth.

This wasn’t the first Wild Edibles night at the Farmhouse. The restaurant first experimented with odd cuts of meat and foraged fungi last winter. It was such a success that customers demanded a sequel. Clayton is pleased that the strange themes have drawn crowds, and he hopes the public equally approves the restaurant’s new regional food and wine series, which will center on the traditional dishes and drinks of a particular locale. Some events will be held in the outdoor beer garden — where Clayton’s wife has planted herbs and vegetables for the restaurant — and some will revolve around meat cooked in the massive smoker behind the kitchen.

Although this night was not as exotic as I had hoped for, the food was intriguing and delicious. I plan to take a seat in the garden and go wild another night.