Headed to Work? A Lot Is Riding on the Future of the Office | Business | Seven Days | Vermont's Independent Voice

Headed to Work? A Lot Is Riding on the Future of the Office 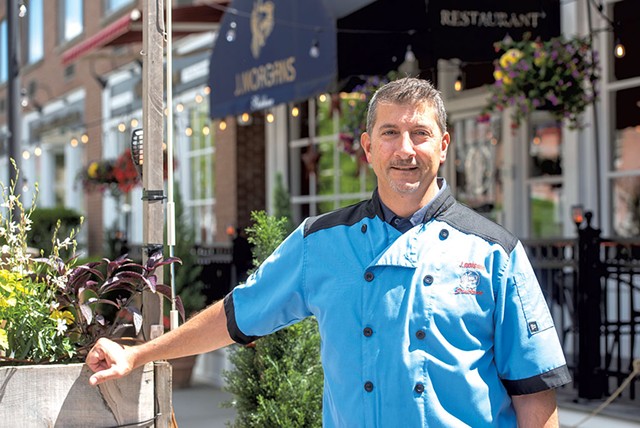 Workers took just a few days to clear out of their offices when the pandemic arrived in Vermont, leaving leftovers to languish in the break room fridge and plants to wither on windowsills.

But it could take years to figure out what workplaces — and the communities that rely on them — will look like as COVID-19 restrictions evaporate. With the vaccination rate rising, managers must plan for a productive future using untested assumptions about the spread of the virus and its variants.

Meanwhile, commercial landlords are looking for ways to show it still makes sense for companies to gather at an office. Local businesses in cities such as Montpelier and Burlington are pondering a future that might hold a smaller daily influx of workers. And many employees want to hang on to the flexible lifestyle they've grown to appreciate.

For Vermont's largest employer, the state, there won't be one sweeping decision on remote work. Administration Secretary Susanne Young told state workers on May 14 that if they can perform their jobs remotely, they should expect to keep doing so through September 1. After that, they'll need approval under an existing telework policy.

Many of the state's 8,000 employees never did transition to remote work, including corrections officers, laboratory workers, and those in maintenance and transportation.

For the others, it all comes down to productivity, Young said in the memo. Many of the decisions will be up to individual managers.

"Honestly, I would consider changing fields if my employer forced a return to office life." Survey respondent tweet this

"It is expected that this will be an interactive process and employee feedback will be part of the planning," Young wrote.

Most workers at National Life Group, which employs 800 people at its Montpelier headquarters, are going back to the office. Ross Sneyd, director of corporate communications and community relations, said almost everyone will be encouraged to work in the building by the beginning of 2022, with some exceptions.

"These are conversations that are happening now among managers," said Sneyd, who himself has been doing his job from an island in Maine, where he and his partner own a second home. "The goal is to make sure we are able to serve our customers and clients, and then we make sure that people who might still have some reason not to be in the office can be accommodated if their job allows it."

Others are taking a more flexible approach. At the Vermont Arts Council, executive director Karen Mittelman polled her 10 staff members to see what they would prefer, then drafted a policy that calls for everyone to work in the Montpelier office at least two days a week. She said staffers were at least as productive during the pandemic as they were before, if not more so. Wi-Fi is spotty at her home in Marshfield, so Mittelman already makes many trips to town. But she strongly supports the members of her staff who can make telecommuting work.

"We all discovered there are things we love about being at home," Mittelman said, noting that one employee saves two hours a day commuting. Mittelman herself likes to walk her dog at midday in Marshfield. "We sit indoors all day at work. There is no reason, when you are working productively at home, that you can't take a break." 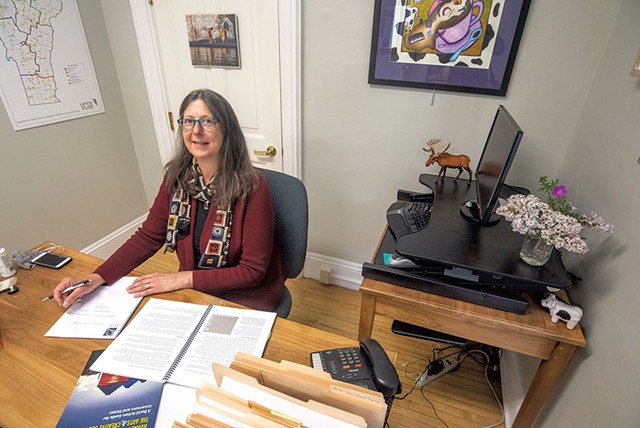 The future of the office will have a big impact on the neighborhoods and downtowns where people have worked.

Tim Heney, a longtime Realtor and property owner in central Vermont, said his commercial tenants started to move out of their office space last summer. Some of his tenants have told Heney they're waiting to see how many people end up returning to their desks before they make decisions on reducing office size, he said.

"There is a general understanding that it will be different," Heney said. Much of the newly vacated space in Heney's downtown buildings in Montpelier is on upper floors and was used as offices. Noting the housing shortage in Montpelier, Heney has started the paperwork he'll need to convert some of that space to apartments.

"It's not going to be a piece of cake," Heney said about the permitting process. "But we can do it."

Fred Bashara, who owns J. Morgan's Steakhouse near the Statehouse and several state office buildings, estimated that 12,000 people a day have stopped working in downtown Montpelier as a result of the pandemic. His lunch business is down by about half, he said.

"When all's said and done, I bet most people are going to come back to work," he said. "I think people need to be out of their house for their own sanity."

Research shows personal vehicle travel dropped by nearly a third in Vermont after the governor declared a state of emergency in March 2020. A survey the following month by Resource Systems Group, a national transportation research organization in White River Junction, found that 68 percent of women and 63 percent of men nationally said they'd prefer to work at home at least four days a week.

Some of this change started before the pandemic, noted Heney, who had moved his own company to a smaller space in 2019 as it became easier for his agents to work remotely.

Meanwhile, workers are making it clear they're in no hurry to go back to the office.

"Honestly, I would consider changing fields if my employer forced a return to office life," said one respondent to a survey organized by the University of Vermont's Center for Research on Vermont.

Of more than 400 Vermonters who responded anonymously to the survey this spring, nearly 90 percent want their employers to do more to support telecommuting, said center director Richard Watts. Asked a series of open-ended questions about their workplaces, many said that working at home had significantly improved their quality of life.

"My 'office' is a windowless, ventilation-less cave that made me loathe going into the office pre-pandemic," one wrote. "Now, the thought of going back to it makes me totally anxious."

Many welcomed the absence of a commute.

"For the first time in my working career, I have an amazing work-life balance," wrote another.

The pandemic has been full of surprises, and it is far too soon to know whether it holds any more. Insurance companies are now working to indemnify their business clients in light of companies' vaccination and mask policies, helping them interpret Occupational Safety and Health Administration regulations, and steering them through the process of crafting overall COVID-19 action plans. Many companies are only now surveying their workers to see how they feel about returning to the office, said Shannon Prescott, a program coordinator for the Richards Group, a Brattleboro insurer.

"It's really confusing right now, to say the least," said Prescott, who herself is working from her home in Greenfield, Mass. She's helping her clients figure out which state and federal regulations apply to their businesses and obtain new coverage.

"This is a really complicated process for employers," she said.

Mittelman agreed. She has four workers who were hired right before or during the pandemic who have barely worked in their offices; two are supervising people they haven't worked with face-to-face. The managers are trying to meet more in person, even outdoors. Mittelman isn't requiring those in-person meetings, but she's recommending them.

"Honestly," she said, "we are still just figuring all this out."

The original print version of this article was headlined "Headed to Work? | A lot is riding on the future of the office"