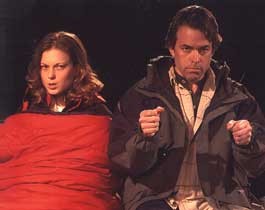 Claire is a melancholic teen-ager stashed away in a remote psychiatric ward. Doctors try in vain to pry words out of her, but Claire spends her days trying to cheek her pills and casting stern looks at her captors. In The Big Random, a new black comedy written by Middlebury playwright Dana Yeaton and produced by Vermont Stage Company, we soon learn that real life is just not as interesting to Claire as the figments in her head. The play follows Claire’s hospital breakout and mad, cross-country trek.

Her “rescuer’ and sidekick is a man who claims to be her godfather. Within minutes, Claire convinces Roland to help her escape the sanitarium for some good French fries. A middle-ager from Florida who has just left his wife, Roland is an easy mark for this manipulative adolescent. Soon the platonic pair is heading for Canada, and since Claire is just shy of 16, Roland finds himself a small-time fugitive, armed with only a truck and a handful of money.

The Big Random certainly lives up to its title: The scenes are jackrabbit quick, shifting deftly from a dark road in Massachusetts to a checkpoint on the Canadian border. We watch Claire trying to hike through the woods with only a Bic lighter to guide her, and suddenly it’s morning and the duo are facing off with a park ranger.

To make their haphazard lifestyle more complicated, Claire’s unnamed medication starts to wear off, and she lapses into dramatic hallucinations: First she’s a French Resistance operative, refusing to talk under torture; next she’s an American tourist bound and gagged by Spanish revolutionaries. This only pisses off the straight-laced Roland, who couldn’t handle his own wife’s alcoholism, much less the crumbling mind of someone else’s daughter.

As Roland slowly learns how to deal with Claire, he decides to hide from the authorities in the wilderness of northern Quebec, breathing fresh air and canoeing down icy rivers. But Claire wants to entertain every fantasy in her head, leaving them with a lot of arguing and nowhere to go. Yeaton’s script strongly develops these troubled antiheroes, though it does raise a lot of questions: What exactly is Claire’s illness? Why did her parents abandon her in the hospital? Why does Roland let some psycho girl push him around, even if they are related? And is he really her godfather?

Hallie Zieselman’s lonely set reinforces the play’s psychological ambiguity, using only a few simple platforms, a couple of chairs and a small array of solid props, including sleeping bags and bottles of champagne. Roland and Claire pantomime their way through a camp store, the woods, a few hotels and the nave of a cathedral. No painted flats lead them from scene to scene; no signs point the way home. The play is performed in the round, which augments the feeling that the outlaw duo is trapped.

Religion plays a significant role in The Big Random. Claire picks up a Gideon Bible in their first motel and flips through it skeptically. Roland, an ex-Catholic, begins to question why he stopped attending church. Yeaton is too sharp a writer to proselytize, but he is comfortable giving the pair some sins and miracles to contemplate. When Claire starts taunting Roland with the Ten Commandments, he rips the Bible from her hand and shouts, “This isn’t a game!” And yet, given their haphazard road trip, Roland sounds only half-convinced that it isn’t. By the end of Random, their erratic adventures don’t seem so random at all, but rather links in the chain of a divine master plan.

Director Jim Gaylord is adept at blocking these character-driven scenes, framing each within invisible boxes that contain his actors. Gaylord also has the luxury of a talented cast: As Claire, Genia Michaela is whiny and obnoxious, doubting her rescuer at every turn. Her performance peaks with hysteria and lunacy; her eyes stare blankly and her body contorts and shivers. She’s believable when she says, “The realer you get, the more you hurt.”

Stephen Paul Johnson is an earnest Roland, a nice, post-alcoholic guy who just can’t keep up with Claire’s whims. Johnson resists all that Method overacting, staying calmly frustrated until Claire finally pushes him over the edge. And even then he’d rather destroy himself than ruin the goddaughter he swore to protect.

Every minor character — and there are many — is played by either Melissa Lourie or Harry McEnerny, and their performances are even more versatile than Zieselman’s stage set. Mastering accents, languages, spunky youthfulness and decrepit old age, Lourie and McEnerny clearly have fun with their roles. Lourie’s ever-smiling waitress is a total contrast to her irate German tourist; the same goes for McEnerny’s enthusiastic sports-store clerk and brutally formal park ranger. These are exceptional character actors who reinforce the adage that there’s no such thing as a small role.

Like many well-crafted relationship dramas, The Big Random empathizes with everybody: It’s hard to fault Claire for her antics, even when she starts bleating like a sheep at a Catholic service. Nor do we write off Roland for letting a kid drag him around. For all their angst, Claire and Roland have the innocence of children; rather than sensibly check out a map, they prefer to flip a coin. Between Claire’s schizophrenia and Roland’s past mistakes, Yeaton seems to suggest, reason is pointless; the only meaningful path is a random one.