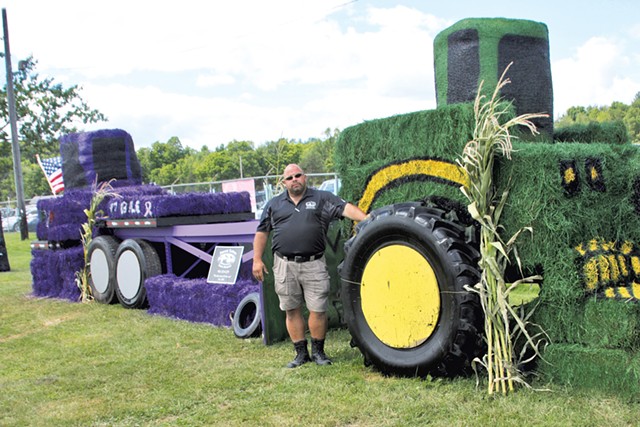 Ever wonder who's behind the huge roadside puppies, teddy bears and maple syrup jugs made of strategically stacked hay bales? Anyone who regularly drives through southern Chittenden or Addison counties has undoubtedly spotted the painted-grass creations. They're the work of Wyatt Vincent, owner of VT Bale Creations. For the last four years, the 46-year-old Addison resident has been turning discarded hay bales into sculptures. He and his wife, Christine, build them mostly to help raise money and public awareness for local charities and nonprofits.

Last week, Vincent was at the Addison County Fair & Field Days showing off eight of his recent, and not-so-recent, creations. They included the seven-foot-tall, black-and-yellow Minion from the animated film Despicable Me, Mater from the 2006 film Cars, a trailered U.S. Army helicopter and a POW ribbon.

The creations sat just inside the fair's front gates and attracted swarms of young children as parents snapped photos. Ann Keogh, a native of Ireland who now lives in Vermont, stared in awe at the POW ribbon. It intrigued her, she said, because her now-deceased father had been in the Queen's Regiment of the Irish Guards during World War II and spent years as a German prisoner of war in Poland.

Vincent grew up in Addison County but isn't a farmer — he owns a landscaping business — and readily admits he had limited artistic abilities as a kid. But in 2011, after spotting a hay-bale motorcycle in Killington, he said to himself, Hey, I can build one of those!

And so he did. Vincent's first creation, also a hay-bale motorcycle, sat outside the Cyclewise Suzuki dealership in New Haven for years. Next he built a dog for the Addison County Humane Society as a way to help the animal shelter raise money. One hay-bale dog soon turned into 12, he recalls, as other groups also approached him for fundraising help.

In a state where billboards are illegal, Vincent explains that his creations draw attention, and sometimes donations, to his causes. After one woman from New York City saw one of his hay puppies, she donated $5,000 to the humane society in his honor.

Some of the sculptures, like Vincent's Holstein cow and calf that he built outdoors last January in subzero temperatures, are fundraisers for the local chapters of 4-H and Future Farmers of America.

Occasionally, Vincent works on commission. Klaus the dog, which sits in quiet repose outside Shelburne's Automaster car dealership, and the bears outside the Vermont Teddy Bear Company in Shelburne are a few examples. Most, however, are labors of love that Vincent donates to various causes, including research for breast cancer and spinal muscular atrophy.

Though hay is plentiful in Vermont — more than 404,000 tons were grown in 2012, according to data from the Vermont Agency of Agriculture, Food & Markets — Vincent emphasizes that his bales couldn't have fed cows, horses or goats. Most are either donated or purchased at a discount from farmers because they contained water, mold or mildew and thus cannot be used for food or bedding.

Though the sculptures are composed of little more than hay, recycled paint, chicken wire, baling twine, zip ties, lumber and spent tires, they aren't cheap to produce. Vincent estimates that they run him anywhere from $500 to $3,000 to create.

Typically, he builds them on location, either alone or with help from his wife. He begins by positioning the largest bales with a tractor, then shapes a chicken-wire frame with pliers and stuffs it by hand with additional hay. Once the form meets his satisfaction, Vincent spray-paints it with a commercial sprayer. The entire process takes anywhere from two to five days.

It's not a lucrative pursuit — and, incidentally, he's allergic to mold, mildew and hay — but Vincent is getting more ambitious nonetheless. "I'd love to build a castle in someone's field, but I'd have to get a farmer who'd let me stack all of his hay," he says. "And, there's going to be a Champ sighting soon. It's going to be a pretty cool one, about 150 feet long with three humps."

For Vincent, it's all about the reactions his creations elicit. Recently, he got a call from an out-of-state truck driver who routinely drives Route 7 and Route 22A. The man called to say he stopped at every sculpture to take pictures, then looked Vincent up on the internet and was impressed with the causes he supports.

"Those are the types of things that make me smile," Vincent says. "It's all about the kids and the smiles. It touches a lot of people, so that's all I want."