'Hawk' Eye: A former helicopter pilot targets the movie about the U.S. raid in Somalia 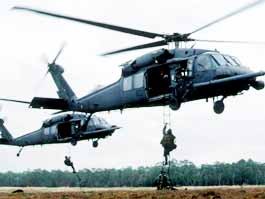 The movie and the book, Black Hawk Down, refer to a U.S. military operation in Mogadishu, Somalia, in October 1993. An elite U.S. Army force, supported by Black Hawk helicopters, seized corrupt African warlords who were diverting food aid from their people.

During the operation, which lasted less than two days, enemy militia shot down two Black Hawks and killed 19 American servicemen. Enraged Somalis dragged at least one of the Americans, a helicopter crew chief, through the streets of Mogadishu.

This film, and a more recent U.S. military operation in Afghanistan, led me to recall my own days in Vietnam, when I flew UH-1 (HUEY) troop transport helicopters in the Mekong Delta. Much has changed in the 35 years since then, but my reservations about the effectiveness of helicopters as combat transports remain. So do my concerns about acts of war themselves.

First, a little background. For me, flying began in 1965, my senior year at Middlebury College. Thanks to a Reserve Officers Training Corps program, I and six other classmates learned to fly a single-engine Cessna 172 out of the Middlebury airport. Our instructor was a crop duster of French-Canadian descent named Alphonse Quesnel — an old-school, “seat of the pants” pilot who learned flying not from instructors, but from building up thousands of hours banging around in the sky. He never earned an instrument rating, but that didn’t keep him from penetrating clouds, or “scud running” from one Vermont farm to another.

Soon after World War II, Al bought a fleet of Stearmans, beautiful old canvas-covered bi-planes with huge reciprocating engines. He took out the front seats and replaced them with bins. He filled the bins with dusty pesticides and sprayed apple orchards across the Champlain Valley.

Someone once called him the “Farmer’s Flyer” because he saved apple orchard owners thousands of dollars a year in insect and pest damage. Al taught us how to land and take off, stay straight and level, make a forced landing, and navigate from Middlebury to Plattsbugh and back. And he was not to be confused with the “Flying Farmer,” another Vermont legend who dazzled crowds by flying upside down and performing other “death-defying” stunts.

After college and basic officer training, my classmates and I enrolled at the U.S. Army helicopter school. This meant four months of flight training at Fort Wolters, Texas, followed by four months at Fort Rucker, Alabama. Black Hawks had not yet come into service. During advanced training, we flew the HUEY helicopter, which became known as the “workhorse” of Vietnam.

Nothing I experienced in flight school or Vietnam approximated the intense dangers faced by the pilots who flew in Somalia. But I did have one experience that suggests what it’s like to be in a disabled helicopter.

This occurred one afternoon while I rode in the back seat of an old A-model HUEY. Up front, the student pilot mistakenly “bled off” too much rotor rpm in a high-speed, 180-degree autorotative turn.

When a helicopter loses rotor speed and falls to the ground at a rate of 3000 feet a minute, the thin, olive-drab underbody crushes like a dropped Christmas tree ornament. Metal and Plexiglas doors fly off and spin through the air like misshapen, oversized Frisbees. Your head jerks, your helmet bounces off the padded ceiling, and your legs, arms and hands flail as you try to find the floor or grab something solid.

On the cockpit instrument panel, a small red flight flashes and a warning sound whines and whines — RRRPPPP … RRPPPP … RRRRPPPP. The engine-rotor tachometer needles wind down. Rotor blades, once a forceful blur holding the aircraft aloft at speeds up to 120 knots, become pathetic, sickly pieces of flopping, useless metal. After the impact, JP-4 jet fuel spills from cracked fuel cells and seeps across the runway and through the nearby grass. The hot sun glares; thick, humid haze hangs in the air. You don’t know where you are.

This crash occurred during my final days at the helicopter school. The instructor and student pilot survived, with back injuries. I was unhurt.

A few weeks later, I was flying HUEYS for the 175th Aviation Company in Vinh Long, Vietnam. Week after week for 12 months, I flew in formations of 10 helicopters with, among others, a pilot named John Myhre less than a few hundred feet away. John’s aircraft engine failed at night while he flew above clouds — one of the most dangerous situations a pilot could face. With great skill, he safely brought the aircraft to the ground.

Months later, his tail rotor fell off while he prepared to fly. And on Easter Sunday, 1967, he was shot down in a landing zone. Desperately, he clung to the muck of a rice paddy as automatic weapons fire snapped over his head. A so-called “friendly” Vietnamese trooper thought he was dead, and approached with a knife to cut off John’s wedding ring. Finding a burst of energy, John throttled him with his hands. Enemy fire finished the job, ending the Vietnamese soldier’s life.

After enduring months of hospitalization for wounds in his leg, John returned to Vietnam — twice — for 12-month tours. I returned home in October 1967 without a scratch.

Black Hawk Down, currently playing in local theaters, tells a different and tragic story. Like most war films, this one conveys the random, senseless horror, and the valor of men who give their hearts and lives. For the most part, the movie does not glorify combat. It does not end with images of smiling U.S. Army Rangers shouting “Hoo-ah.” It ends with images of olive-drab, rubberized body bags — gleaming, inert packages of death.

Some pilots are impressed with the relative authenticity of Black Hawk Down. One, Captain Gerry Izzo, circulated an e-mail among active and retired U.S. Army helicopter pilots, saying the movie was “excellent.” Izzo, a pilot on one of the Black Hawks in Somalia in October 1993, signs his message “NSDQ” — meaning Nightstalkers Don’t Quit. In his view the film is “technically accurate and dramatically correct. In other words, the equipment, lingo and dialogue are all right on.”

Often, though, good triumphs over evil in cinematic versions of war — especially if good equals the U.S.A. Lately, this formula has come to us in films like Saving Private Ryan, Pearl Harbor and We Were Soldiers. All are superior to combat-dodger John Wayne’s Green Berets, the worst piece of tripe ever produced on the Vietnam War.

In many war films, too, screenwriters and directors work from biased views, even if the movie, like Black Hawk Down, is based on fact. Plot lines are laid down according to patriotism, politics or some emotional reaction to them.

For these reasons I was skeptical when I went to see Black Hawk Down. Once again, the white hats win out in this film, as the outnumbered U.S. soldiers fight to save each other. Viewers do not see unseemly events leading up to the ill-fated mission, such as the attack on July 12, 1993, when American helicopter gunships fired 16 missiles into a Mogadishu house to disrupt a meeting of local African war lords and leaders.

The operation commander of the Mogadishu mission, General William F. Garrison, presides over a high-tech command center about three miles from the hard fighting. But his men suffer in part because of poor intelligence. They face unsurprised, organized and heavily armed opponents who resist removal of the warlords. Amid the chaos, an American rescue convoy becomes lost in the streets and alleyways of Mogadishu. During the actual operation, four or five helicopters were disabled, and two were forced down in enemy territory.

As I’ve watched helicopter operations for the past 35 years, I’ve never understood the way they are used — in real wars or the films that emulate them. Vulnerable machines with hundreds of moving parts, they can be disabled by a 15-year-old with an AK-47 assault rifle. Why we think we can transport troops into zones with hundreds of armed enemy militia waiting for them is beyond me.

Just days ago, the vulnerability of helicopters was demonstrated, once again, in Afghanistan. A U.S. serviceman was unwittingly abandoned by his crew deep in enemy territory when his Chinook helicopter made a rushed takeoff after being hit by rocket-propelled grenades — the same weapon that brought down the two Black Hawks in Somalia. A rescue mission was launched immediately, but it went badly wrong, Reuters reported. A second helicopter was hit and forced down during a fierce 18-hour firefight, and six more Americans were lost.

Paul Newman famously said in the film Cool Hand Luke, “What we have here is a failure to communicate.” Compared to that enduring human weakness, the crashing of helicopters is not only the senseless epicenter of Black Hawk Down, it is the all-too-common result of quick-fix thinking. Nowadays, when diplomacy breaks down, we resort to high-tech tools with limited capabilities.

As for the film, I’m left with doubts. But that’s less important than the fact that a movie does not and cannot give a complete, lasting sense of war. It is a passive, 140-minute experience from the comfort of a soft chair. In this respect war movies — and their attendant culture, including video games — are false advertising. As gruesome entertainment, Black Hawk Down succeeds; as ultimate truth, it fails.