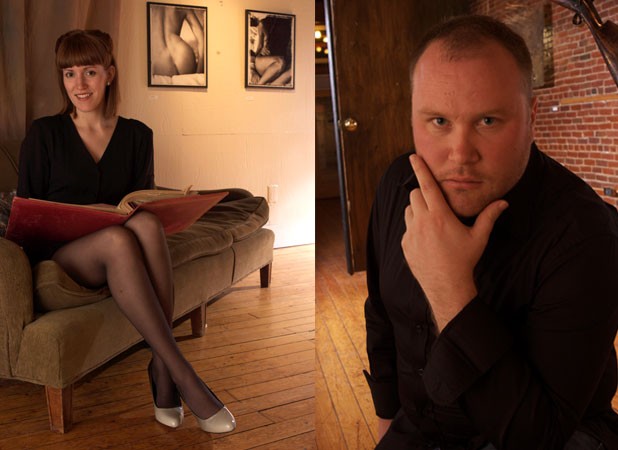 Apart from its location on the Church Street Marketplace, what stands out most about Designhaus is the spelling of its name.

That came about, Angie Lizotte explains, because she and cofounder Jason Robinson have this jokey thing of talking to each other in German accents. And “Designhaus” somehow seemed like a way of “lampooning the pretentiousness of high art,” Robinson adds.

Secondarily, Lizotte notes, the name is meant as an homage to Bauhaus, the school/workshop/gallery/performance space that operated in Germany from 1919 until 1933, when it was shut down by the Nazis. The 700-square-foot skylit space on the second floor of 22 Church Street likewise serves as a studio and classroom as well as a venue for visual-arts shows, private parties and Morris dancing.

Because Lizotte, 26, and Robinson, 34, have both been taking pictures most of their lives, Designhaus is mostly about photography. Robinson owns LeZot Camera Sales, a few steps south on Church Street’s top block, while Lizotte is the daughter of the store’s founder, Vinny Lizotte, who still runs its repair business. Robinson displayed photo portraits of his family at Designhaus last month; Lizotte’s architectural shots will hang there next month. Right now there’s an exhibit of old cameras along with antique photos from Angie Lizotte’s private collection.

The pair is also thinking of offering candid, and controversial, cameraman Dan Scott — who was the subject of a recent Seven Days article — a chance to show a selection of the snapshots that irked some of his subjects and got him grilled by Burlington police. Not to mention banned from 67 businesses on the Marketplace for a year. “I get what he’s doing,” Robinson says of Scott’s sometimes in-your-face street style. “A camera can be confrontational without being personal.”

To qualify for a show at Designhaus, artists “have to be serious and passionate about what they’re doing and what they want their work to be,” Robinson remarks. Lizotte suggests another criterion: “We want to look at things that make us happy.”

When it’s not in gallery mode, Designhaus functions as a studio for Lizotte, Robinson and a few associate members who pay a monthly fee to use the lights and camera equipment that also serve as teaching tools for group and private lessons. Photographers can pay a day rate as well.

The Designhaus duo has discovered, however, that there’s a downside to this rental arrangement: They’re sometimes left with a mess to clean up.

“Not everyone loves this place as much as we do,” Robinson says ruefully. As the father of a 5-year-old daughter and 7-year-old son, he has found that establishing and running Designhaus “is like having a baby.” It takes much more time than initially imagined, and “it’s not all cooing and goo-gooing,” Robinson observes. “There’s a lot of diaper changing, too.”

Having a baby and working at Designhaus proved an incompatible combination in the case of Andy Duback, a freelance photographer (and Seven Days contributor) who launched the venture nearly two years ago with Lizotte and Robinson. He still comes by regularly, however, and his skis remain stored in a crammed enclosure at the rear of the brick-walled atelier.

A stream of sweat equity was needed to transform the once-vacant space that had festered in neglect, Robinson says. “It was gross,” he recalls. “The place smelled, it had an ant issue, and the carpet was really nasty.”

Today, “It’s not exactly a New York gallery, but it is pretty homey,” Robinson says with pride, perched on a bar stool in a corner where hors d’oeuvres are laid out for First Friday Art Walk visitors.

Designhaus gets plenty of them; its spot on the Marketplace attracts the foot traffic that farther-afield galleries lack, notes Michael Heeney, a photographer who had a well-attended show at Designhaus last year.

An improvisational impulse could alter the venue’s current uses, Lizotte cautions. “It’s an ever-changing space that’s shifting itself,” she says. “I’m along for whatever it’s going to become."