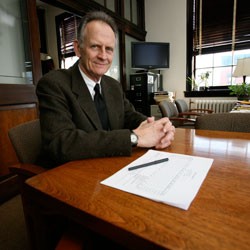 It’s been 30 years since Bernie Sanders upended the two-party system in Vermont’s largest city. Five years ago, Bob Kiss inherited the leadership of the Progressive insurgency Sanders inspired. Now, America’s most successful third party may be collapsing under the weight of a mayoralty that even many Progressives view as a failure.

The Burlington Telecom debacle — in which $17 million was improperly siphoned from the city’s cash pool to the utility — has demoralized younger as well as veteran members of the movement. The BT controversy, along with the city’s new Kiss-approved partnership with defense manufacturer Lockheed Martin, has filled them with fear for their party’s future. Meanwhile, voter ire over the Kiss administration’s mismanagement of BT and its related mishandling of city funds has pushed the Progs back to their smallest city council minority since the early ’80s.

“The brand is tarnished,” says state Rep. Chris Pearson of Burlington, the leader of the Progressives’ five-member Vermont House contingent. “We had built up trust with a sense of competency that people are now questioning.”

Even in the Progs’ Old North End heartland, the “brand” has come to be seen as potentially poisonous. Vince Brennan, one of the party’s two remaining city councilors, omitted the “Progressive” tag from the familiar maroon-and-white campaign signs his reelection workers stabbed into North Street snowbanks last month.

Some Progs do offer assurance that the party will rise again. Terry Bouricius, elected to the city council at the time of Sanders’ historic victory in 1981, points out that Burlington Democrats were also once reduced to a two-member council rump, “but they came back.” Contending that its principles remain relevant to the city, state and country, Bouricius predicts the Progressive Party “will be around for many decades to come.”

Party stalwarts talk up what they regard as positive aspects of Kiss’ record. But their silence is also eloquent. Not one of nearly a dozen Progressives interviewed by Seven Days calls for Kiss to seek a third term next year. Most say he is highly unlikely to be the party’s nominee, even though Kiss himself refuses to rule out a run for reelection.

Whatever good he may have done in the past five years has been negated in the public mind by the political damage Kiss has inflicted on himself and on his party, many Progressives say.

“BT has sucked all the oxygen out of the room,” laments Emma Mulvaney-Stanak, the other remaining Prog councilor. Pearson sees “BT’s shadow hanging over everything. It’s eclipsed a lot of the good things we’ve done.” To Brennan, the problems pummeling Burlington Telecom have produced “a black eye for Bob.” And while Brennan argues that Democrats and Republicans on the city council also deserve some of the blame, he concedes that “the black eye has extended to the [Progressive] party itself.”

Progressives seem to view Kiss, 63, as the political equivalent of an embarrassing uncle. They refer to him in fond personal terms and voice respect for his values, but they clearly would rather not be associated with someone who has brought disgrace to the family.

Even a few political foes admit they admire Kiss’ personal qualities. “Bob is a nice man who I do like personally,” says Republican Councilor Kurt Wright, who narrowly lost the 2009 mayoral race under an instant-runoff voting system that his supporters subsequently succeeded in repealing.

But Wright echoes many Progs in his negative review of Kiss’ political chops. “I don’t view him as what a mayor should be — as someone who’s truly a leader of the city,” Wright says. “He’s pretty much just a supporting actor” in the effort to salvage BT, Wright adds, suggesting, “In some ways the worst thing he’s done is not to own up to the mistakes he’s made.”

In an hourlong interview last week in his corner office in city hall, Kiss sought to defend his overall record, saying in regard to Burlington Telecom, “Things don’t always move forward in a straight line. I can’t apologize for that. I certainly won’t apologize for it.”

Occasionally consulting handwritten notes on a yellow legal pad, Kiss reached back to his first term when asked to list some successes. He recalled that he had managed to win city council approval, on a partisan 8-6 vote, for the sale of 179 acres of city land to the Intervale Foundation, which will reserve it solely for agricultural uses. The mayor also highlighted the enactment of a stormwater ordinance in 2008.

His self-defense is centered, however, on his fiscal stewardship. Kiss says his prudent management of the city’s finances and the municipal workforce has spared residents from an increase in general-fund property taxes for the past seven years. It’s an achievement that draws grudging acknowledgment from city council president Bill Keogh, a Democrat. “Yes,” Keogh says, “I suppose he has kept taxes down.”

Kiss notes, too, that the city’s general-fund reserve, which contained $75,000 when he took office, now holds more than $5 million. And he emphasizes that Burlington has remained one of the nation’s most economically dynamic cities throughout a financial crisis that has killed off the livelihoods of millions of Americans.

In Bouricius’ judgment, Kiss is “a well-meaning, competent person who has done a pretty good job of administering the city.” But, Bouricius adds, “He’s not a good politician. He has no interest in trying to spin things or to create charisma.” Kiss “would be more suited to the role of city manager than mayor,” says his ally of more than three decades.

Less empathetic observers have trouble viewing Kiss as a cautious custodian of the city’s treasury — even apart from the BT disaster. Democratic Councilor Joan Shannon, for example, cites the irony of Kiss’ having bolstered the city’s reserves mainly in order to secure a favorable credit rating. The Moody’s monitoring agency has actually downgraded Burlington’s bonds from a high rating to a medium investment grade because of BT, Shannon points out. She also describes the $50 million shortfall in the city employees’ retirement fund as “an even bigger problem than BT.”

In addition to criticisms of his competence, the mayor is seen by some as a “disengaged” figure (Wright’s word) who wears political blinders. “Ronald Reagan may have been ‘the great communicator,’ but Bob Kiss is ‘the great alienator,’” Shannon says. “He lost a lot of his base because of BT, and now he’s managed to alienate the peace movement.”

Shannon is referring to the letter of agreement the mayor signed late last year with Lockheed Martin, the nation’s leading weapons merchant, to help develop climate-change initiatives in Burlington. That move has left a sour taste with Jonathan Leavitt, a 32-year-old Progressive and community organizer who came within 10 votes of winning a city council seat last year. “There’s a real level of disappointment and indignation from the grassroots” over Kiss’ deal with Lockheed, Leavitt says.

One longtime observer of Burlington politics likens the mayor’s leadership style to that of “a Native American elder” who listens stonily to lower-ranking members of the tribe and then hands down his decision. Keogh sees this distancing not as a mark of dignity but as a symptom of isolation. “Who are his advisers?” the council chief wonders. [Mayoral aide] Joe Reinert? [Chief Administrative Officer] Jonathan Leopold? I don’t even know. There’s no way of telling.”

Proto-Progs who advised Sanders during his first tumultuous years in city hall complain that Kiss seldom consults with them. And when he does, these old Sanderistas sigh, their recommendations go unheeded.

Others view Kiss as an essentially passive personality, noting that he seldom speaks out on issues, nor does he offer innovative ideas in the manner of his magnetic predecessors. “There’s nobody more opposite to Bernie Sanders,” Bouricius comments.

Kiss’ own explanation for his sphinxlike affect calls to mind Popeye the Sailor’s refrain: “I yam what I yam.” Flamboyance and fist pounding, Kiss says, “is not what I look for in a mayor.” It’s more important to be effective than inspiring, he implies, insisting, “I do have a public projection. People I talk to on the streets do have confidence in my leadership skills.” Kiss notes that he has lost none of his five races for public office (three for the Vermont House).

Asked if he actually likes his job, the mayor declares he does, saying he derives “a lot of pleasure from the process of meeting” with constituents and city officials. And no one doubts Kiss’ commitment to economic and social justice. “All my life,” he points out, “I’ve been involved with antipoverty issues.”

As for the Progressive Party, Kiss assures that it’s “durable.” And he might just be right.

Premature Prog obituaries have been published in the past, only to be invalidated by the party’s resilience — never more amazingly than when Kiss himself stunned prognosticators by riding in from nowhere to vanquish the Democrats in a 2006 election they were sure they would win.

For 2012, the Progs’ bench may not be deep, but it does boast one hot prospect: state Sen. Tim Ashe, a clever young pol who has turned heads in Montpelier after building a local rep by winning three elections to the Burlington City Council. Kurt Wright, likely to be a strong GOP mayoral contender next year, says he understands why many Progs look to Ashe as their great hope for holding onto city hall, against all odds. But Wright observes that Ashe’s Progressive/Democrat-fusion approach may not play well in Burlington, where, the Republican notes, Ashe may be viewed as a Prog in Dem disguise.

Ashe, on vacation this week, was unavailable for comment.

The Progressives’ future may depend, however, not so much on stars like Ashe but on uncelebrated activists such as Abigail Russell.

Recently chosen as the party’s Burlington chair, Russell says she was drawn to Prog-style politics because she “felt empowered by what the city government has done.” A single mother at age 18, Russell, now 34, recalls that it was city-supported human-service agencies that “made it possible for me to get my footing, to become a good mom.” She works now as a “community builder” for the Northgate Residents’ Ownership Corporation.

“The party will have a resurgence,” Russell declares. “There are still a lot of people — young people, too — who believe in Progressive principles.”

Disclaimer: Sen. Tim Ashe is the domestic partner of Seven Days publisher and coeditor Paula Routly, who did not edit this story.