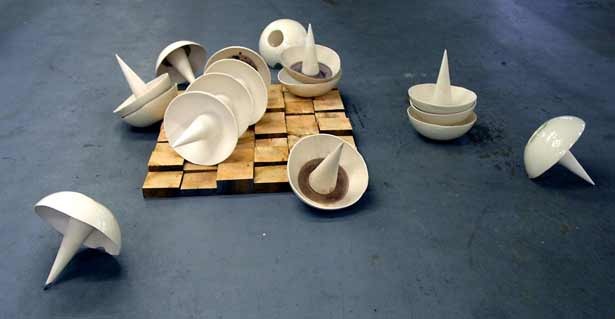 Art walks, fine-art festivals and open studios happen regularly in the Green Mountain State, but nothing is quite like Burlington's South End Art Hop. Its statistics are staggering: 500 participating artists exhibiting thousands of pieces; 86 indoor sites and dozens of outdoor locales; and an expected 40,000 visitors. This year marks the Art Hop's 15th, and its flagship show of 200 works under the same roof is perhaps the strongest yet. It's housed in the 9250-square-foot former Maynard Auto Parts building on Pine Street, and the entries large and small have expansive breathing space. Of the 200 pieces installed at Maynard's, 40 compose the juried show.

This year's juror Denise Markonish, a curator at the Massachusetts Museum of Modern Art, did an admirable job of selecting a broad range of artworks in all media. That couldn't have been easy - many of the submissions she did not pick for the juried show are close in quality to those that were.

In keeping with the grand scale of this year's Hop, the biggest of the large works is Christine Cole's 21-by-11-foot mixed-media drawing on paper and Mylar called "Surfacing in Fragments." Biomorphic features such as abstracted ears and a close-up nose appear on the mural-sized piece, defined by values of black and white. Large sheets of clear Mylar cover swaths of drawing in some places; in others, Cole has drawn directly on the Mylar in what appears to be graphite. It's a fluid, dynamic image with a spiritual aspect. Other monumental murals dominated by drawing, by Carleen Zimbalatti and Mallory Breiner, hang nearby and also shouldn't be missed.

Bryan O'Neill's "Borges' Library of Babel - Damaged Library, London, 1940" is a 24-by-32-inch inked Mylar piece. The title refers to a concept of Argentine author Jorge Luis Borges (1899-1986), who envisioned the universe as a vast, surreal "Library of Babel." With photographic realism, O'Neill melded a ghostlike library interior containing several men in 1940s-style attire with the ruins of a London library, apparently destroyed in the Blitz of World War II.

Realism and altered figuration are hallmarks of this year's juried show. John Anderson's 24-by-48-inch "Lamar Valley, Yellowstone" is a photo collage capturing a sparse landscape with slices of conjoined color photographs. The landscape's horizon becomes a slightly concave curve, while the edges of the image create an irregular, horizontally aligned, hard-edged shape.

Ann Labarge presents a photo-realistic female figure entwined in a crimson sheet and seated on a floral tapestry or bedspread. "Beauty . . ." is a roughly 36-by-60-inch, multi-paneled construction, with the figure and patterning painted on a four-ply layer of interlocking panels. The panels float over a golden background. The figure's face is obscured by her long, Rita Hayworth-style hairdo.

One of the selected prints depicts a male nude torso. "Broken Duality," by Chepe Cuadra, is a bi-colored monotype in black and sienna. It's a blotchy, expressive image in which the figure seems to be more of an object than an individual.

"Rim," by SUNY Plattsburgh sculpture and ceramics instructor Ali Della-Bitta, is an aggregation of 16 conical forms with upturned rims, like pointed sombreros, positioned on and around 48 6-by-6-inch wooden blocks of various heights. The quirky, original sculpture installation presents a rare combination of playful and minimal. The slip-cast cones, 14 inches in diameter, are glazed on just one side, and a ring of jam - as in preserves, such as strawberry and raspberry - stains the cones' inner surfaces. Della-Bitta creates subtle chromatic distinctions with those pigments from the pantry.

The "hop" in Art Hop connotes viewers going from one venue to another to take in as much artwork as possible. Previously it was more like a steeplechase, since many venues were open to the public only for the weekend. This year's event eliminates that challenge by extending many shows through the month of September. So now you can hop, jump, stomp or even crawl your way through the South End Art Hop to discover artworks worth lingering over - and maybe even buying.

This year marks the Art Hop's 15th, and its flagship show of 200 works under the same roof is perhaps the strongest yet.