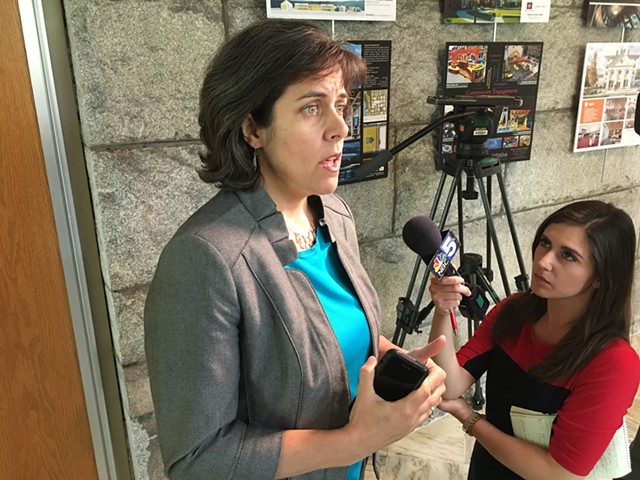 And so it continues.

Leaders in the Vermont House tried to override Gov. Phil Scott's latest budget veto on Tuesday but fell short of the necessary two-thirds margin by four votes. The final tally was 90 yes, 51 no. Minority Republicans maintained caucus discipline as their leadership convinced those who'd voted in favor of the budget to switch sides and back their governor.

It was a noble expression of loyalty. And it returns the whole process to square one, as a July 1 government shutdown gets ever closer.

There was a possible way out, but it would have required acting on a bit of creative thinking. The idea, in brief: Republicans could have allowed the override to happen by having some members of their caucus miss the vote — and then blamed Democrats for raising taxes.

"The concept of the override was mentioned, and without betraying confidences, there was sort of a lighthearted comment about, 'Maybe that would be the easiest,'" said Johnson after Tuesday's override attempt fell short. The idea was, she added, that "maybe a couple of hall passes or a golf game or two would help [Scott] out of a box."

Put plainly, if enough House Republicans had taken a well-timed walk during the vote, the veto would have been overridden. The crisis would have been averted, and Scott could have headed to the campaign trail blasting the Democrats as tax-lovin' extremists and portraying himself as the brave but doomed defender of taxpayers everywhere.

It didn't happen. Scott and his colleagues stuck to their scripts. And so we start yet again, this time on the other side of the Statehouse. Key Senate committees have begun fashioning yet another budget. Why this time will be different, no one seems to know.

What's clear is that each time we go through the cycle, tempers get shorter and rhetoric gets sharper. The two sides are playing the Blame Game to the hilt.

"They want to raise taxes," said Scott at a June 14 press conference. "It's hard to believe that we come to July 1 and shut down government to raise taxes. I can't understand that."

Ashe characterized Scott's approach as artificially holding down property tax rates this year, which would create "a huge hole in the education fund next year. And if it's this governor, he'll take the same position and we'll be in the same fight. We're normalizing what is a completely dysfunctional way of budgeting."

The pro tem floated the idea that a bigger agenda is in play. "For those who want to attack public education, this is exactly what they want: a sense of perpetual crisis," he said. "This is about blowing up the existing system and dramatically changing the way our communities send their kids to school."

Smells like campaign season. Caricatures and accusations fill the air, and visions of apocalypse are all around. And, of course, each side is accusing the other of putting politics ahead of the public good and depicting itself as the staunch defender of kids, taxpayers, baseball, Mom and apple pie.

'Nothing Short of a Prison'

How did you spend your Father's Day? U.S. Congressman Peter Welch (D-Vt.) went to the Mexican border to inspect immigrant detention facilities where federal authorities are holding children, separated from their mothers and fathers, in makeshift "processing centers."

"One center is called the Icebox, because it's very, very cold in there," said Welch after his tour. "It's a big warehouse building with no windows and a number of chain-link fence cages. These kids were sitting silently, just staring ahead blankly ... One of the most poignant things I saw were three boys, I assume brothers, just lying on a mattress together holding on to each other for dear life." Tales of his encounters practically poured out of him.

He was more concise in a Sunday evening tweet: "It is nothing short of a prison," he wrote.

"The Trump administration, in my view, is in violation of the International Treaty on Asylum," Welch told Seven Days. "Countries that are part of that accept the responsibility of at least hearing a request by a person for asylum." Instead, he added, would-be immigrants are being criminally charged for seeking asylum. Words like "appalling" and "despicable" escaped his lips.

Welch was part of a seven-member delegation — all Democrats, no Republicans.

"We are going to need Republicans to change this," he said. "That's the reality. I so wish I had some of my Republican colleagues with me there."

Experiencing the heartlessness, loss and separation up close makes it harder to turn a blind eye to the inhumanity that's being perpetrated in our name.

It's the number he cites for per-pupil school spending in Vermont — the highest in the nation by more than $2,000, and more than double the national average. It's a key line in his argument that public school costs are out of control. And the number comes from a reputable source: a National Education Association paper on school costs in the 2015-16 academic year.

But there's a problem. That NEA study seems to be an outlier. Other measures put Vermont closer to the pack.  For example, the U.S. Census Bureau's annual report for the same year has Vermont spending $17,873 per student, fifth in the nation.

What's the difference between the two reports? The NEA is undercounting the number of Vermont students whose education is publicly funded. A passage in its report reads: "Students who attend independent schools at public expense are not included in the student enrollment count."

That's a lot of kids — nearly 12,000, according to the Vermont Agency of Education. Its Budget Book for fiscal year 2017 (which listed 2016 pupil counts) reported 77,078 students enrolled in public K-12 schools. But the total number of "publicly funded students," including those in independent schools, was 88,854. That has a big impact on the NEA's per-pupil-spending number.

Brad James, the education finance manager for the state education agency, is probably the state government's most well-informed person on the matter. And he sees real limitations in these national studies. He noted that every state has its own budget, accounting process and way of arriving at a pupil count. A national outfit may be unaware of these differences and is likely to produce inaccurate numbers, he said.

Still, Vermont is well above the Census' national average of $11,762. Why?

Northeastern states dominate the top of the cost rankings. The Census puts New York in the top spot, Connecticut third, Vermont fifth, and Massachusetts, Rhode Island and New Hampshire in the top 10. Maine is in the teens. Vermont may be well above the national average, but it's not out of line in the region.

Looking at cost breakdowns in the Census report, it seems clear that the regional difference is due to better staff pay and benefits on a per-pupil basis. The Northeast pays its educators well. Vermont lays out nearly $15,000 in salaries and benefits per student, according to the Census. Oklahoma, for contrast, pays a mere $6,041.

Of course, Oklahoma just went through a statewide teacher walkout over grossly inadequate pay, so maybe that's not the model to emulate.

Maybe, in fact, offering educators a decent living pays off. Education Week grades the 50 states on three criteria: K-12 achievement, spending equity and preparation for careers. Vermont received the third-highest combined grade in the nation behind two other high-spending states, Massachusetts and New Jersey. And virtually all the top states in the ranking are big spenders.

You get what you pay for.

This is not to say that we don't have issues with the cost of public education. We have an infrastructure that's too big for current enrollment. We have demographic trends pointing to an ever-smaller student body.

But the governor does his credibility no good when he cherry-picks the worst possible number to make his case.

The six incumbent state senators from Chittenden County — Democrats Debbie Ingram, Ginny Lyons and Michael Sirotkin and Democrat/Progressives Tim Ashe, Phil Baruth and Chris Pearson — recently announced that they will run as a slate. "We work well together," said Ingram. "We'd like to keep doing our jobs."

Even without a slate, the six-seat district is a daunting prospect for a would-be challenger. Over the last five election cycles, from 2008 through 2016, district incumbents were reelected every time they ran. A newcomer was only able to break through when an incumbent retired or sought higher office.

"It's very challenging," said Valerie Carzello of South Burlington, a candidate in the Democratic primary. "It's OK, but a lot of people do feel left out." She's suffered a case of sticker shock over the cost of campaigning. (In 2016, three Democratic candidates spent $16,000, $37,000 and $50,000 and lost in the primary.) "I'll have to get out my glitter and poster board," she said.

Steve May, a Progressive from Richmond who's running in the Dem primary, is more circumspect. "I can't speak to what others do in their campaign," he said. "It's a name-recognition race, to be sure. I've been trying to raise my profile."

Alex Farrell of Burlington is an energetic young Republican hoping to break the Dem/Prog duopoly. "They vote in a bloc, for the most part," he said. "It makes sense that they would all run together. It plays into my message: We need another voice in Montpelier."

With all the magnanimity of a heavy favorite, Ingram closed with an ode to democracy. "We welcome the democratic process," she said. "We're happy to have a good, healthy debate."

That's nice. But the truth is, the Chittenden district is profoundly undemocratic. It's impossible — and I don't think that's too strong a word — for a newcomer to make up for the incumbents' advantage in name recognition and fundraising prowess. And when the incumbents team up, it's just the icing on their reelection cake.

This will be an issue after the 2020 Census, when legislative districts will be redrawn. Given the population trends, Chittenden is likely to add another Senate seat, perhaps even two. At that point, the district ought to be broken up into smaller, more accessible pieces.