Cartoonist Harry Bliss, whose work has graced the cover of the New Yorker, thinks there's too much shitty art in the world. "You can't contribute to that," he said. The Vermont- and New Hampshire-based artist, whose single-panel, adult-oriented cartoon appears weekly in Seven Days, is also known for illustrating children's books. Regardless of what he puts out, says Bliss, 54, it has to pass the self-created "Bliss test": Is it good? Is it funny? Is it profound?

His new collaboration with Kate DiCamillo, the acclaimed author of books for young readers such as Because of Winn-Dixie, passes with flying colors. Presented in a graphic novel format, Good Rosie! is the story of a shy, lonely dog who doesn't know how to make friends with the other pups at the park.

"All of Harry's warmth and charm come out in his art, especially about dogs," gushed Elizabeth Bluemle, owner of the Flying Pig Bookstore in Shelburne, who knows both creators personally. Her store and publisher Candlewick Press are cosponsoring an event on Sunday, September 23, that will bring Bliss and DiCamillo to Burlington's Main Street Landing Film House to talk about Good Rosie!

"[DiCamillo] manages to be deceptively simple," Bluemle went on. "Her writing style has so much depth, compassion and humor."

Minnesota-based DiCamillo won the John Newbery Medal in 2004 for The Tale of Despereaux: Being the Story of a Mouse, a Princess, Some Soup, and a Spool of Thread and in 2014 for Flora & Ulysses: The Illuminated Adventures. The award recognizes distinguished contributions to American literature for children.

The writer and Bliss first teamed up a decade ago on Louise, the Adventures of a Chicken, published by HarperCollins. The two have a similar sensibility when it comes to the language of picture books, said Bliss — wanting to create something profound for kids as opposed to mere entertainment. Beyond presenting the chicken's adorable and funny antics, the book raises the question of what a home is.

They also share a deep affection for dogs and always wanted to collaborate on a canine-related book, he noted. Years went by until, one day, Bliss received the manuscript for Good Rosie!

"I think there's a deep understanding when you look into a dog's eyes and you really pay attention to an animal," said the cartoonist.

DiCamillo's books have a sense of humanity that resonates for readers of all ages, he added. Readers of Good Rosie! will remember times when they took the risk of opening themselves up to new people, making friends with those who might not like them back, and looking past first impressions.

"It's probably one of my best books," said Bliss.

Also a fine artist, the New York native comes from a family of painters. He divides his time between Burlington and rural Cornish, N.H., where he bought the former home of The Catcher in the Rye author J. D. Salinger two years ago. To get to the house, one has to drive a mile and a half down a winding dirt road.

"I basically live under a rock in New Hampshire, so I don't get to see people very much," said Bliss. 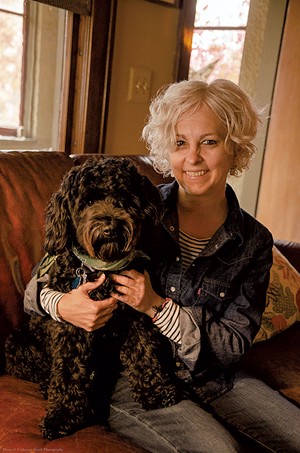 For the third consecutive year, he's partnering with the Center for Cartoon Studies in White River Junction to offer a one-month residency program at his home. Bliss, one of two recipients of the 2014 Maurice Sendak Fellowship, is a former board member of the cartoon school.

These days, when he's not working on his cartoons or new picture books, Bliss said, he's really digging the New Yorker. He used to sporadically read the magazine in which his work appears, he confessed, but a recent article on termites knocked him out.

Reading about topics that have nothing to do with art helps expand his mind and is a crucial part of his creative process, Bliss explained. "We're in our creative moment the culmination of everything that we've experienced in our lives," he said. "And, ideally, at that moment of creativity when you're putting pen to paper, you want to have access to that information."

When that happens, he said with dramatic flair, "It's bliss!"

Local fans will have to wait to see if termites make it into Bliss' next work. In the meantime, they'll have the chance to meet him and DiCamillo this week.

The Flying Pig usually holds its readings at the Shelburne Town Hall, which can accommodate up to 45 people, said Bluemle, but that space is currently under renovation. The Film House has capacity for about 220 people, and Bluemle is expecting a large turnout.

"[It'll be] a fun afternoon with two artists at the height of their creative powers, selling wonderful warm stories," she said. The event is open to all ages, and educators and librarians will be among the guests.

Bliss enjoys doing book signings and interacting with young readers. "It was important to me growing up, hearing other authors talk and meeting people [who] inspire you," he said.

"I never get sick of it, never," Bliss added. "Because I know I'm going to go back under my rock."