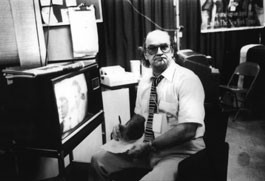 Every morning over breakfast, my father would read The New York Times. Then he would leave the paper on the table for my mother, and on his way to the bus, buy a second copy to read during the 45-minute commute from our home in New Jersey to New York City. Then all day long at the office, he would work at putting out the next day’s edition. He worked at the Times from 1958 until 1991 — for all but about 10 of those years as assistant national news editor, with responsibilities for political coverage.

During my summers home from college, I lived with my parents and took the bus with my father to a job I had in the city. I loved those cool Montclair mornings, waiting with Daddy and then climbing aboard the tall DeCamp bus and finding our seats side by side. Sometimes we chatted a little, but mostly we just read — him neatly folding back the pages of his paper, me losing myself in some novel. I loved our quiet companionship and the sense of adult importance as we and the other commuters disembarked at the Port Authority and marched purposefully out onto Eighth Avenue.

My father and I didn’t have a lot in common. Unlike my brother, I wasn’t planning a career in journalism and I couldn’t have cared less about the Yankees. Nor had I inherited my father’s brilliant mind, or even his dark complexion, the way my sisters had. Sharing those summer commutes was the closest my father and I had ever been. He died eight years ago. But coming to work at Seven Days as assistant editor — a title that sounds so similar to his — has made me feel close to him again.

Granted, there are certain differences between The New York Times and Seven Days. They have an international fleet of correspondents. We cover northern and central Vermont, with two staff writers, a handful of columnists and a short list of freelancers. They have TV listings and publish “all the news that’s fit to print.” We have comics and the occasional four-letter word. In spite of these differences, when I’m sitting here at my new desk checking facts or asking a writer to clarify a detail, I can’t help but feel as if my father is peering over my shoulder. Sometimes I imagine him smiling with pride. But just as often, his look feels more critical.

Irv Horowitz was not a man who suffered fools gladly. In synagogue, when the rabbi’s sermon slipped into cliché, my father would signal his embarrassment by removing his glasses and burying his face in his hands. He brought his editor’s ear home to our dinner table, complaining, say, when one of us used an ambiguous pronoun — not because he didn’t know what we meant, but because he couldn’t abide sloppy language. And if — God forbid — one of his children betrayed ignorance about some current event, he would storm, “You’ve got to read the paper!”

At work, he could be even more gruff. Once he confessed to my mother that he’d snapped at a young reporter, reducing her to tears. He snapped at me plenty, too, especially when I made the mistake of calling him at work just before deadline time.

My father spent his days gathering information from reporters all over the country. After negotiating length and immersing himself in the facts of each story, he would convey their essentials to the editors who determined which piece belonged where and what size headline each deserved. As 5 o’clock approached, he would kick his chair, which was on rollers, over to the Night Desk to tell the people there what to expect after he went home. This mission would so absorb him that more than once, we’ve been told, he sideswiped some wandering superior.

It’s easy to picture my father being oblivious to a passing VIP. At home, he scorched tabletops with his neglected cigarettes and could hardly change a light bulb. Evenings in front of the television, when my mother would ask — no, instruct — him to fetch her a Diet Pepsi, he would walk dutifully off to the kitchen, where the ice cubes would inevitably slip through his fingers and skid across the floor. Out in the living room, we would hear him self-scolding, “Stupid, stupid, stupid!” My mother once surprised him by converting the bedroom next to theirs into a pool room. She spent weeks having the walls painted, installing new lights and moving in the enormous table. He never suspected a thing.

On the other hand, it’s virtually impossible to imagine my father ever forgetting a detail. His encyclopedic brain seemed to hold every national story the paper had run during his tenure — and not just its contents, but also its location and the size of its headline. He could summon at will the minutiae of American politics: the name of the losing candidate for governor of Massachusetts in 1960 or the percentage of votes Thomas E. Dewey received in 1944.

This expertise wasn’t always welcome. On Sundays, pen in hand, he would make short work of the Times crossword puzzle. Then, while my mother and I collaborated — using a pencil with a good eraser — on a second copy of the puzzle, he would sit watching his ballgame, keeping one ear on our deliberations so that he could call out corrections.

On a more personal level, my father had an uncanny fascination with — and remarkable memory for — the details of other people’s lives. Like the reporter he’d been at the start of his career, he was constantly interviewing. Within five minutes he could ascertain where someone was born, who his family was and where they lived, where and when he’d gone to school, past and present employment. My father’s questions didn’t come across as prying, just interest. People were floored when years later he’d ask, say, “Is your brother still living in New Haven?”

With the bureau chiefs, reporters and stringers whose stories he managed, his personal attention translated into long-lasting friendships. When our family traveled — Arkansas, California, Hawaii — we touched base with local hosts whose bylines we’d read for years. Wherever I lived, after I left home, he made sure I had the phone number of some surrogate guardian I could seek out in case of emergency. Though he broke things and bumbled around the house, as an editor my father was a force: exacting, all-knowing and inescapable.

He was so intensely identified with his job that it was hard, while he was working, to imagine him doing anything else. My mother worried aloud that unless he found something to engage him after he retired, he would simply waste away. When that day finally came, he didn’t join a bridge club or learn to cook or drag his old golf clubs down from the attic. He did continue to read the Times from cover to cover, but only once a day.

He spent more time watching sports on TV and listening to tapes of old standards. For a while, on doctor’s orders, he took a slow walk down the block each day. While my mother was still working, he regularly accompanied her to her school library, where he worked as a volunteer and made friends with the teachers. Relieved of his responsibilities at the newspaper, my father grew quieter, calmer and less quick to judge.

The spring before he died, my parents drove to Vermont together for the last time. Both had health problems, and though it wasn’t obvious whose prognosis was worse, the visit had a definite sense — to me, at least — of an ending. We lingered at the table after lunch, listening to my father’s new tape of Louis Armstrong singing “What a Wonderful World.” Then my father and I took a slow walk to the lake. It felt as if we should be saying something important. But neither of us could think of what.

After a long, awkward silence, he finally asked, “This has worked out for you, hasn’t it? You’re happy with your life here?” He phrased it as a question, but it felt like a blessing.

In my mind, that moment is conflated with another, 18 years earlier, when he was still in the thick of his job: It’s a beautiful June morning, the air fresh and clean from last night’s rain. The rhododendrons are in bloom. My father and I are standing at the foot of the back steps, waiting for my mother to back the car out of the garage and drive us to the bus that will carry us to our separate offices. As contented and relaxed as I have ever seen him, Daddy smiles at me and quotes, “What is so rare as a day in June?”

I have heard this line of poetry countless times. But this morning I hear it differently. It expresses not just my father’s utter approval of the day and the rhododendrons, but also of me.

It’s a good moment to remember, these days. Especially when I find myself stressed out and snapping, struggling to meet the deadline — all the while editing myself.