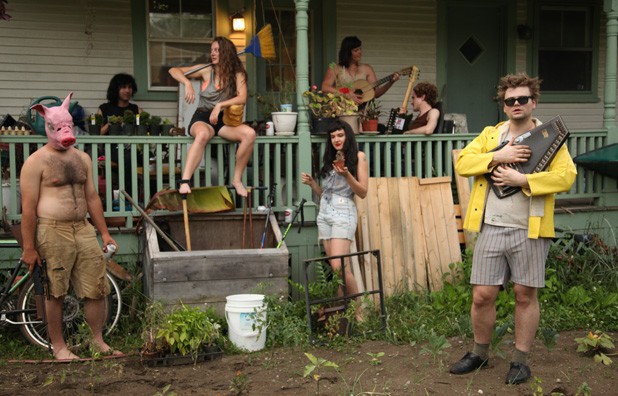 There has gotta be something in the water in Brattleboro. Or maybe it’s in the bedrock. How else to explain the seemingly endless strain of unusual sounds, and equally unusual bands, emerging from the small southern Vermont town?

Following the lead of artists such as King Tuff, Feathers, Ruth Garbus, Chris and Kurt Weisman and others, Happy Jawbone Family Band are the latest Brattleboro-based act to draw national attention. The group originally came together at the Jack Kerouac School of Disembodied Poetics, a sub-college of Naropa University in Boulder, Colo. In 2008, front man Luke Csehak relocated to Brattleboro with his wife and bandmate, Elspeth Bourne-Kebbell-Csehak. They would soon be joined by Francis Carr, forming the core of the band as it exists now and adding to Brattleboro’s unlikely bounty of oddball musical riches.

Songs such as the offbeat “Stay-at-Home Soldier” from Happy Jawbone’s new, self-titled record for Brooklyn label Mexican Summer have been drawing raves from media outlets large and small, including heavy hitters such as Spin and Pitchfork. And deservedly so. The album is by turns funny, strange and melancholy, a queerly compelling slice of pop that honors the band’s lo-fi roots while presenting its gleefully unconventional aesthetic. Think Camper Van Betthoven on a schoolyard playground, in a sonically immaculate package.

In advance of the band’s show at ArtsRiot with Boston’s Quilt on Tuesday, November 11, Seven Days caught up with Luke Csehak by phone from home in Brattleboro.

SEVEN DAYS: What did you study at the Jack Kerouac School of Disembodied Poetics?

SD: Right. And what does that entail, exactly?

LC: It’s really more embodied poetics, to tell you the truth. It’s just a name. It’s a, how do you say, alternative writing school. You learn crazy techniques, read more obscure writers than at a more conventional writing college. It’s a really interesting place. It’s a little bit like Hogwarts.

SD: Do you use the things you learned there in your writing with Happy Jawbone?

LC: Yeah. I think of rock and roll as an extension of my writing. It’s a more satisfying way to write. It’s easier to get people to listen to you. It’s like writing-plus.

SD: How did you find the process of going from home recording to more professional recording?

LC: It got more people involved. The other way, me and Francis [Carr] were the artistic overlords. But there was more outside input this way. The label wasn’t heavy-handed, but they let us know which songs they liked and which direction they thought we should go in, in a very supportive way. There are no guns involved or anything. It took a lot of pressure off me. I just sang and played guitar. A lot of fucking guitar. It felt good.

SD: I did notice there was more guitar on this record.

SD: Tell me a little about your musical background.

LC: I grew up playing the euphonium — it’s like a little tuba. I thought I was going to be a classical euphonium player. But then I grew up a little bit and realized it’s a sort of silly dream to chase after. So I spent more time with rock-and-roll music, one thing led to another, and my life was ruined.

SD: How would you characterize your writing style?

LC: I think that stuff is funny. I have some joke answers if you want to hear them.

I was hanging out with some punks the other day. And I was, like, “Shit, man, these guys will never like me.” I’d have to try so hard to be their friends and it would never happen. It made me a little bit sad.

LC: It is. You hear of Johnny Ramone being politically conservative, which seems crazy. You think of punk as being this liberal tradition. But it’s come to be really conservative. There’s something cool about that, too. Sort of like folk music. I like to think of punk as futurist folk music. And they both suffer from some of the same faults, where they’re just sort of boring sometimes.

SD: That’s not a problem with your music. Do you go out of your way to find unconventional angles?

LC: It’s more that it has to keep me interested. I was reading about psycho-acoustics, the study of how we interpret sound. And they were saying that there is this nexus of interpretation of songs, where we enjoy a song because the notes go in an order that we expect them to. But we also enjoy it when it doesn’t quite do that. So there are two different sets of pressures that are opposite. And I realized that’s totally my songwriting process. I’m not trying to make things unconventional. I’m trying to make something that touches somebody. But also, I don’t want to bore anybody. So I find myself going between those poles. You want to make something that’s relevant to people, but also not something that’s boring.

SD: Brattleboro is sort of an epicenter for weird pop music. I know there are some theories about why that is. What’s your favorite?

LC: There are a few theories. The most interesting theory, and the one I subscribe to, is that the bedrock of Brattleboro is made of quartz crystal. That’s a geological fact. So the theory is that the crystal attracts a certain type of energy. I guess crystals hold energy, and it slowly radiates out. I don’t know much about crystals, which means I don’t know much about this theory. But I like it. And you can see it happen. People move to Brattleboro and stay for a season, then they move. But they all come back. It’s a little bit like “Twin Peaks,” Brattleboro.