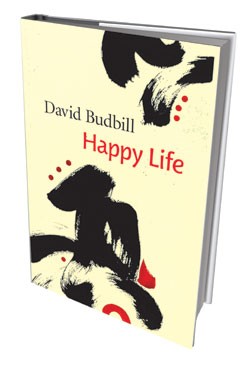 How many poets would you believe if they titled a collection of personal lyrics Happy Life? Not many, perhaps, but you can believe David Budbill. The title of the Wolcott resident’s third collection is no ironic mask for verses of the angst and fretting we’ve come to associate with modern poets. Nor is it a naïve denial that angst and fretting happen.

We learn this in the volume’s first poem, a riff on a ninth-century work by poet Chia Tao, who pitied a bureaucrat for the days he spent pent up in his office (“Chia Tao Begins a Poem to Subprefect Li K’uo of Hu County by Saying”). “I’ve spent most of my life/ pissing and moaning about/ never having any money...” writes Budbill, speaking for noncelebrity poets both then and now. “And yet,/ for more than forty years/ my days have been my own.” The poem’s last lines: “It takes a long time for some people/ to realize how lucky they are.”

There’s a wryness to that final turn, suggestive of the last panel of an indie comic. The grass is always greener, we’ve learned: The subprefect has his wealth and renown, but the poet has his “days” at his disposal. Unlike many a Christian or stoic-minded writer, Budbill doesn’t end the poem with a pious exhortation not to envy our neighbor’s lush backyard. Our happiness, he simply suggests, isn’t always obvious to us.

Maybe that’s because we imagine it as the satisfaction of all our desires, a condition in which there’s nothing left to want. Or we yearn for a nirvana where desires don’t exist. Good luck with that, suggests Budbill, whose poems periodically celebrate the sorts of worldly urges that sages — Buddhist and Western alike — are supposed to shun: lust, gluttony, careerism. “I would rather be/ trapped here, consumed by lust, than be a ghost at peace,” he writes in “Not a Ghost at Peace.”

Yet, even as Budbill affirms our insatiable drives for “Sex and Ambition” (another poem title), he shows that happiness has little to do with their fulfillment. Joy sneaks up on us in homely forms: the light of the white pine grove. The serviceable woodstove and wheelbarrow. (Budbill writes odes to both.) The hearty Sunday breakfast. In his lyrics, the foreground drama of a wanting, suffering, all-too-human life fades into the far more vivid background of everyday seasonal routines and pleasures. And these, Budbill suggests, are the true happiness.

No wonder the poet has become so tightly associated with the Vermont landscape where he’s lived for 40 years. Not only does Budbill return over and over to images of his home life and outdoor work, but his ethos — happiness is about quality of life, not hitting marks or amassing treasure — dovetails perfectly with what we’ve come to call the Vermont “brand.” (Come to our state! Slow down! Tend your garden!) A few of the poems in Happy Life wouldn’t be out of place on a tourism board website, such as “Sunday Morning,” in which Budbill enumerates the locally sourced components of his brunch (“home-cured, applewood-smoked, slab bacon”; “cage-free organic eggs”).

But Budbill isn’t selling the state, or anything else. And anyone who views his poems as glamorizing a rural lifestyle isn’t really reading lyrics such as “Into the Winter Woods” — which notes the beauty of a winter morning in passing, but is mainly about how to use a chainsaw.

Yes, these poems are laid out as a seasonal cycle; the volume begins and ends with the onset of fall. But Budbill’s style — deliberately plain, relentlessly concise and concrete — has no truck with the standard tropes and enticements of Western nature poetry. Nature, for him, is the teacher who “never says a word” (“My Teacher”).

We find out how you learn from a silent teacher in “Another Fall,” a poem Budbill starts with the sorts of images of fruitfulness and decay that traditionally introduce poets’ reflections on death. But, instead of making the heaping compost pile and turning leaves into metaphors for the autumn of his own life, Budbill lets them stay what they are. He asks, “When will my own turning toward death make me look/ ... only inward so that I/ can’t see what’s out there, beyond me, in this sweet world?” How does the poet know he’s still alive and kicking? Because he still perceives the world as more than a reflection of him. And that, too, is happiness.

Telling it like it is, in the simplest words available, is a dangerous strategy for the novice writer. But Budbill, who clearly learned that terseness from the Chinese hermit-poets he invokes, is a master of the flat-footed, faux-simpleton voice, the wit that punctures conceits of poets and philosophers alike. Discussing the “yang-yin” dissimilarity of country and city life in “Contrasts,” he writes: “The sages say it’s all the same./ I don’t know; they sure seem/ different to me.”

Indeed, they do seem different. Happy Life is full of contrasts — youth and age, Vermont and Manhattan, ambition and the hermitic life, winter and summer, solitude and community, happiness and dissatisfaction. Some of these pairs we can choose between — as Budbill has chosen his life on “Judevine Mountain” over the city — and others we can’t, and others we wouldn’t want to. Sometimes we just need to live both sides of a contradiction — welcoming guests when they come, feeling glad when they go (“September Visitors”).

And this embrace of seemingly incompatible happinesses, Budbill suggests in “Contrasts,” is one secret of the happy life that creeps up on us when we least expect it. “Each magnifies,/ is better with, the other.”

Just last week, or so it seems, the garden

And in its place: skin beginning to wrinkle,

stalks beginning to harden, everything

Little Poem Written at Five O’Clock in the Morning

All this violence: wars and cruelties —

carnage of all kinds,

back to the beginning of time.

Our kind endlessly slaughters itself;

our appetite for self-destruction is boundless.

Yet and still every day the sun rises,

white clouds roll across the sky,

vegetables get planted and grow,

and late in the afternoon someone

sits quietly with a cup of tea.

Every surface in the house covered

with tomatoes, a vat

of boiling water on the stove,

drop them in and wait for

cracks in their skins. Into cold water. Out.

Cut away the bad spots,

peel away the skin,

chop them up, drain them in a colander —

save the juice to drink —

dump them into the other

pot in which a mountain of garlic

has been simmering in olive oil:

Rose de Berne, all go in,