Hanging in There: Some Vermont Bats Are Adapting to White-Nose Syndrome 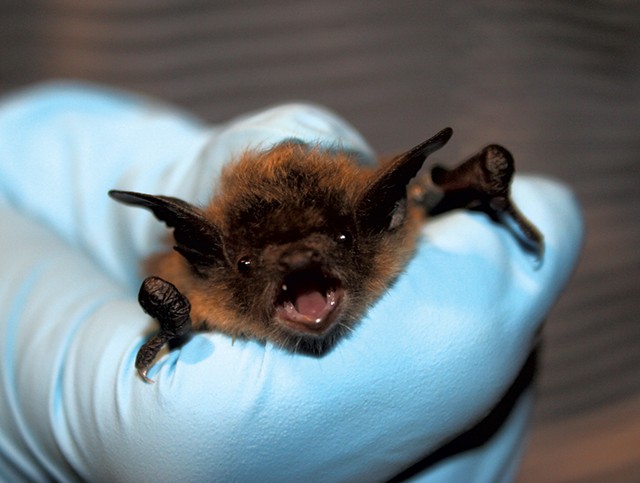 Little brown bats began to fly from wooden bat houses in groups of two and three as dusk fell in Cornwall on July 15. By the time the last one disappeared into the deepening darkness, Dylan O'Leary and his fellow volunteer bat monitors had tallied 362 of the small-winged creatures.

It was an attention-grabbing moment — and not just because the bats sometimes swooped directly toward the watchers, said O'Leary, who described the scene to Seven Days. The July count suggested that the population of little brown bats at the Cornwall Swamp Wildlife Management Area in Addison County has grown substantially, up from just 97 in 2012.

The tally added to a growing belief that Vermont's population of little brown bats, once one of the state's most common species, is bouncing back after the devastating impact of white-nose syndrome. The fungal disease has killed more than 6 million American bats since it was found inside a New York cave in the winter of 2006-07, according to the U.S. Geological Survey, which tracks the disease. Officials theorize that the fungus came from humans who visited white-nose-infected caves in Europe, where bats have adapted to the affliction.

In the wake of the massive U.S. die-off, the modest gains of the little brown bat are encouraging, said O'Leary, a conservation biologist who has volunteered in the Vermont Fish & Wildlife Department bat-monitoring program since 2016.

The sight of the winged mammals coming out at dusk is an impressive show of persistence and beauty, he said: "I find it, like, super peaceful and really just ... awe-inspiring.'' His conclusion? "Life is pretty resilient."

Bats could certainly use a break. In just a few years, roughly between 2008 and 2011, Vermont lost an estimated 75 to 90 percent of its two most common bat species, the little brown and the northern long-eared, according to a Vermont Fish & Wildlife study. It was a "massive, massive hit," said Alyssa Bennett, a small mammals biologist at Vermont Fish & Wildlife. "We were near the epicenter of the disease."

Both the little brown and northern long-eared, as well as a third species, the tricolored bat, were listed as endangered when white-nose syndrome turned the caves, mines, attics and other places where they overwinter into chiropteran graveyards.

In total, five of Vermont's nine bat species are currently listed as endangered or threatened.

But now, after years of bad news, there's a glimmer of hope, at least for the little brown bat. White-nose syndrome kills by disrupting bats' sleep cycle during winter hibernation, rousing the animals to move around and take flight. With no food available to replenish their energy stores, the bats starve or freeze to death outside their caves. Rebounding populations suggest some little brown bats can resist the frequent arousal pattern that kills other species, according to bat expert Bennett and other biologists.

The number of bats counted by volunteers at eight little brown bat colonies in Vermont increased from 1,421 in 2012 to 1,726 in 2017, according to Vermont Fish & Wildlife, and to 2,244 in 2018, although some of the data from that year appear to be unreliable, Bennett said.

It's difficult to count any form of wildlife, she cautioned, and bats are especially tricky because they are small and may emerge from multiple spots at roosting sites during the tally. Nevertheless, the numbers do suggest an encouraging trend, she said.

"What we're seeing is a stabilization," she said.

Another sign: While bats are still dying from white nose at the Aeolus Cave in Dorset, the largest bat cave in Vermont, the population there has not been entirely wiped out, as has happened at some other caves. An estimated 70,000 to 90,000 bats hibernate there in the winter, according to Bennett. Granted, that number is still much lower than it was before the disease struck — a study from the 1960s suggests there were 250,000 to 300,000 bats in the hibernaculum then, according to Bennett.

Reports of bats in human-made structures also continue to rise, another indicator of a possible comeback for certain species, including the little brown bat, which is attracted to houses and other buildings.

Between January 1 and December 31, 2017, Vermont Fish & Wildlife responded to 231 reports of bats in buildings, more than twice as many as in 2016. Last month the department received 30 reports, according to Bennett, who monitors all things bat-related for the state. 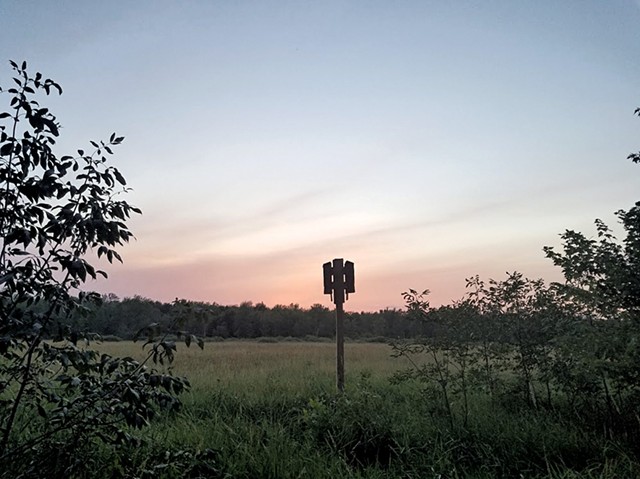 Some, but not all, of the callers sounded predictably panicked, Bennett pointed out. Fewer people now see the creatures as "vermin," and they want to evict them humanely, she said, attributing the change in attitude to publicity and education about bats' decline.

But it's still legal in Vermont to trap and kill even endangered bats under certain circumstances, because of the extremely small risk that they might carry rabies.

If a bat bites or scratches a human, for example, or is thought to have had contact with a sleeping infant or adult, it can be dispatched. As much as the state wants to protect bats, "we also want to make sure that we take seriously any human health concerns,'' Bennett said. Rabies, she pointed out, can be halted if an infected person is promptly vaccinated, but otherwise "it is fatal. So we take that seriously." (See sidebar.)

It would be wrong to assume all Vermont bats are making a comeback. They aren't.

"I think it's a pretty varied story," Bennett said.

Some species, such as the big brown bat, are doing just fine, she said, and little brown bats are "hanging in there." But the once-common northern long-eared bat has mostly disappeared from Vermont due to white-nose syndrome and does not seem to be recovering, Bennett said.

It's unclear whether these bats will ever return to the state. At least in Vermont, a couple of species appear to have "dropped off the face of the Earth,'' said UVM biology professor emeritus Bill Kilpatrick, who has studied Vermont bats for decades.

Vermont has three species of migratory bats that have been largely unaffected by white-nose syndrome because they are less likely to winter in caves; they instead head south to trees, wood piles and other spots in warmer climates.

But those silver-haired, hoary and Eastern red bats face challenges, too. Kilpatrick worries that Vermont's migratory bats could suffer dramatic losses from industrial-scale wind farms. Vermont is one of a few states that restrict turbine movement to reduce the mortality of migrating bats. A 2016 study estimated that turbines kill between 400,000 and 600,000 bats in the U.S. each year.

How the decline of bats will affect other living creatures, especially insects, remains a question. Bats eat moths, beetles, mosquitoes and other insects, so it's logical to wonder whether the reduction in a major predator might increase those populations — and drive demand for harmful pesticides and insecticides.

There's no good science on that yet, according to Bennett and Kilpatrick. Insects are difficult to count, and various factors could affect their numbers.

Meanwhile, Vermont is attempting to protect bats through the state development review law, Act 250. It has a provision designed to prevent destruction of necessary wildlife habitat of endangered species. In some cases, developers are required to alter proposed tree cutting to protect bat roosts, or to cut trees only after bats have migrated or headed to caves for the winter. The restrictions affect everything from subdivisions to road projects, and they sometimes trigger complaints from builders.

"Usually the objection is just that it's costing them time and money to take into consideration the environmental impacts," Bennett said. That's a reasonable concern, she continued, but in the big picture, the regulations are designed to protect natural resources for all Vermonters.

She recalls playing in the backyard as a child, watching dusk fall and seeing the bats come out. Kids today are much less likely to see that happen, Bennett said.

Rabies is rare in bats, which are nocturnal. "The primary message to share with folks is to not pick up a bat that's acting sick, and make sure the children understand that, too," said John Hall, outreach officer for Vermont Fish & Wildlife. What to watch for? A sick bat might fly around during the day or lie on the ground unable or unwilling to fly. Bats that fly aggressively at pets or humans could be afflicted, although it's normal for bats trying to exit a house to make a swooping pattern.

Public health officials recommend that anyone who has been exposed to a bat in these circumstances see a doctor. If the bat can be caught, contact the Vermont Department of Health to have it tested or contact the Vermont USDA Rabies Hotline at 1-800-4-RABIES.