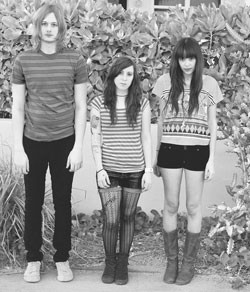 When it comes to the 2013 Higher Ground Comedy Battle, the old phrase “better late than never” comes to mind. Traditionally, the local standup comedy contest takes place in January. But due to some, let’s say, rumored weirdness surrounding this year’s battle that we won’t get into, the date was pushed back to this coming Sunday, May 5.

Whatever. It’s on. And if the trend from the last few years holds, it is going to be excellent yet again.

The battle lineup, chosen through a series of auditions over the past few months, is predictably solid, featuring a nice cross-section of up-and-coming comics and established vets, including Ashley Watson, Cori Marnellos, Joe Borg, Mule, Melissa Moran and Taylor Scribner.

From my experience judging past competitions, a few dark-horse candidates emerge each year. But were I a betting man — thankfully, I’m not — I’d lay the odds of this year’s champ coming from the following pool of contestants: Carmen Lagala, Justin Rowe, Kit Rivers, Kyle Gagnon, Pat Lynch and Phil Davidson.

Lagala, formerly the manager at the dearly departed Levity, is a rising star. The same is true of Rivers, who I’ve heard more than one local comedian refer to as the most consistently funny comic in Vermont. I can’t say I disagree.

Gagnon won the Battle last year and, as the dumb sports cliché goes, remains the champ until someone beats him — which could be a tall order based on the last time I caught his act.

Lynch is as polished as they come and always seems to put on a good set at the battle. Davidson, a recent transplant from the NYC comedy scene who writes for the comedy website Splitsider, should not be overlooked. And, according to local comedy don Nathan Hartswick, himself a finalist last year, Rowe could win the whole thing with a single joke — it’s about a movie trailer for Monopoly and it’s hilarious.

(As an aside, I’d like to propose that Alex Neif be grandfathered in as a finalist, even though he’s not technically in the battle this year. It just doesn’t seem right not to have him up there. And, yeah, I know he’ll probably lose again. But still. One of these years, Alex…)

Whoever wins, the battle itself is one of the most entertaining nights of the year, comedy or otherwise. Sure, it’s a fun competition. But more importantly, it’s a great showcase for the local comedy scene, which continues to expand and improve seemingly every week. And this time around, because it’s happening later in the year, the battle should help set the table for the laugh feast that is Green Mountain Comedy Festival later this month. That will feature pretty much every comic in the state — including most of the battle contestants. The stars are aligning, folks. More on that in the coming weeks.

Anyway, best of luck to all of the battle participants. Now, make me laugh, dammit.

Speaking of comedy, Lagala and Davidson unveil a new weekly comedy night at Halflounge in Burlington this Thursday, May 2. Dubbed “Half & Half Comedy at Halflounge” the setup is that the first segment — or “half” — of the evening will feature sets from established local comedians honing their chops. The evening’s second act will be an open-mic format with newbies who will likely be half as funny. Kidding! To get in on the open mic, email Lagala and Davidson at halfcomedy@gmail.com for more details.

By the power vested in me by, well, me, I hereby declare at least a 10-year moratorium on indie bands with “beach” names. Beach House, Dirty Beaches, Beach Fossils … I could go on all day, and that’s without mentioning bands with beach-related names — looking at you, Best Coast, Wavves and Surfer Blood. I bring it up because one such offender, Beach Day, are playing the Higher Ground Showcase Lounge this Wednesday, May 1, opening for He’s My Brother She’s My Sister and Jeffrey Lewis & the Rain. They’re all fun bands, especially Beach Day, who remind me a little of a better-adjusted Shannon & the Clams. Anyway, if beach-blanket indie rock is your thing, you should go. But for the love of all things Brian Wilson, enough with the beach names already.

This just in from the folks at the Lake Champlain Maritime Festival: the Black Crowes will be headlining the 2013 incarnation of the waterfront fest on August 17. If you’re unfamiliar, the Black Crowes are … the fucking Black Crowes. What’s wrong with you?

Congratulations to Joel Najman, who is celebrating his 30th anniversary as the host of the incomparably excellent Vermont Public Radio show “My Place.” Last week, Najman was honored with a resolution by the Vermont legislature, who apparently resolved that Najman is awesome. Agreed, which is why I think VPR should resolve to archive his shows online for those of us who are rarely near a radio at 8 p.m. on a Saturday night, e.g., music journalists and people with social lives. Yes, I realize VPR can’t afford to do that because of licensing fees associated with streaming copyrighted material. But what if we all promise to chip in a little extra come pledge-drive time? Pretty please? You can even keep the mugs this year! Actually, isn’t there a licensing loophole covering educational uses of copyrighted material? Can you think of anything more educational than pretty much any episode of “My Place”? I should probably just move on.

Hey, have you seen the trailer for “A Band Called Death” yet? It’s on Hulu. Or better still, it’s also on our new arts blog, Live Culture. And it’s pretty rad — the trailer, that is — featuring clips with Henry Rollins, Jack White and other rock luminaries praising the now-legendary proto-punk band. Anyway, the doc is finally being released on Video on Demand on May 24, with a theatrical release slated for late June in select theaters. Death lives! Speaking of movies, farewell, Waterfront Video. Sigh…

Last but not least, if you would all please turn to page 72 of this paper, read the interview with saxophonist Colin Stetson and then come back. I’ll wait … Now, I’d like to encourage you to go see Stetson when he plays the BCA Center in Burlington on Tuesday, May 7, because his live show will quite possibly change your life. Really. His performance two years ago, also at BCA, was among the most profoundly stirring musical experiences I’ve ever witnessed — not to mention an astonishing technical display. I’d wager the 30 or so other people who were there would agree. By the time he finished — Stetson closed with a virtually indescribable version of Bon Iver’s “Flume” — I was honestly nearly moved to tears. Raise your hand if you ever thought you’d see that sentence in this column. Exactly. Just trust me on this one.

Mal Blum, Tempest in a Teacup

A Simple Colony, Make It Start