Kenny Richards has spent the last five years explaining to people that his Halyard Brewing ginger beer is a brewed alcoholic beverage, as its name implies, though it technically is not beer. This task is made tougher by the fact that America's leading ginger beer brands are nonalcoholic.

"Before Prohibition, all ginger beer was alcoholic, right?" Richards, 39, said. "That's why it's called ginger beer."

Since founding his company in South Burlington in 2016, Richards has successfully revived the original incarnation of the British-born, Colonial-era drink that was dealt a nearly mortal blow by America's 13-year ban on alcohol. Now, he is complicating matters by launching a Halyard ginger ale that is neither ale nor alcohol.

"It fits into this beyond-beer moment." Kenny Richards tweet this

The company's new River Pirate ginger ale, available in stores throughout Vermont as of December, is a soda made with fresh ginger. Halyard will begin selling it regionally in time for "dry January," when many people take a break from alcohol after an indulgent holiday season.

Pre-pandemic, when Halyard's taproom was open at its Ethan Allen Drive headquarters, Richards made small batches of ginger ale for teetotaling visitors. Its production method is similar to that of his ginger beer, minus the yeasted fermentation, so it was a natural brand extension. "We know how to do it," Richards said. "We've had customers asking us to do it for a while."

Richards also saw an opportunity to add value to the category. Most nonalcoholic ginger beers and ginger ales are "sugar bombs," he said. "I wanted to bring a product to market that had all the flavor and kick of a really strong ginger beer but a third of the sugar."

On a personal level, Richards is happy to finally offer a Halyard product suitable for a specific pair of demanding customers: "My kids are always asking me if they can have some ginger beer," said the father of two. "Now I can say yes."

Richards' primary focus, though, will remain the company's ginger beers. They are currently distributed throughout New England, New York, New Jersey and Maryland, as well as in the Jacksonville, Fla., area where Richards grew up. Notably, Halyard has earned prized shelf space at Whole Foods Market's New England locations, select regional Trader Joe's and all Vermont Hannaford supermarkets. The ginger beers are also offered on draft and as a cocktail mixer at a number of bars and restaurants, largely in Vermont.

Halyard began shipping cans of ginger beer in earnest in the summer of 2018, averaging 13,000 monthly. January 2022 shipments are projected at 72,000, more than a fivefold jump, plus another 13,000 cans of ginger ale. Because January is the company's slowest month, a summer-to-summer comparison would show even more growth, Richards noted.

Halyard's ginger beers and ginger ale start with U.S.-grown, raw cane sugar; freshly juiced, fair trade-certified, organic ginger; and molasses. The company adds other ingredients depending on the brew. The Breeze layers hibiscus and lime over base tropical flavors. Nicole's Extra ginger beer is the least sweet, with hints of nutmeg and cayenne. Volcano Juice is a shandy-style ginger beer and lemonade blend. The Octopus Queen, the spiciest of all, is made with cinnamon and Madagascar vanilla. The Boston Globe recently called it "a ginger snap cookie, with a kick." The ginger beers range from 4.1 to 6 percent alcohol by volume.

Emily Morton, bar and general manager for the 126 (formerly Deli 126) in Burlington, has been serving Halyard ginger beer and deploying it in cocktails since its launch. She was familiar with ginger beer in its nonalcoholic form as an ingredient in classics such as the Moscow mule and the dark 'n' stormy, but alcoholic ginger beer was novel for her. 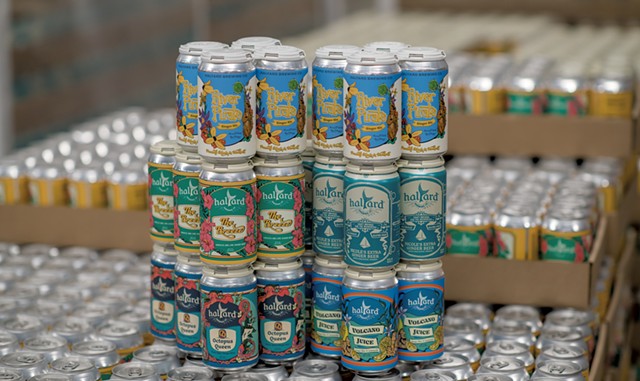 "It was great to have something new that was cool and gluten free, and delicious on its own and as a mixer," Morton said. She likes to pair the not-too-sweet ginger beers with traditional holiday baking spices, as well as tropical flavors, such as citrus, pineapple and passion fruit. She uses Nicole's Extra in her Industry Mule No. 3 with Fernet-Branca, pineapple and lemon juices, and cinnamon simple syrup. She's also planning to use River Pirate ginger ale in the bar's "temperance" list of zero-proof cocktails. (See sidebar for Morton's cocktail recipes.)

Since June 2021, Halyard has partnered with Shacksbury Cider in Vergennes to brew and can its ginger beer and ginger ale under a co-packing agreement. Shacksbury's production team works closely with Halyard head brewer Bill Hunsinger. On a recent tour of the massive concrete bunker-like building, cans of the Breeze were making their way from the canner through the pasteurizer to the labeling line.

Co-packing is a common way for small food and drink companies to scale up without needing their own manufacturing plant. "It's great to work with a successful company like Shacksbury," Richards said. "It allows us to grow without having to invest too much."

It's a reciprocal relationship, said Shacksbury cofounder Colin Davis. The hard cider company expanded into 40,000 square feet of new production space in 2020, anticipating future growth of its own line. "Any time you expand, it's about how far ahead do you want to jump," Davis said. "It can be herky-jerky. [Co-packing] helps us smooth it out."

Shacksbury works with a few other Vermont beverage brands in addition to Halyard, Davis said. "It's also really fun," he added, noting that everyone learns from each other.

He pointed out that ginger beer is similar to hard cider in some ways. "It has a long and interesting history like cider," he said. "It was pushed to the back and is making a comeback."

That history was what originally piqued Richards' interest and contributed to a radical career shift. In 2016, he was well on his way to earning a religious studies PhD at the University of North Carolina at Chapel Hill when he reluctantly concluded that academia was not for him.

Richards had first read about ginger beer while doing doctoral research on religious freedom during the Colonial era. "I'd never heard of alcoholic ginger beer before, and I wanted to try it," Richards said.

When he could find no examples other than a mass market import, Richards started investigating how to make it himself. "I'm always fermenting and cooking, making things and curing, gardening and growing," he said.

Though there were "terabytes of information about how to homebrew beer and cider," Richards found very little on how to brew hard ginger beer. He began what he called an "inventive process" of trial and error and finally landed on a recipe that he and friends really liked.

Richards said it wasn't important to him that it be an accurate historic representation. "Reviving to me isn't so much about doing what was already done," he explained, "but taking what was done and growing off of it."

When Richards and his wife, dancer and teacher Nicole Dagesse, moved from Chapel Hill to her home state of Vermont in 2016, he decided to try bootstrapping his way into beverage entrepreneurship.

"I'd never professionally brewed before and never run a business before," Richards said. But, he added dryly, "being a grad student is really great training for running a business, because you just beat yourself up and don't make any money for years and years."

Richards named his company after the rope used to raise and lower a sail. It reflects his own background growing up on the water and the genesis of ginger beer in the ocean-spanning spice trade. "It's a call to the history of the product," he said.

Halyard's sales have been robust throughout the pandemic, Richards said. Next year, the company will begin selling in Pennsylvania, Ohio, and probably Los Angeles and San Diego. 2021 sales by volume is double that of 2020, and the jump isn't merely due to expanded distribution, Richards noted. Vermont sales are up by 68 percent since last year, but the company's number of accounts has increased by only 15 percent, so strong repeat sales are driving growth.

His ginger beer "fills a lot of what people are looking for," Richards said. "It's gluten free. It's low sugar. It's whole ingredients. It's craft-made. It fits into the better-for-you drinks. It fits into this beyond-beer moment."

In 2022, Halyard will grow to an eight-member team, and Richards hopes to reopen the South Burlington taproom, where he still makes pilot brews of new flavors. While he declined to share dollar sales, he said revenue is strong. He started paying himself regularly last year, he said, "but I still skip paychecks every now and then."

There are now a few other small, artisan alcoholic ginger beer makers in the U.S., but Richards' goal remains to become "the American craft ginger beer," he said. "I've been on the bleeding edge of this."

The original print version of this article was headlined "Spicy Revival"