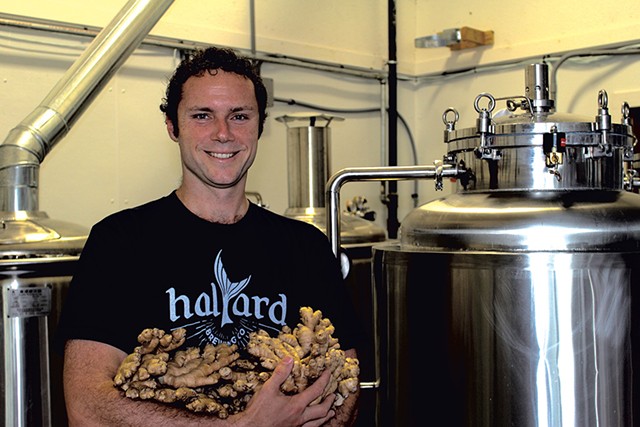 Nowadays, most ginger beer is more akin to soda than to a hoppy brew. It's the finishing touch on a Moscow mule or a dark 'n' stormy, or it's used like its cousin, ginger ale, to tame upset tummies. Pre-Prohibition, however, ginger beer was an alcoholic brew, heady on the spice and wildly popular across England, Ireland, Canada and the States.

Since its production was curbed in the 1920s, the techniques of brewing alcoholic ginger beer have been largely forgotten. But in early October, Hinesburg local Kenny Richards will attempt to revive the tradition by opening Halyard Brewing at 80 Ethan Allen Drive in South Burlington, steps away from Farnham Ale & Lager. Richards' ginger beer brewery will have a first-class license to sell pints, pitchers and 32-ounce howlers. Small bites like charcuterie and local cheese plates will supplement the sips.

"Sometimes these things just appear on your radar and get you thinking," says Richards when asked about his inspiration for reviving the bygone beverage. "I started experimenting over two years ago. It was interesting; there were only a handful of producers making traditional ginger beer across the country."

Richards starts with organic and fair trade ginger, cane sugar, molasses and spices, then uses brewer's yeast to convert the sugars into alcohol. When Halyard opens, "we'll have two varieties on tap," Richards says. The bar will sport tap handles turned from cherry wood harvested at Richards' father-in-law's farm in the Northeast Kingdom, he adds.

Halyard's first brew is the True Ginger Beer, at 5.1 percent ABV, light and warming on the ginger spice and dry-hopped for citrus and floral notes. The second, the 7.8 percent Wayward Amber Ginger Beer, is an intensely spiced brew with rich undertones of vanilla and clove.

Although Halyard's bar is dedicated to kegs of ginger beer — with canning and bottle distribution planned for the future — Richards also endorses the use of his ginger beers in cocktails. His current favorite? The Mexican Shipwreck: muddled mint and lime topped with one ounce simple syrup and 1.5 ounces Mezcal, shaken over ice and capped with True Ginger Beer.