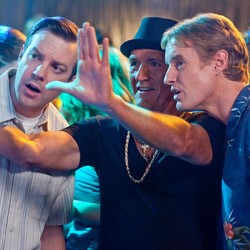 This winter in Hollywood comedies, ’tis the season of middle-aged marital discontent. In Just Go With It, Adam Sandler uses his bogus wedding ring to pick up young hotties. In The Dilemma, Vince Vaughn chides his best friend’s wife for stepping out with a young hottie of her own. (Who ever expected the 1990s’ favorite pixie girl, Winona Ryder, to play a shady Mrs. Robinson character?)

And now, in Hall Pass, the latest from gross-out comedy meisters Bobby and Peter Farrelly, two fortyish married men (Owen Wilson and Jason Sudeikis) get permission from their wives to go out there and chase hotties, just for a week. It’s official: Generation X is having a midlife crisis.

Hall Pass manages to be the funniest of these movies (and, yes, that’s faintish praise). Rather than dancing coyly around the adultery issue, the Farrellys and their coscreenwriters ask: Given official permission to cheat, would these settled family men really find it so easy to pick up nubile girls and swing for a week? Or would they strike out and wimp out and spend most of their precious vacation from matrimony engaged in less strenuous activities, such as eating greasy food, ribbing each other and snoozing?

The second possibility may not cater to viewers’ fantasies, the way Sandler’s Hawaiian vacation with Brooklyn Decker did, but it’s better fodder for comedy — particularly of the Farrelly brothers’ grubby, physical variety. Wilson and Sudeikis play a pair of good-hearted, sex-obsessed oafs whose high-schoolish behavior drives their wives (Jenna Fischer and Christina Applegate) to such distraction that the women take the advice of a therapist friend (Joy Behar), who suggests giving the men a week off from their marital vows. Freedom, she predicts, will paralyze them.

And so it does, for the most part. While Wilson clumsily hits on his favorite barista (Nicky Whelan), Sudeikis finds himself resorting to a massage parlor. Humiliation awaits the would-be players at every turn, until their single buddy Coakley (a leathery, Hefner-esque Richard Jenkins) shows them how to work a club. His advice on getting laid is ruthlessly practical — look for the jittery girl with a nicotine patch — and the men find themselves wishing for the safe companionship of their wives. That’s when they realize that their wives have a hall pass, too.

To their credit, the Farrellys also give Fischer and Applegate a few scenes of horniness and humiliation; their characters are neither above-it-all saints nor inscrutable bitches. The actors all have good timing, and the gags come fast. But it should be noted that the only genuine fall-down-laughing sequence belongs to lanky Brit Stephen Merchant, as one of Wilson and Sudeikis’ married buddies, and that it happens during the film’s credits, when he imagines what he’d do with a “hall pass” of his own.

For a film that’s clearly designed to give the audience a little anarchic break followed by a reaffirmation of the merits of monogamy, Hall Pass is reasonably entertaining. Though they still lean hard on wackiness, bodily fluids, and the occasional crotch or boob shot, the Farrellys think out and build their character-based setpieces, and that modicum of effort gives them enough comic ammunition to blow Sandler’s lazy goofing out of the water.

They have a solid comic thesis, too: Never underestimate the inertia of modern Homo sapiens. As Homer Simpson could have told our protagonists, libido and other appetites may get folks off the couch, but it takes a lot more to keep them from coming back.