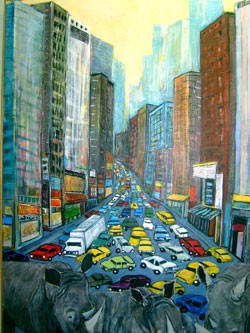 Burlington City Arts unveiled a new exhibition in the Maltex Building on Pine Street this month. The Maltex is one of the great venues of the Queen City. In times past it served as the flagship site of the South End Art Hop, but in recent years it’s been curated solely by the BCA Art Sales and Leasing program. Though various businesses reside in the building, the general public has little reason to visit the place — besides the art. And that’s a good enough excuse to wander through, especially given the quality of the shows mounted there in recent years. This spring, paintings and photographs deck the halls.

Paintings by Patricia LeBon Herb and Lynn Rupe appear on the main floor, and many of the canvasses are large scale. Rupe, a Barbara Smail Award winner, is showing works from her “Urban Habitat Series” of 2004-05. These are humorous cityscapes of Manhattan-esque concrete canyons overwhelmed by incongruous wildlife such as whales, falcons and elephants. “Expect Delays — Rhinos” is a cabbie’s worst nightmare, as the ponderous beasts crowded into the foreground remain oblivious to the midtown chaos they’ve created.

Allison Hale teaches photography in BCA education programs and at Champlain College. She’s also a member of the BCA Community Darkroom. A selection of her black-and-white photos, shot with a Holga, appears on the Maltex’s second floor. Hale’s grainy images are painterly by virtue of their unpredictable qualities. Light leaks in the camera produce ghostly shadows and uneven tonalities. In “Winter Fire,” the corner of a blaze-damaged house looks like a Civil War-era casualty.

Jeff Schneiderman’s vibrant colored photographs, taken around the world, appear on the second floor as well. One of his images, “Reflections IV,” is a triptych of tall, thin panels in which the paisleyed surface of a body of water ripples and mirrors the colors surrounding it. The ripples recede into the picture plane, creating a rhythmic counterpoint of verticals and horizontals. Many of Schneiderman’s pieces were transfered to canvas, yet they remain crisp and clear.

Annie Tiberio Cameron’s photographs can be found one floor up, on the top level of the Maltex. Her “Poppy Abstract” is bathed in the redness of the flower’s petals. “Egyptian Water Lotus” also focuses on the abstract qualities of a bloom. Values are modulated on the fleshy lotus leaves, and their graceful edges embrace the yellow stamens.

James Vogler’s untitled paintings, also on the top floor, are abstractions based on soft-edged geometric forms. He uses oil and wax to build translucent surfaces on which the colors are warm and seem to overlap, melding to create an appearance of depth.

The lowest level of the Maltex is also filled with paintings, by Shawna Cross and Kathleen Caraher. Like a Chinese landscape, Cross’ large oil “Echo on a String (burn brightly)” depicts a segment of a misted mountain range, with the summit sandwiched between foreground fog and a background cloud. Cross’ ethereal hues pass from white to orange; perhaps the “burning” mentioned in the title is an actual forest fire. “And It Was Glorious” is a vertical composition of similar orange, yellow and green hues, but with a less readable narrative. A dark upper-right corner may reference a night sky, but it hardly matters. It’s a successful painting no matter what it’s “about.”

The decorative leaves, vines and pea pods of Caraher’s canvasses are joyously painted. “May Your Pods Always Be Full” bubbles with purples, blues and magenta legumes nestled in leafy greens.

The works of this current crop of artists can be viewed at the Maltex through September. Perhaps the show will feature in the Art Hop program that month, but it’s worth a stop either way.