Haley Rice remembers that, as a little girl, she always wanted to live in a church. Now her dream has come true: In October 2016, Rice and husband MacArthur Stine moved into the former St. Mark's Church in Castleton. With some imagination, a lot of elbow grease and inventive décor, the couple has turned the blessed building into a quirky, cheerful home. Its other occupants: their 1-year-old son, Keaton, two cats and a dog.

Built in 1899, the vacant house of worship first caught Stine's eye when he moved to Castleton in 2012.

Set just off the intersection of the town's Main Street and the entrance to Castleton University, the location couldn't be more convenient for Stine: He's director of technical services at the school.

Stine purchased the property in 2014, the same year he met Rice, who is the operations and marketing manager at Middlebury's Town Hall Theater. He spent that winter gutting the interior while living in the building's minimally heated undercroft — that's church-speak for crypt or basement.

In the renovation's early stages, Stine says, a friend recommended that he take plenty of time to envision the home he wanted to build. He was in the right place for quiet contemplation.

One serious boon for the project: Despite its age, the building has great "bones." Church documents from the local historical society explain that the building was designed with "an architectural system of proportions that derive from pure geometry."

With the help of Rice, friends and family, Stine spent the next two years transforming the space. What was originally a single, high-ceilinged, 905-square-foot room became two with the installation of a wall. The area once dedicated to the altar became the master bedroom, with the altar rail repurposed to set off a newly created loft.

The bigger parcel is airy, with an open floor plan containing a kitchen, dining room and living room. At its highest, the vaulted ceiling reaches a dramatic 21 feet. Overhead are not only beautiful exposed crossbeams but an original circular stained-glass window. To make the most of the large wall space, Stine and Rice have installed a projection screen.

The home's other 10 windows are also stained glass. Stine's father, whom he describes as a "hobbyist," restored each of these tall peaked windows with borders of colorful glass squares. The window frames, Stine explains, are made from mirrored boards that he salvaged from the undercroft.

Closer to the ground, evidence of church life lingers in the floorboards: Where the pews sat, the southern yellow pine is relatively fresh — but it's darker and more worn where seated churchgoers once put their feet.

As Stine tore down walls, removed fixtures and disposed of layers of horsehair plaster, the church offered up several relics. From the walls came a vintage glass bottle and a can of Schlitz, which Stine and Rice have since incorporated into their eclectic décor. 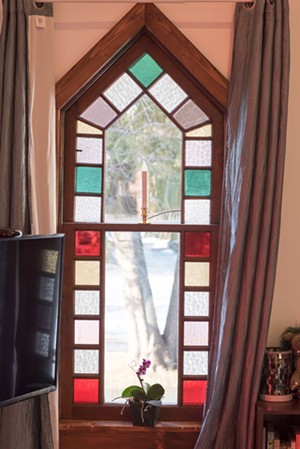 More significant is the time capsule they found behind the building's crumbling cornerstone. The metal container, which was inside a wooden box, was filled with newspapers and a hymnal. The couple has donated the artifact to the Castleton Historical Society.

Though living in a rehabbed church might sound a little somber, Rice and Stine have warmed their nest with a colorful, humor-inflected style all their own.

"We're theater people," Rice says, "so everything comes from a show."

She points to their orange-red couch from Town Hall Theater's production of La Traviata. That huge gold lobster on the wall? A fixture of many a feast scene. A model of Salvador Dalí's melting clock from "The Persistence of Memory" drips from a bookshelf, not far from a framed "Cheap Art Manifesto," a Bread and Puppet Theater broadside.

In the future, as their son gets older, the parents say they might like to update the 750-square-foot undercroft for more space. For now, though, they're just enjoying themselves and their quarters.

The original print version of this article was headlined "Sacred Space"