Hail to the Queens 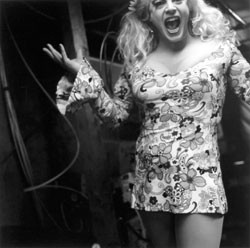 You don’t have to be a man in a dress to be a drag queen. Drag, as Evie Lovett presents it in her tender and hilarious black-and-white photographs at the BCA Center, is simply about transformation, and anybody can do it.

Case in point: Among the queens at the Rainbow Cattle Co. — a now-defunct gay bar in rural Dummerston, which Lovett documented for nearly two years — was one biological woman. Yet for each performance, she transformed into something entirely different: a queen. Miss Sophia Penelope Precious, the performer explains in a Vermont Folklife Center audio interview accompanying the large-scale photos, is more outgoing, more sexual and braver than her daytime alter-ego. “When you’re at a party and you’re at your most entertaining — that piece we all have — that’s Miss Sophia,” she says.

In “Sophia, blond wig,” we see this queen in profile, scooched down in a chair, legs spread, her hands firmly on her inner thighs. Her eyes stare piercingly, as if she’s getting into character. Sophia wears women’s clothes — black stockings clipped to a garter belt over striped underpants — but her demeanor is distinctly masculine. Or maybe it’s just the pancake makeup on her face and her long, blond wig. “Drag queens don’t have hair,” Sophia explains. “They have wigs.”

When Sophia is on stage, she adds, it’s not uncommon for people to mistake her for a man dressed as a woman, even with her very real breasts spilling over her corset.

Which is exactly what they’re doing in “Sophia doing Mercedes’ lashes,” one of the most striking images of the show. The foreground is filled with the soft pillows of Sophia’s breasts and the hollows around her collarbone as she leans over Miss Mercedes Roulette, prepping his fake lashes. Behind all this luminous femininity, Mercedes sits in partial darkness, only halfway transformed, his eyes closed — they have to be when lashes are being applied — as if he’s making a wish.

Does he feel like a woman up there on stage? an interviewer asks Mercedes in the accompanying audio clip. “One hundred percent,” he says. “But after two or three songs, I want to be a boy again.”

Lovett’s photos offer two distinct perspectives: In the first, the viewer is spying on the performers, who are utterly focused on their transformations — applying lipstick, shaving each other’s backs, etc. In the second, it’s as if the viewer has barged into the room inadequately dressed, and the queens are staring back in bitchy judgment.

In “Mama and Kitty,” for instance, the pair look directly at the camera: Mama seated with one leg up on another chair, crotch front and center, a territorial look in her narrowed eyes; Kitty stands behind her, a hand on her hip.

An exception to these full-on glares is “Mercedes on the sink,” in which the fully glammed-up queen perches on the edge of an industrial sink with her back to the camera, looking over her shoulder with the slightest seductive smile.

There’s nothing glamorous about the venue, especially the gritty backstage area where Lovett’s photos were taken. In “Mitzi, cigarettes,” the subject stands before a mirror, a band of fluorescent light illuminating the smudges and stains on its surface. In another image, Mitzi poses primly, like a doll in a polka-dot dress, the foreground framed by exposed pipes and gauges.

The dank environment makes the performers’ transformation into shimmering queens even more striking — and gives the whole scene an illicit feel. In an audio clip, Mercedes says the smoke-and-mildew smell made her feel as if she were performing in an underground New York City club. Perhaps contradictorily, she adds, “Feels like you’re putting on a million-dollar show.”

Few photos reveal the queens as they might appear in performance. “Chloe posing” offers a glimpse: With the button-down shirt of his day job half off, the performer’s shoulders are thrown back, his lips fiercely pursed, as he flaunts his stuffed black lace bra, muffin top be damned!

The sense of anticipation is palpable in “Candi before going on stage.” Decked out in a dark velvet gown, its cuffs and collar drenched in tinsel, Candi’s eyes are closed, her fingers grazing the rim of the sink, as she steps toward the stage.

“I feel like during the day, I’m still kind of mousy and quiet,” she says in the audio clip. “As Candi, I don’t have to say a thing, and I’m loud and clear.”

Only one performer, Miss Mama Mayhem, reveals her daytime identity in an audio clip: Mark, who works as a nurse in Brattleboro. For Mark, drag isn’t about being beautiful but about making people laugh. He recalls the thrill of his debut performance as Mama, singing “Under the Boardwalk” in a fat suit and a bikini.

In the accompanying photo, we see only one of Mark’s eyes, framed in a glowing circular mirror as he applies eyeliner. People often ask him if he wants to be a woman. “Are you out of your fucking mind?” he usually answers. “Do you know what it’s like walking or dancing in those shoes?”