Hacks Premieres at Last - and Takes Viewers to Vintage Vermont 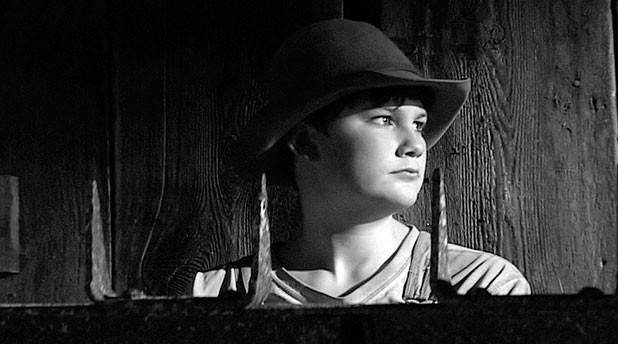 As filmmakers go, George Woodard has a great story. He jots script ideas down on “tit slips” while he’s in the barn with the cows. He learned how to use a camera by filming his son on the tractor, and how to light actors by watching a barn cat ride a sawdust cart. If you want to interview him, you may need to catch him right after the morning milking.

That’s the kind of nonstandard bio some film school grads would kill for. But until recently, what Woodard didn’t have was a finished feature film. Now he does. More than five years after production started, the Waterbury Center dairy farmer and his partner/producer, Gerianne Smart, will premiere The Summer of Walter Hacks this Friday at the Green Mountain Film Festival in Montpelier.

Like many first films, Summer is a coming-of-age drama. It follows the title character, played by the director’s then-11-year-old son Henry Woodard, as he grows up fast. But one thing that sets Woodard’s movie apart from the pack is its setting: rural Vermont in 1952. It features lots of action, too, including a white-knuckle chase scene.

If cinephiles learned anything from the HBO series “Project Greenlight,” it’s that thoughtful period pieces starring child actors are risky business. In the show’s first season, Matt Damon, Ben Affleck and their producer friends fretted about the expense of shooting a script called Stolen Summer, a boy’s coming of age set in the 1970s. Made for about $1.8 million, it earned less than $200,000.

Woodard’s Summer is a way smaller venture — a homegrown labor of love, not a box-office gamble. By Hollywood standards, its budget was microscopic: Woodard says with a chuckle that it was “$6000, but we spent $35 … the postproduction was expensive.”

Part of that cost was the three-year process of editing and adding visual effects — created by Burlington filmmakers Justin Bunnell and Michael Fisher — and a score by Pete Sutherland, performed by members of the Vermont Symphony Orchestra.

Another pricey part: getting rights to the songs and movie clips used in the film, including excerpts from classic westerns such as Red River. (Like Woodard, who grew up on “Gunsmoke,” Walter lives and breathes cowboy lawmen.) Smart had to get permission not just from the studios but from surviving relatives of the actors who appear in the clips. The resulting arrangement allows Woodard and Smart to show Summer at festivals for three years but not to distribute it commercially.

To get his raw footage, the writer-director, now 57, used what was on hand: The child actors are his son, his nephew and other kids Woodard noticed in local stage productions. The “vintage” tractors in the film are ones he still uses; midcentury cars his own and loaners from locals. Walter Hacks’ family barn is Woodard’s, too — but with some computer-graphic effects to give it a higher roof, “more like what a conventional, stereotypical real barn would look like in that time period,” he says.

With no “decent dolly” for his digital camera, Woodard took inspiration from the great director John Ford, who preferred to keep his action inside the frame. “Let’s go backwards and do it the way the old guys would have done it,” he recalls thinking.

But the “old guys” probably didn’t have a rig like the one Woodard used to film his chase scenes — a platform on a plow frame that allows the camera operator to film from 8 inches above the asphalt while moving 30 miles per hour. “Tell you what,” Woodard says, “that’s a thrill.”

The Summer of Walter Hacks does evoke a vanished era. It may not be in the same league with To Kill a Mockingbird, but many aspects of the film — from the old props to the starkly lit, black-and-white imagery to the unforced performances of the kids — will remind viewers of that classic.

Summer isn’t a chronicle of Woodard’s own childhood — he was born that summer of ’52. He chose the year partly because “there weren’t any TVs; radio was still the choice of entertainment in the house.”

When they’re at home, radio is what links farmers Walter Hacks, his dad (played by the director) and teen brother (Matthew Woodard) to the outside world. Their phone doesn’t work, and the plot pivots on their isolation.

Another reason to shoot in period: “The past seems to be visually more interesting to me than the present,” says Woodard, who wistfully recalls a time when people knew the difference between their dirty work wear and Sunday best.”

How did the young actors, with no memories before satellite TV and Nike logos, get in the spirit? Francesca Blanchard was 12 when she played the role of Walter’s plucky sidekick, Margaret. Now a 17-year-old Champlain Valley Union student, Blanchard says, “We were constantly surrounded by the actual setting of the movie, so that helped a lot. The setting itself is the story. George was going back and forth and milking the cows and then filming. He was doing everything, him and his friends. It made for a great crew family.”

To Blanchard and Henry Woodard — who now stands 6-foot-7 — the shooting already belongs to their realm of childhood memories. “It’ll seem like it was 20 years ago,” says Blanchard with a laugh. This Friday, she’ll finally get to see Woodard’s vision on screen.

“I’ve been working on it for so long, I can’t really believe it’s actually here,” says the director. For her part, Smart says she’s experiencing “equal parts panic and joy. When we see ‘The End’ on the screen on Friday night,” she concludes, “then we’ll be celebrating.”