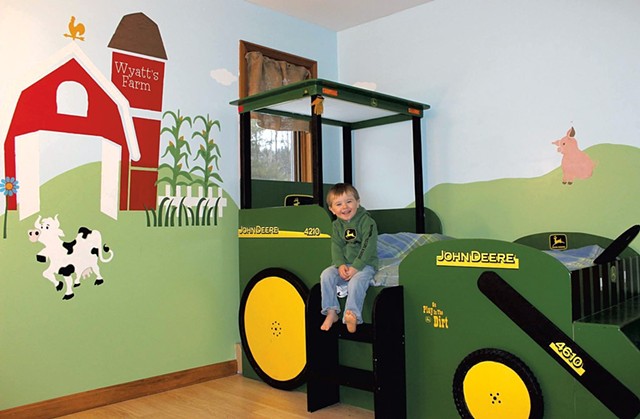 Sometimes 6-year-old Wyatt Bogie forgets how unusual his bedroom is. And then he'll have a friend over for a playdate. "And they'll go in, and they're like, Whoa!" said Wyatt's mom, Amanda Gilman-Bogie.

That's similar to the reaction she had when Wyatt was 3, and the Berlin family was at her in-laws' Ryegate home for Sunday dinner when Papa Bud told Wyatt he had a surprise for him in the garage. "And we went into the garage and there was this giant tractor bed on the back of a flatbed trailer," Gilman-Bogie said. She and her husband, Brian, had no idea that his dad was building it.

"I'm a big John Deere fan, and I just sat down and decided to build him a bed," said Bud Bogie, a collector who owns seven John Deere tractors. He modeled Wyatt's twin bed on a tractor he owns. He didn't use a pattern or kit, he said, "just made it up." (He built a second for a charity raffle, and he built a princess castle bed for Wyatt's cousin.) The loader on Wyatt's bed has a door on the front and gives Wyatt a place to store books and toys — "things he wants to hide from his brothers," his mom said.

Once she fully comprehended the gift, Gilman-Bogie got to work to give it a proper home. She painted Wyatt's bedroom walls light blue to look like sky. Then she painted green, rolling hills — freehand. "I figured there's really no right or wrong to it," she said. She used stencils to add a red barn, a silo that says, "Wyatt's Farm," a few stalks of corn, a fence and farm animals. She got the stencils from online retailer My Wonderful Walls. They're adhesive and sturdy enough that she passed them on to a friend who used them to paint a toy room.

"This is totally something that the average mom can do because I have no artistic ability at all," she said. Painting took about 30 hours. Gilman-Bogie's mother-in-law helped, she said, "but mostly, it was a labor of love for me."

As a finishing touch, she threaded two small burlap bags onto a curtain rod to make a valance. In addition to the bed, the room has a chest of drawers and the bookcase that she built in high school shop class.

"My bedroom is awesome," said Wyatt, who pretends he's driving his tractor bed. He likes to tag along when his dad, a full-time farmer, does chores, and he runs outside to ride on a real tractor when Brian bales hay. His mom often runs after him yelling, "Put your shoes on! Put your shoes on!" A "cloverbud" in the Trailblazers 4-H club, Wyatt asked for a baby cow for Christmas. "But we had to turn that request down and tell him no, he wasn't quite ready for that, because that would mean that Mom and Dad had a baby cow...'' Gilman-Bogie said. For now, he'll have to settle for the happy Holstein on his bedroom wall.

His brothers, twins Maxwell and Sawyer, turn 2 in March and share a "pretty simple bedroom," Gilman-Bogie said. It's "painted a sweet, neutral color," she said, has wild animal photos on the wall, and holds two cribs, a reclining rocker and an antique dresser. "I do hope that we can do a fun space for them in maybe a year or two, when we kind of get a better sense of what they might be interested in," Gilman-Bogie said. "It could also largely hinge on whether or not Papa rolls into the driveway with some statement piece of furniture that Mom's then planning a room around!"