For Patty Kelly and Jason Gaudette, the coldest months of the year are all about one thing: hockey.

When Thanksgiving rolls around, they and their sons — 11-year-old Colton and 8-year-old Lucas — begin prepping their Weathersfield backyard for an ice rink. They put up boards, bolt them together in a rectangular shape, then put stakes behind the boards for support to form the perimeter of the rink. Then, when the forecast calls for a string of days with single-digit highs and no precipitation, the four of them roll out a heavy-duty white plastic tarp to line the inside of the rink and drape it over the boards. They run a hose from a nearby creek to a water pump and spend anywhere from three to 12 hours, depending on the rate of water flow, flooding the rink.

This year, an early cold snap enabled them to fill the 35-by-80-foot rink — their biggest yet — in early December. They were on track to make record time when their pump broke, and they had to rent a backup. Another winter, there was a leak in the plastic liner.

Once filled and frozen, the rink requires regular maintenance, from draining excess water by creating a siphon with a garden hose, to doing an occasional hot rinse to smooth out the surface, to snowblowing. "Every year is an adventure," Kelly said. 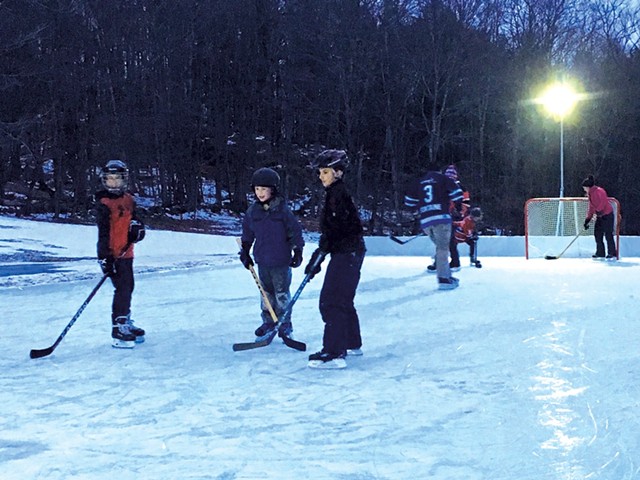 Some might say the couple, natives of Ottawa, groomed their sons for the rink. They put them on "two-blade, cheese cutter skates" at 2 years old, "right after they could walk," said Kelly. Both boys now play hockey for the Hartford, Vt.-based Upper Valley Storm, where their dad is a coach. Lucas is also a member of the Vermont Flames, an invitation-only league. The family spends many winter weekends traveling to tournaments around Vermont and Canada.

Kelly and Gaudette built their first backyard rink — 20-by-40-feet — in 2012, and have had one every year since. As their sons grew, so did their rinks. Kelly said her husband's ultimate goal is to build a rink that's 50-by-100-feet, a little more than half the size of a regulation rink.

In 2016, the family purchased a prefabricated 10-by-20-foot warming hut from the Jamaica Cottage Shop. They use it to store their skating gear, which includes a skate sharpener and skates of all sizes that Kelly lends to friends and neighbors. Gaudette's father took apart an old picnic table to make benches for inside the hut, which also has rubber mats and a propane heater. Flood lights on each end of the rink enable skaters to glide after dark. 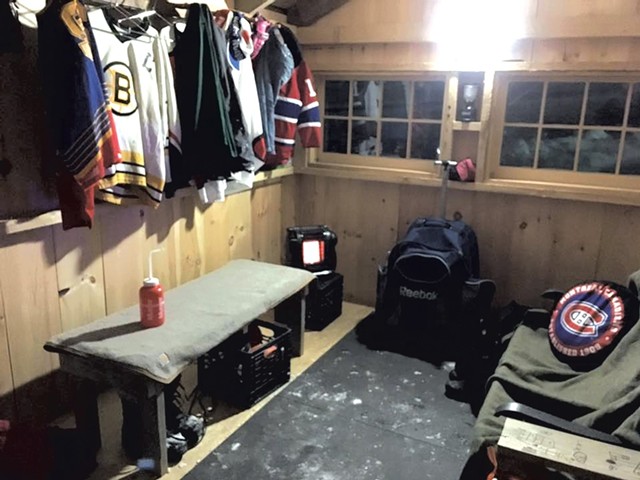 In rural Weathersfield, population less than 3,000, Kelly says her family is known as the Canadians with the hockey rink. Since it's visible from the road, drivers sometimes honk as they pass by or stop to get a closer look. One man brought over two nets left over from when his kids were younger. Another dropped off old leather goalie gloves.

Though the boys spend considerable time hitting pucks in indoor arenas, that doesn't stop them from taking advantage of their very own rink. "Even before they go to their regular practice," Kelly said, "they will be out there playing."