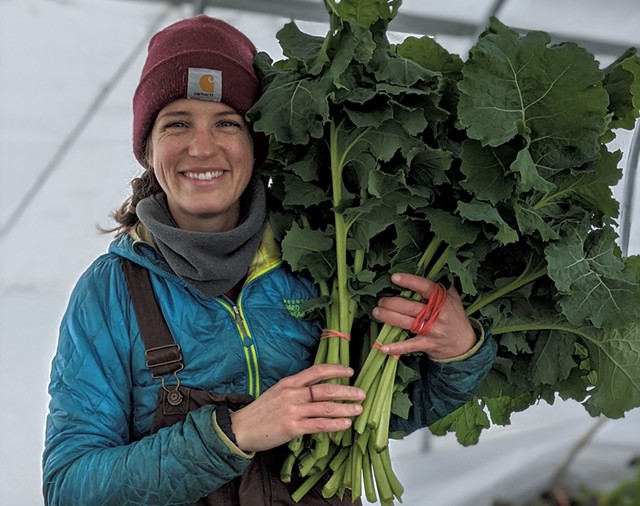 Tidy, weed-free rows of salad greens basking in the warmth of a high tunnel, bursting bunches of kale lined up on a market table, colorful CSA shares photographed from directly above: These are the makings of an "Instagram farm." They're real farms, but the images being shared are the modern version of mid-'90s glamour shots. Instead of feather boas and sequined blazers, the farms are dressed up in perfect produce and seemingly constant sunshine.

Taylor Mendell owns Footprint Farm in Starksboro with her husband, Jake. On the surface, the couple's @footprintfarm account might give off Instagram-farm vibes: satisfying soil shots, the requisite kale bunches, a cute dog named Spud. Read a single caption, though, and the veneer cracks: "Last year our carrots kicked our butts ... our systems have been anything but efficient."

That honesty is purposeful, Mendell said, and it's led to a project she calls Habit Farming. With a website, a separate Instagram account — @habitfarming — and a Patreon page, it focuses on the realities of farming. She shares the habits, from tiny daily tweaks to system overhauls and business planning, that help reduce stress and labor to make farming a successful, sustainable venture.

Mendell, 32, started Habit Farming last November as the farm was wrapping up its seventh season. That timing was consistent with a cycle she had noticed among fellow farmers through her involvement in the Vermont Young Farmers Coalition.

"When we started in 2013, it felt very much like there was this vibrant group of new farmers," Mendell said. "It felt very hopeful and possible to start a small farm. Then, over the years, I've seen a lot of those people stop farming. There's a three- or four-year drop-off; if you make it over that hump, then you're trying to make it to year seven.

"Then something happens around year seven, which we definitely experienced in this last year," she continued. "You mature with your business and start thinking about different topics."

The big year-seven question for Footprint Farm has been, "Well, does this work?" Mendell said. Her goal with Habit Farming is to address that question with complete transparency, sharing struggles and solutions with the hope of helping other farmers and changing the conversation around farm viability.

Seven Days chatted with Mendell by phone — in between late-winter harvest and replanting — about why she started Habit Farming and what she hopes its impact will be.

SEVEN DAYS: I want to start with a question that you've asked yourself on your blog: Why Habit Farming?

TAYLOR MENDELL: There are two sides of it. One, the themes that are coming up in Habit Farming came up on our own farm. Why were we pursuing different methods of habit-forming and decision-making analysis? The other side is, why did I put it out there in the world? That one's a little more straightforward to answer — which is not that straightforward, but I'll try.

There's been a lot of talk — I think this is common in all industries, but it's been a huge topic in farming the last couple years — about mental health and suicide rates among farmers. It seems like we're in the next wave of mental health crisis, similar to the dairy crisis in the 1980s.

I was hearing from other farmers a lot of stress and anxiety and this feeling of a loss of control. In my personal life, I've spent a lot of time exploring my own anxiety issues through really valuable therapy and researching behavior modification therapy and stress reduction. So I thought, Well, if anything I have to say could be helpful for anybody else, then why not put it out in the world? The worst thing that could happen is that nobody reads it.

SD: Are people reading it?

TM: Yes! I put it online, and within two weeks that website got 200 emails and subscribers. The Instagram account has over 2,500 followers now, and it has a really high engagement percentage. The Patreon page has about 80 people who pay about $2 a month, which helps pay me for my time. I've even had people reaching out from organizations with offers to speak. It's been kind of a shocking response, but it feels important now.

SD: One of the themes you address regularly is the isolation farmers feel. Why is that important to talk about, and how do these posts help strengthen the farming community?

TM: Whenever I have gone off of the farm and met with other farmers, we start by talking about something technical: "How do you do [blank] on your farm or in your business?" It usually evolves into being more personal, and I've gotten so much value out of being in a group of farmers that is able to be more vulnerable because ... the makeup of the group is more comfortable, or the setting. When I realize I'm not the only one dealing with these struggles, the weight is lifted. It really has helped to move our business forward. I want that sense of community and honesty [to] be more widespread.

SD: You're really candid about things like budgeting and mental health. Is sharing that personal side of it intentional — to counteract that Instagram perfection?

TM: It is. I get frustrated sometimes when I have this image of who somebody is based on what they put out on social media, and then I go visit the place and it's so curated. I hate that "authentic" has become a buzzword, but I really try to think, If somebody met me in real life, would they be surprised? I try to show people that I am really nerdy, and I do really worry about things all the time, and if they're feeling the same way, it's not weird.

SD: How does that help people with their willingness to share?

TM: There's been a culture within farming for generations of immense generosity. There's so much help with information and labor or getting a project done. However, that generosity in sharing usually reaches some sort of roadblock when it gets personal. There's a sense among farmers that we feel like we should be able to do it all. We should know how to fix our tractor and do marketing and take care of a family and feed our community at a price that makes sense — and, and, and.

"There's a sense among farmers that we feel like we should be able to do it all." Taylor Mendell tweet this

We have a blind spot when it comes to profitability on farms or asking ourselves if we're making a living wage. We're really good at justifying that we're living this amazing life: We eat really well, we work outside, we make our own hours. But did we really make money on that bunch of carrots? Probably not.

The more honest I have been, the more people come up to me and say how much they value it, and that it's allowed them to have more honesty. They're having different conversations.

SD: You've started sharing your business resources — from what you call "Hippo Camp" — to start those conversations. How does that fit into the puzzle?

TM: There's a matrix where you put different tasks into categories of urgency and importance. We think a lot about how, on a farm, everything feels important and urgent at the same time. It's totally overwhelming when the pigs have escaped, but at the same time the propane delivery guy is here, and we have to finish packing the CSA. Which one do you go to?

A lot of the business planning techniques that Jake and I have developed have to do with decision making — not necessarily in crisis mode, but setting priorities ahead of time so, when we feel like we're in that crisis mode, we can more easily make a decision.

When I'm looking at things that need to be habituated, it's simple things like putting tools back in the same place every time. When I come out to transplant kale, I want to just transplant the kale. I don't want to spend my precious brain space looking for the tool. We look at the most frustrating thing that keeps happening over and over, and that's where we try to form a habit. We call them "stutter steps."

A lot of research has been done on these "little wins," so I try to mix in these ideas. If you can put a clip on your water hydrant that reminds you to turn it off, and that changes something for you, it makes you realize that you can make bigger changes.

On the business planning side of things, we try to habituate the priorities we've set. Our CSA is our most important customer. If I make a habit of prioritizing CSA members in my head, it makes it a lot easier when I'm in a day of crisis to say, "Oh, my gosh, there are three things I need to do, and one of them is send invoices to CSA members. I'm going to tackle that first."

SD: What do you hope Habit Farming will accomplish?

TM: I really thought I was just going to create a silly blog, and only my mom would read it and that would be the end of it. But it's been evolving around me based on other people's interest, which is kind of cool. If there's a way that I can create some sort of a platform for a more open and honest dialogue among farmers, for sharing within their own communities. That would be a really awesome outcome.

Right now I'm really just talking about it and getting the word out there that farming. is. hard. And there are people who are trying to make a go of it and trying to do it in a different way than it's been done for generations. It's really exciting, but it also needs the support of a lot of different people from a lot of different sectors. My hope is that all of those people start talking more.

The original print version of this article was headlined "Force of Habit | A farmer's side project talks viability, honesty and little wins"