Why doesn't Vermont call "youth violence" what it really is - male violence? 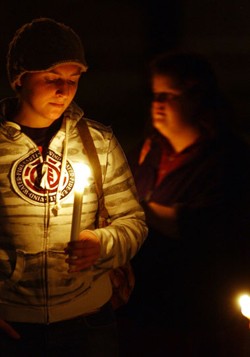 "Hello. I'm terrible at public speaking, so I may stutter," said the tiny redhead in a tiny voice, her microphone howling in the cool evening breeze.

But the woman didn't stutter, or even pause, as she told a crowd of some 50 strangers gathered on the Statehouse steps about the four times she'd been sexually assaulted as a child. Candles flickered in the night air, as the mostly female crowd huddled shoulder to shoulder, not so much to share bodily warmth as to show solidarity at this solemn event. "Take Back the Night" vigils like this one don't all happen on the same night everywhere - more than 100 people attended a similar rally last month in Burlington. Perhaps the level of violence against women and men is too immense to be memorialized on just one night of the year.

Years ago, some "Take Back the Night" rallies were women-only events. Monday night's vigil had a respectable showing of men. But, like most efforts to illuminate the hidden epidemic of violence against women - one in every four women is victimized at some point in her life, though fewer than half report it - these events are typically portrayed as "women's issues." Meanwhile, the people whose eyes really need to be opened - that is, the young men who are most likely to commit such crimes - aren't anywhere in sight.

Just consider a few local headlines from recent memory: In March 2005, Burlington was rocked by the brutal rape and murder of 31-year-old Laura Winterbottom. In August last year, the bodies of Linda Lambesis, 57, and Alicia Shanks, 56, were found shot to death after a gunman rampaged through Essex Elementary School, leaving three others wounded. In October, the body of University of Vermont senior Michelle Gardner-Quinn, 21, was found along a roadside in Richmond; she'd been the victim of a kidnapping, rape and murder. And just weeks ago, Bernard Congdon of Chittenden was found dead in his home, the apparent victim of a shooting by his own 16-year-old son.

What do all these incidents, and countless others like them, have in common? The answer is so obvious it's easily overlooked. The massacres at Virginia Tech and Columbine and every one of the more than 40 high-profile school shootings over the last 10 years were all committed by young males.

And yet, when extreme violence is perpetrated almost exclusively by boys and young men, their gender is seen as a given, as inexorable a force of nature as gravity or the shifting of tectonic plates. The media trot out a predictable list of culprits to flog - hip-hop music, violent movies and video games. Meanwhile, no one challenges the false logic: If girls and young women are listening to the same hip-hop music, watching the same movies and playing the same video games, why aren't they going ballistic in record numbers?

Vermont, like other states, pays a high price for ignoring the gendered nature of its violence. More than 85 percent of the people who commit murders are male, and the 15 percent of women who do are often reacting to male violence against them. Nationally, 90 percent of all violent crimes are committed by men, including 95 percent of all domestic assaults. It's estimated that between 85 and 95 percent of all child sexual predators are men, regardless of the victim's gender.

Jackson Katz, co-founder of the Mentors in Violence Prevention program, addresses this imbalance in the documentary Tough Guise. "Calling attention to the way masculinity is connected to these problems is not 'anti-male,'" he says. "It's just being honest about what's going on in boys' and men's lives."

Yet all too often, the public institutions best suited for collectively addressing issues of male socialization and how boys and young men learn to define masculinity - the schools - sidestep the gendered nature of the problem. In fact, some critics complain that timely opportunities for raising these issues are routinely ignored.

Consider the recent Virginia Tech shootings. One Burlington middle school teacher (who asked not to be identified) noted that her school held a moment of silence for the victims, but did not otherwise discuss the incident with students. (According to this teacher, the response to the Essex shootings was identical.) Although she discussed the shootings with her own students at the beginning of class, only half of the colleagues she spoke to did the same. Those who didn't either said they felt "unprepared" to open a meaningful dialogue on the topic or claimed it was "unrelated" to the day's curriculum.

A violent episode in the school itself was similarly "swept under the rug," according to this teacher. Recently, two boys in the cafeteria got into a fistfight that was witnessed by numerous students and was serious enough to require a police response. Nevertheless, this teacher says, students were warned the next day to "not discuss the incident" among themselves.

"What I've observed while teaching in Burlington is that there's this climate of 'Let's not talk about it,'" the teacher says. "Are we teaching kids to put widgets in a machine, or are we teaching them to live in the real world?"

Charles Johnson is statewide coordinator of Vermont Safe Schools, a program created several years ago within the Vermont Department of Education as a way to address issues of discrimination, harassment, bullying and other violent behavior. "Schools don't like to talk about violence, which is a weakness," Johnson admits. "It's a form of denial."

Johnson thinks the state has done an admirable job of addressing school violence from a legal perspective, such as by enacting anti-bullying and anti-harassment legislation. But he says there still is no comprehensive program in place for helping kids - boys, particularly - learn the social and emotional skills they'll need to function as responsible and self-aware members of society.

"We all have good intentions, and there are a lot of teachers and administrators who recognize what needs to be done," Johnson adds. "But we don't have the infrastructure in place yet to really deliver in a reliable way. There's a need for significant, systemic change."

One school that's taken a small step in the right direction is Bellows Free Academy-St. Albans. Like many public schools in Vermont, BFA-St. Albans has struggled with male violence in recent years. As one teacher at the school recently noted, it's not unusual to have several fights occurring on school grounds every week, and even to have police and/or ambulances there on a daily basis.

The teacher (who also asked not to be identified) believes the severity of these incidents has mounted in the last 3 to 4 years. "Within the community, [the violence] has definitely increased," this teacher asserts. "The kids are seeing it at home and they just think it's a normal way to handle their problems."

In the past, the only tool administrators had for dealing with such violence was an in-school suspension. Katharine Hutchinson, director of guidance at BFA-St. Albans, has been at the school for 25 years. She disagrees with the assessment that violence is on the rise there. Still, she admits it's an ongoing challenge.

"When schools suspend kids, it doesn't necessarily mean they're going to learn something from it," she says. "It might just mean they're fighting outside of school instead."

Recently, however, BFA-St. Albans added a new tool to its toolbox - a pilot program called Project Safe Choices. Part of the Domestic Abuse Education Project (DAEP) at Spectrum Youth and Family Services, the program targets young men ages 12 to 17 who have a history of abusive or violent behavior. Like DAEP, which was created for adult male batterers in the criminal justice system, Project Safe Choices helps young men recognize the thoughts, emotions and cultural assumptions that fuel their violent tendencies. Ultimately, the goal is to help them understand the consequences of their behavior, so they can learn to make better choices in the future.

Justin Morgan Parmett, program coordinator of Project Safe Choices, has been helping communities from St. Albans to Rutland to St. Johnsbury set up violence-intervention classes for young men at risk. As he travels around the state talking to teachers, administrators and community leaders, Morgan Parmett says he hears a common refrain.

"They've all noticed a drastic increase in violent and problematic behaviors," he says. "I think there's something happening in our society. There's been a shift where violence is becoming more normalized."

Like DAEP, Project Safe Choices starts by challenging young men's underlying assumptions about manhood. As Morgan Parmett explains, every course begins with an exercise in which the participants list the characteristics that define a "real man." The same is done to define a "real woman."

"No matter where I go, no matter who I speak to - whether they're 12-year-olds, 17-year-olds or 50-year-olds - when we do the 'man-in-the-box' exercise, everybody comes up with the same answers," Morgan Parmett says. "Everybody knows that to be a man means you've got to be tough, not back down, and you've got to be able to fight."

The next step, Morgan Parmett explains, is to deconstruct those assumptions and make a new list of characteristics that these young males would use to define an admirable person of either gender. Typically, those characteristics - such as honesty, integrity, loyalty and generosity - don't make the original list for a "real" man or woman.

Morgan Parmett says he's often asked why there's no similar course for girls and young women, especially since female violence is also increasing. His answer makes sense: The overwhelming majority of violent acts in society are still perpetrated by boys and young men.

Morgan Parmett says that schools, parents and the media are still reluctant to label this problem "male violence," partly because that term may be seen as "anti-male." Nonetheless, he thinks that reluctance reflects a more widespread cultural denial of the pervasiveness of violence in our society, from the household to the international scene. It's no coincidence, he notes, that the most recent up-tick in school violence dates back 4 or 5 years, to around the start of the wars in Iraq and Afghanistan.

Hutchinson at BFA-St. Albans agrees. "That's the elephant in the room," she says. "We're a violent society and the schools have to deal with that, too."

But Hutchinson is cautiously optimistic about Project Safe Choices. She says that, after some of her counselors sat in on a DAEP group of adult batterers, several of the men participating asked if they could talk to student groups. "They said, 'If we'd had this at our high school, we wouldn't be in this place now.'"